Many small towns like Elkader still have opera houses, in varying states of repair.

The lobby of the Elkader Opera House seems like a lousy place to park a couple of fire trucks. But at one point in its 109-year existence, fire trucks were indeed part of the opera house’s interior design scheme. At other times the opera house also served as a roller rink, a dance hall, library, city hall, and museum.

On a rainy Sunday afternoon in mid-August, I made the two-hour drive from Iowa City to Elkader to visit its Opera House. The purpose of the trip, however, was not to look at old motor-oil stains on the concrete or to learn about the connection between Elkader and its sister city of Mascara, Algeria. The reason was to attend the next show of the Iowa Opera House Project. The Iowa Opera House Project is a roadshow featuring a handful of acoustic musicians performing on the stages of Iowa’s remaining opera houses.

The History of Opera Houses

More than 300 such opera houses, in various states of repair, are scattered across Iowa. According to a 1993 book called The Opera Houses of Iowa, written by George D. Glenn and Richard L. Poole, the state once boasted nearly 1,000 opera houses. Sam Knutson, the Iowa City musician behind the Opera House Project, intends to take the show to as many of the remaining venues as possible.

Like a lot of people, Knutson didn’t give the existence of opera houses much thought until he was invited by a fellow musician to attend a show at the What Cheer opera house. A stage light clicked on above his head.

“A friend of mine took me to see his show at an opera house that was built in 1895,” Knutson said. “It is a really great venue and it got me thinking about wanting to do a show there.”

So Knutson started looking into what his options were and discovered that there were lots more venues similar in age and—more importantly for a musician—acoustics. He also found out that many opera houses had fallen into disrepair, had burned down, or were torn down or set up for some other use by the community.

“A lot of the people I was talking to were in their 70s and 80s,” he said. “I found myself talking to old ladies while developing the shows. It’s a really awesome way to spend the afternoon. They know more about these opera houses than most people. I thought, ‘This is a thing that isn’t going to be around if someone doesn’t pick up the torch.’ ”

Authors Glenn and Poole learned that opera houses were built not as venues for operas but as places for theater. In the 18th and 19th centuries, the theater held vulgar connotations in some circles. Quaker-dominated Philadelphia, they write, saw theater as immoral and community leaders went so far as to pass a law in 1787 banning theatrical productions. The ban was circumvented simply by calling the performance spaces “opera houses.”

When rail lines headed west, so did the opera house concept. Opera houses helped small towns rise above the perception of being mere frontier outposts lacking culture. “Between 1850 and 1915, all types and sizes of Iowa communities had their opera house,” Glenn and Poole write. “A town could not call itself civilized unless it could advertise programs in its very own opera house.”

The Elkader Opera House underwent a major renovation in 2004. Built in 1903, the original structure replaced the old Turner Opera House that had been destroyed by fire. The new building lured theater companies from Chicago and Minneapolis. Kay Moser, an active part-time manager of the Elkader Opera House, has worked with a local theater group since 1972. Moser said the building has been through a lot. 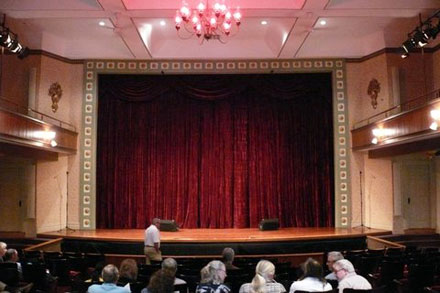 The Elkader Opera House has undergone many uses in its 109-year history, but it’s currently a performing venue once again.

“At one time the main steps were on the side of the building,” she said. “They were rebuilt in their original location and widened at the bottom. The seats were redone using the original backs, and the decór was updated. We think this is the crown jewel.”

The effort was worth it, as the building is listed on the National Register of Historic Places. 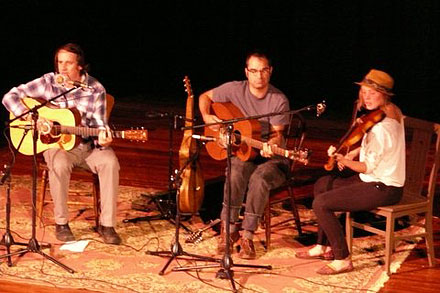 The drive to Elkader was worth it as well. Knutson, staring into the yellow spotlights at the 35 or so people scattered around the main floor and up in the balcony, said he felt the Elkader venue was special too. So far the Iowa Opera House Project has visited nine opera houses. The nine additional dates that have been scheduled through January 2013 are posted at www.theiowaoperahouseproject.org.

Before he left the stage, Knutson invited Jordan Sellergren to join him for a few tunes. Sellergen, who performs under the name Milk & Eggs, then spent her allotted half hour playing tunes from her growing catalog of originals. Following a brief intermission, Dustin Busch sat down with a 1920s-era lap guitar and worked through choice covers, including songs from Canned Heat and, with the aid of fiddler Megan Drollinger, “Ashokan Farewell,” the Jay Unger song made famous by Ken Burns’s The Civil War.

The afternoon concluded with Anamosa guitarist John Waite, joined by Busch and Drollinger. Each show is a little different, with the great Dave Moore playing some gigs and Des Moines-based Thankful Dirt playing others.

As the players performed, it became clear what Knutson finds so fascinating about the opera houses. The sound quality, the history of the opera houses, the whole atmosphere is unlike most other acoustic music experiences you’re likely to come across.

“The audience is always responsive and the musicians all join in,” Knutson said. “It’s a group effort. I’m just blown away by it.”

Crying Till You Laugh: "Go On" | Go On is a Sitcom Based on Grief