As the intense heat softened into the night, and the glow of solar lights brightened tender branches, the scene spoke of new beginnings—the start of a you-pick fruit farm that would soon offer Fairfield organic, seasonal fruit from June to November. But for Clint, the eight-acre plot of land holds more than potential—it holds the memories of a man who helped him through a tumultuous adolescence and inspired him to start planting trees.

The oldest tree in King Edward’s Orchard is a Kieffer pear that Clint helped to plant 23 years ago. Clint was in fifth grade and had switched schools, where he met fellow student Aaron Parsons and later his dad, Edward Parsons. They noticed Clint sat outside over lunch break, and invited him to come with them one day.

“From that day forth he joined us for lunch every day,” said Aaron. He described the relationship of Clint and his dad as the “bond and love of father and son, and the respect of a brother.”

Clint was overwhelmed by the kindness the Parsons family showed him. “Aaron was sick one day, and Ed picked me up for lunch anyway,” said Clint. “He paid for me to be in Boy Scouts; he did everything for me.”

Ed owned the land where the orchard now stands, and he took his son and friends there often. “We were a ragtag bunch of kids,” Clint said, “and Ed took care of us.”

One day, Ed showed up to school with a pear tree in the back of his car. He brought the boys to the land where they planted it. “He spent every day he could tending to the land,” said Aaron. “He always had a deep respect for nature and animals.”

Since then, the land has changed ownership several times. But in 1999, Aaron  and Clint pooled their money to buy the land back. “We bought the land so Ed could live on it,” Clint said.

But on March 23, 2010, the unexpected happened. Ed had a stroke and died at 66 years of age. Just a week before his death, he had approached Clint with the idea of planting more fruit trees by the original pear. A few weeks after Ed’s memorial, Clint began clearing brush from the land and planted the trees Ed had wanted there.

After Ed passed away, they talked about plans for the property. “We spoke about maintaining the original integrity of the land,” Aaron said, “and what we should do in my dad’s memory.”

He said Clint called him one day asking if he could plant more trees, and he quickly agreed. Clint’s girlfriend, Anna Sica, said the project was therapeutic for him. “It brought him a lot of happiness to watch people plant their trees,” she said.

Clint confessed the same. “My favorite part is seeing how people interact with nature,” he said. “I like seeing what kind of tree they pick, how they plant it, how long it takes them.”

It took Clint and Aaron a while to think of the orchard as a potential business. “We just wanted a way to remember Ed,” Clint said. 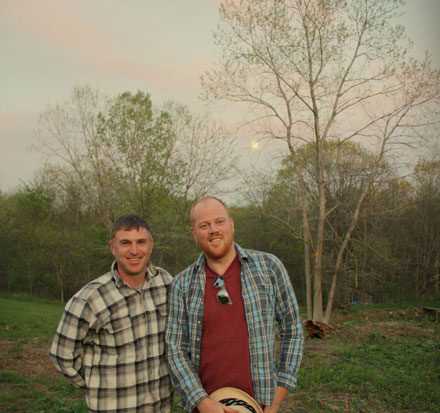 Clint Stephenson and Aaron Parsons enjoy the land after a long day of planting cider trees.

He helped close friends and family to pick out and plant trees in Ed’s honor.

He began inviting acquaintances to plant trees as well, offering to share the fruit at harvest with those who planted it. “I wanted friends and family to have roots here and always have a reason to come back,” Clint said.

Pretty soon Clint had established relationships with Oakwood Nursery and Abundance EcoVillage, and found himself spending hours reading books and skimming websites to learn how to grow fruit trees. Despite what he heard about the difficulty of growing organically, he has never used chemicals. He plans to apply for organic certification as his trees mature.

By the end of 2010, Clint had planted roughly 60 trees on the property.

“It’s everyone’s dream to turn their passion projects into a business,” Anna said. Clint began to realize then that he could sustain all of his work by opening the orchard to the public and selling the fruit by the pound.

He and Aaron decided to call the business King Edward’s Orchard. “We used to call Ed ‘King Eddie,’ ” Clint said. “He always thought of himself as a king out here at the land.”

With 200 trees in the orchard to date, Clint and Aaron are looking to keep expanding next year, and welcome the community to get involved. “The criteria for someone planting a tree is that they have a strong tie to the community,” Clint said, “and that their path will cross with the orchard again and they’ll give back to it if they can.” 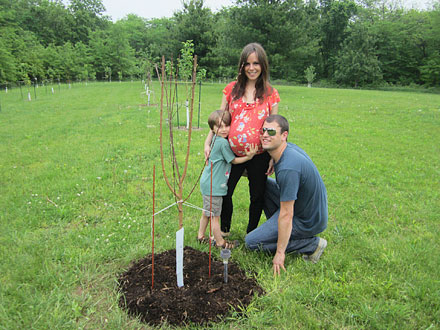 For one family in Fairfield, planting a tree at the orchard signified establishing their own roots. On May 5, Fairfield resident Alea Scarff planted a peach tree with her five-year-old son Nikolai and her fiancé, Noah Lobdell. The couple planted their tree just three weeks before they had their baby, Dimitri. “I was very pregnant, and we were moving into our new house,” Alea said, “so it was very symbolic for us.”

Alea said she admires the project. “I think that it’s a really sweet thing to do, it creates a sense of community,” she said. “I love it that so many people are involved: families, single people, old and young.”

This spring, Clint wanted to expand and plant vintage English cider varieties to make local hard cider with. When he found himself short on capital, he decided to fund raise. “I sent out 20 text messages, and within a week I had raised $3,000,” he said.

Aaron and his wife, Jessica, who were living in Israel at the time, made a trip to Iowa to help plant 70 cider trees with him. “Planting a fruit tree is a very special experience,” he said.“You are producing life, and that tree might be there long after you are gone.”

With a record-breaking dry year, Clint faced challenges even with support from his friends. From the start, he has hand-watered his trees by drawing water in a bucket from a small pond on the land. This summer, this task took hours nearly every day. “I try to take the best care of them with the resources that I have,” said Clint, who has lost only four trees from the drought. Anna said his dedication has been unwavering. “He loves the trees,” she said. “They’re his babies.”

Thanks to help from a childhood friend, Clint now waters his trees with a hose. Leela Freeman visited from San Francisco in July and planted a pear tree at the land. A few days later she surprised him by donating a utility pump to the orchard.

“His friends help all of the time,” said Anna. “As soon as he started fund-raising, everyone supported and donated; I think he [Clint] was surprised by that.”

A Vision of Variety

This year Clint is taking appointments to pick Kieffer pears in September and October. Kieffer pear trees are hardy, with fruit good for baking and preserves. “They are great,” he said. “Anna has made pear bread pudding and pies from them.” Next year he’ll have Stanley plums, and Kieffer and gourmet pears.

King Edward’s Orchard hosts more than 30 varieties of fruit trees. Clint said that in a few years the orchard will offer ripe seasonal fruit from June to November.

“It’s not going to be a once-a-year type of thing,” he said. “We’ll have fruit all summer, fruit that you can pick yourself.”

Ed Parsons is never far from Clint and Aaron’s mind out at the orchard. Although they wish “King Eddie” could have lived to retire on the land, they think he’d be happy that it’s become a place where the community spends time.

“My dad’s vision of the land was a place that anyone could come to reflect, regroup, and reconnect with nature and friends,” said Aaron. “This was my dad’s legacy and we hope to continue that tradition.”