Everyone – including President Obama—has jumped on the bandwagon for Homeland, Showtime’s melodrama about a mentally ill CIA agent named Carrie (Claire Danes) on the trail of a brainwashed U.S. congressman (Damian Lewis) who’s secretly working for Al Qaeda (Sunday, 9 p.m.). I appear to be the only holdout, and nothing in the second-season premiere has changed my mind. I mean, if the concept isn’t silly enough (did I mention the internationally respected journalist who’s really a sexy double agent for the terrorists?), the performances take it over the top.

Danes plays “crazy” by furrowing her brow and wildly walling her eyes. Carrie is a woman you wouldn’t put in charge of a neighborhood cleanup crew, and yet the CIA entrusts her with the safety of the nation. “We have no other options!” the CIA chief cries before sending Carrie off on a delicate mission to the Middle East. That’s right – the entire U.S. government HAS NO OTHER OPTIONS than to work with this disturbed lady in an incongruously fabulous hairdo.

Now, if you were a traitorous congressman trying to pass as a loyal American, wouldn’t you play it cool whenever someone said the word “terrorist,” rather than twitching, sweating and looking guilty as hell? In Homeland, oddly enough, such suspicious behavior doesn’t prevent you from being considered as a vice-presidential candidate.

If President Obama finds this series realistic, I’d have to question his foreign-policy bona fides. Gov. Romney, I think I see an opening. 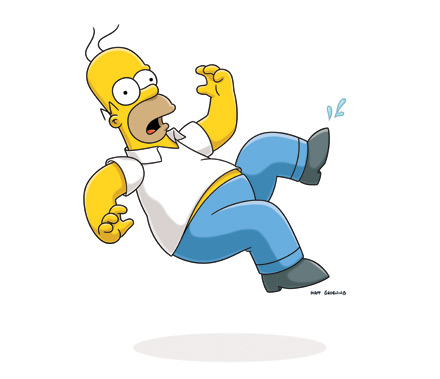 Homer—just as funny as ever in The Simpsons (Fox).

After 20-plus years of The Simpsons, you tune in to every new season wondering if they’ve still got it. Wonder no more: The kickoff for 2012-13 is breathtaking in its comic virtuosity. Densely packed with gags and allusions, it follows Bart’s journey to New York City in search of a lost love (voiced by Zooey Deschanel). The satirical targets— from Saturday Night Live to Mamma Mia to Ayn Rand—are demolished with a light flick of the wrist. In one throwaway joke, Bart witnesses the filming of Ken Burns’ The Making of the Empire State Building: Part I, The Basement.

Indeed, there are more successful jokes in this one episode of The Simpsons than there are in entire seasons of most TV comedies. I am in awe.

Part of the fun of a new TV season is watching the awful series before they’re axed. Thus we have The Neighbors, which will surely get a few ABC executives fired by November.

Recycling alien-next-door clichés (My Favorite Martian, The Addams Family, The Munsters), it brings us a group of extraterrestrials who have assumed human form in the American suburbs. They startle their neighbors (Jamie Gertz, Lenny Venito) by doing “funny things,” like throwing dishes out the window rather than wash them. And they speak in that stilted manner cribbed from the Coneheads. When it’s time to bid the humans goodbye, for instance, the alien leader claps his hands and shouts, “Community, disperse!” At which point his identically clad minions run away en masse.

The actors are so bad that you can’t help wondering if they’re deliberately sabotaging the production in an attempt to get out of their contracts. When the script resorts to a double-entendre regarding a little boy named “Dick,” you can hardly blame them.

The broadcast networks are all jostling for our attention at the start of the new season. With Last Resort, ABC has one of the showiest entries, involving nothing less than world destruction. A U.S. submarine is given orders to nuke Pakistan, but Captain Marcus Chaplin (Andre Braugher) smells a rat. When he refuses the order, the government fires on its own sub, which hastily takes refuge on an exotic island. Though the plot is apocalyptic, some of the scenes have an appealingly human scale, conveying a sense of normal individuals making decisions with global consequences.

With the world in the balance, I can’t think of anyone I’d rather have in charge than Braugher. Captain Chaplin maintains his cool even as he threatens a rogue presidential administration with annihilation: “We will not hesitate to unleash fiery hell down upon you. I give you my word.”

He—and ABC —have got my attention.

As a Twilight Zone and Night Gallery freak, I’m all in favor of horror series that make me jump behind the couch. In 666 Park Street, an innocent couple (Rachael Taylor, Dave Annable) move into a 13-story Manhattan apartment building where residents make deals with the devil. The devil takes the form of a sinister-looking bald guy (Lost’s Terry O’Quinn), who owns the building with his seductive wife (Vanessa Williams).

So far, the horror isn’t working. In 2012, it’s hard to frighten an audience with “scary” numbers like 666 and 13. The generic minor-chord score sounds like it was purchased from the iTunes monster-movie store. Compared to FX’s standard-setting American Horror Story, this seems like child’s play.

Still, the actors are effective, and you do keep wondering what’s around the next dimly lit corner. I’m going to give 666 Park Avenue another couple episodes and keep the space clear behind the couch, just in case.