As a midwife, I work in Indonesia and the Philippines, receiving babies into the world and educating midwives, doctors, and nurses to practice gently, with love. My roots are in Iowa; Fairfield is my hometown. All the concerns faced by mothers in Asia are confronting mothers right here at home in the heartland of America.

According to the World Health Organization, 981 women die every day on earth from pregnancy and birth-related complications.

If two 747 jets fell from the sky killing  832 passengers every single day, it would be front-page news. You can be sure that people would not fly until the problem was solved. However, women are dying daily in the prime of their lives. They are not elderly or sick—they are pregnant and birthing, and their deaths are mostly preventable.

According to Amnesty International, the number of maternal deaths is significantly understated because of a lack of effective data collection in the U.S. Mothers most at risk are minority, poor, indigenous, immigrant, or displaced women and those who speak little or no English and have inadequate or no health insurance. Many of the women who come to midwives for reproductive health services are in these categories. Without the cost-effective, very personal mother-to-midwife model of care, even more women could fall through the cracks and die.

I blog for the Huffington Post, where I share my process of working toward real solutions to the high maternal and infant mortality rates. I welcome the sharing and the comments to my blog; however, this one astounded me:

“This is why we have hospitals. While it’s a romantic idea, midwifing is a relic of the past and needs to be outlawed.”

Here is my reply:

“Clearly, when needed, hospitals and the specialists who staff them are a miracle. That being said, I am convinced that the midwife-to-mother model of care is the best way to determine if the risks for mother and baby are high. Mothers in the care of midwives have the best possible chance for better birth outcomes, with less use of technology and much less cost. In the experience of the Bumi Sehat childbirth clinics in Bali and Aceh, where over 4,000 babies have been born, midwives are the care providers who take the time needed to prevent tragedy.

“If you believe that hospital-based childbirth, attended exclusively by doctors of obstetrics and gynecology, is the answer, consider that although the U.S. spends more than any other country on childbirth technology, statistics released in September 2010 by the U.N. place the United States number 50 in the world for maternal mortality. American mothers have a higher risk of dying from complications of pregnancy and childbirth than if they lived in some countries in Asia and the Middle East, and nearly all of Europe.

“Look up the facts, and then let me know if you still think midwifery should be outlawed.”

This dialogue isn’t academic—it’s at the heart of how we care for our mothers, babies, and families, not just abroad but right here at home. While I dotted that last sentence another woman died in childbirth. My friend Christy Turlington Burns nearly died following the birth of her first baby in the U.S. She was blessed to have a skilled midwife who activated a team of medics to save her life. Christy has established “Every Mother Counts” in response to the need for action to reduce the number of maternal deaths.

My own sister Christine had health insurance and was under the care of an OB-GYN in the U.S., yet she died of a preventable complication of pregnancy. That was 21 years ago, and losing her has driven my passion for preserving life.

Perhaps as an American you feel safe, but do you know that between 1990 and 2008, maternal mortality was reduced by globally 34 percent, while it nearly doubled in the U.S.? You can clap your hands and say, “I do believe in technology,” but it won’t change anything. If you personally wish to see significant reduction in the numbers of mothers and babies dying, stomp your foot and shout: “I support midwives!” 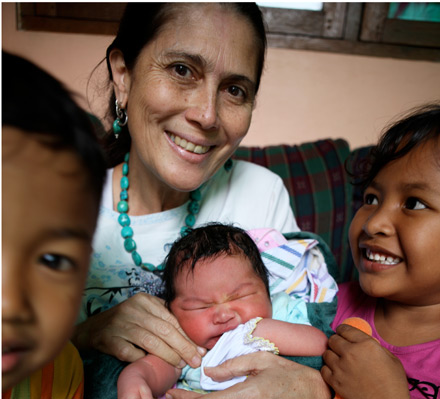 Midwives stand on three strong feet: respect for nature, honoring culture, and sound science. We keep it simple, we save lives. Last December I, a mere midwife, was chosen as the number one CNN Hero of 2011. Over 16 million television viewers cried and jumped up and down with joy, because we occupied healthy childbirth as a human right.

As Iowans, you have a human right to the best possible healthcare. Midwifery is still a controversial subject in Iowa, where it is prohibited by statute, judicial interpretation, or stricture of practice. It is the mothers, babies, and families who pay the price of not having this essential health service available to them. When you cast your votes, ask yourself, who will support the cost-effective, life-preserving art and science of midwifery care?


How You Can Help Robin

Unfortunately, these goals, which advocate for the basic human right to health care and are targeted to be achieved by 2015, are still a far-off dream. You can help by taking action. Support Robin Lim’s work by donating to Sakthi Foundation, 1507 Lone Oak Circle, Fairfield, Iowa 52556 Attn: Bumi Sehat (Healthy Mother Earth Foundation).  Visit her website: http://www.bumisehatbali.org/