Last year, I panned the pilot of Happy Endings, calling it “another would-be hip, fresh young sitcom about six friends dealing with relationships.” While I wasn’t looking, though, Happy Endings actually turned into the hip, fresh young sitcom it wanted to be. Now, in its new season (Tuesday, 8 p.m., ABC), I proclaim the series one of TV’s best comedies. (Hopefully you’re not reading this column for its philosophical consistency, but for its endearingly erratic mood swings.)

The show finds a loopy wavelength and challenges viewers to get on it. We’re in a surreal version of Chicago, where the characters do silly things while talking in ironically cutesy-dorky urban lingo. This week, ex-lovers Alex (Elisha Cuthbert) and Dave (Zachary Knighton) are getting involved again but want to keep it “cazsh.” A prospective apartment is inexplicably deemed too “Shia LaBeouf-y.” When startled, Penny (Casey Wilson) shouts out “F. Murray Abraham!” and “CCH Pounder!” The six stars—all great comedians—deliver their bizarre lines so fast that you can barely catch them. I suggest DVR-ing, then rewinding to laugh at what you missed.

I can’t keep it cazsh with Happy Endings. I’m deeply in love. 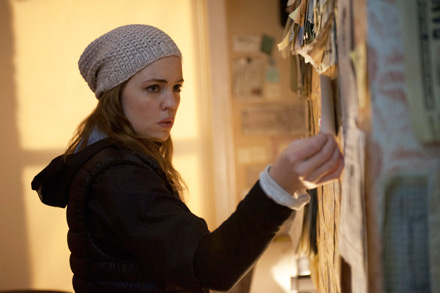 The espionage series blew me away when it premiered last week, and it blows me away again in episode two. At this rate, I’m going to be a wreck by the end of the eight-part run.

This installment does a beautiful job of complicating life for Sam Hunter (Melissa George), an operative for a private spy outfit. Sam is working undercover in the home of a ruthless tycoon who will brutally kill her if he finds out her real identity. Believe it or not, that’s the least of her problems. She’s being stalked by other assassins, and she’s not even sure why. Plus, someone in her own organization appears to be setting her up. We feel an overwhelming sense of menace as Sam creeps through the tycoon’s mansion, with its ominous staircases and basement torture chamber.

One of the things I love about Hunted—along with the brilliant acting and stylish filmmaking— is its moral gravity. Yes, it’s an exciting thriller, but it also takes a hard look at the spy’s life. Here, dead bodies are not just set decoration. Murders are brooded over, and Sam is clearly paying a price for the choices she’s made. I want to see things end happily for her, but I’m not optimistic. 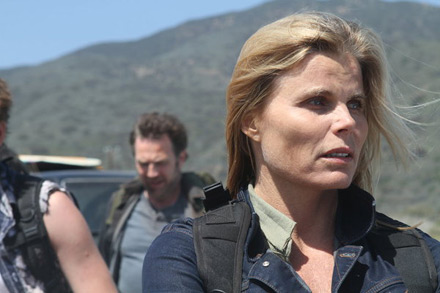 Mariel Hemingway in Rise of the Zombies (photo by SyFy)

In this made-for-Halloween TV movie, scientists (LeVar Burton, Mariel Hemingway) hole up on an island to find a cure for zombie-ism. The special-effects team spares no expense here, as scores of zombies are gruesomely shot, slashed, and stabbed; the budget for extras alone must have been astronomical. The makeup crew are obviously having the time of their lives, using every can of red paint in the Syfy backlot.

In the middle of this over-the-top mayhem is onetime important movie actress Mariel Hemingway. You can’t help but reflect on the transience of Hollywood stardom as you watch her struggle to make her lines heard over the high-decibel snarling and chomping. Poignantly, Hemingway tries to turn in an actual performance, rather than just mouthing her awful dialogue and picking up her paycheck. I give her credit: That takes a lot of nerve while your costars’ brains are whizzing past your head. 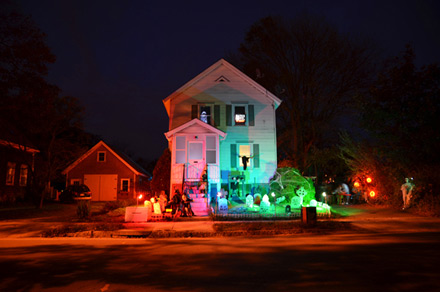 This documentary teaches us that “home haunting” is a recognized hobby. It follows three families in a Massachusetts neighborhood engaged in spooking up their properties for Halloween. A couple of them are in it for fun and family togetherness, but for a guy named Victor, it’s a life-or-death matter (well, mostly death).

For months, Victor stresses out about creating realistic corpses and monsters, having conniption fits if he doesn’t get the gory details just right. As he dreams of being a professional-level haunter (yes, there is a pro level in this field), his family suffers from neglect, wondering why he expends all this effort on Halloween. Meanwhile, the other home haunters in the neighborhood have a jolly old time with their admittedly less spectacular displays.

I think we can all see the lesson here: Stop and smell the vampires. 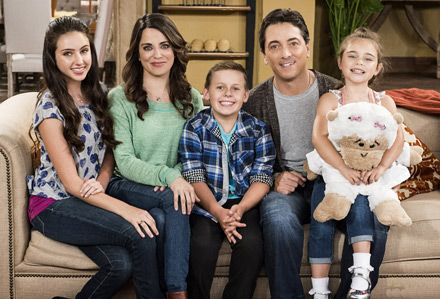 Here’s definitive proof that the Earth is traveling around the sun: 1970s child star Scott Baio is now starring in a new sitcom as a middle-aged dad. Once you get over the receding hairline, you can enjoy Baio as a TV star who retires to raise his three kids while his wife goes back to work.

For this Happy Days veteran, being warm and funny in the midst of household crises is like falling off a log. Baio has the comic rhythms down pat, turning the age-old clueless-dad premise into something special. He’s blessed with a terrific supporting cast, including his put-upon wife (a classic turn by Alanna Ubach) and three fantastic child actors (Ryan Newman, Jackson Brundage and Bailey Michelle Brown).

I hope I live to see these kids star as middle-aged parents in their own 2040s sitcoms.

The Perks of Being a Wallflower | You Gotta Have Friends