ARGO is a riveting drama based on actual events during the 1979 Iran uprising, when Iranians stormed the American Embassy taking 52 Americans hostage. Argo reveals the declassified saga of six American diplomats who escaped capture, took refuge with the Canadian ambassador, and were smuggled out of Iran by the CIA. The film’s hero is CIA “exfiltrator” Tony Mendez, played by Ben Affleck, who directs the film as masterfully as Mendez directed his 1980 mission. 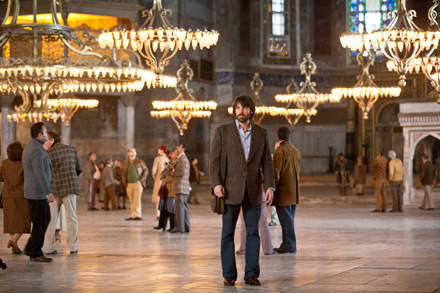 Mendez invents the ruse of a fake feature film project called Argo, to pose the six Americans as a Canadian film crew scouting locations in Iran, so they can exit the country undetected. A handful of Hollywood insiders arm Mendez with a movie script, some scene sketches, and a business card. The real Mendez describes his mission in his book, The Master of Disguise (2000). His account, along with Joshuah Bearman’s 2007 article for Wired magazine, “How the CIA Used a Fake Sci-Fi Flick to Rescue Americans From Tehran,” inspired this superb screenplay by Chris Terrio, who tempers a tense story with hilarious dialogue.

What works about this movie can hardly be squeezed into a few column inches. First, the opening narrative cleverly reviews the brief history that led to the Iranian uprising and acknowledges the Iranian perspective. Next is the stellar cast that includes Bryan Cranston, John Goodman as award-winning makeup artist John Chambers, Alan Arkin playing a composite character of several Hollywood filmmakers, and six unfamiliar actors whose portrayals of the American diplomats were thoroughly convincing.

Argo delivers some fine storytelling that’s true enough by Hollywood industry standards, whose “bill of rights” allows filmmakers to doodle with the facts to tighten the suspense and move the story forward. And while Argo does take liberties, the exact historical details vary according to which account you read. Mostly, the factual alterations seem minor, except that some accounts mention one or more people who accompany Mendez on his dangerous journey. Either way, the film is a tribute to Mendez’s extraordinary bravery, along with the mercy and generosity of the Canadians.

Argo has received well-deserved praise and Oscar buzz, and personally, I found the film so exhilarating that I applauded. But the film also generated controversy regarding the many Americans whose 14 months of captivity were marginalized in this story. This plagued me too. Once the elation subsided, I couldn’t stop wondering what became of the hostages. And I wished Agent Mendez had rescued them too, which is actually what he believed his Iran mission would be. His Operation Bodyguard proposed to appease the Iranians using a dead body double for the Shah, whose asylum in the United States had instigated the Embassy takeover. The White House rejected it. 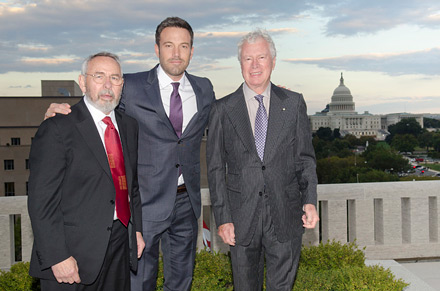 The bottom line is that the Argo mission is a story that needed to be told, and no one could have done it better than Affleck, Terrio, and the rest of the cast and crew. The rescue is a story of heroism that leaves us in awe. And just might make us want to be Canadian.  A