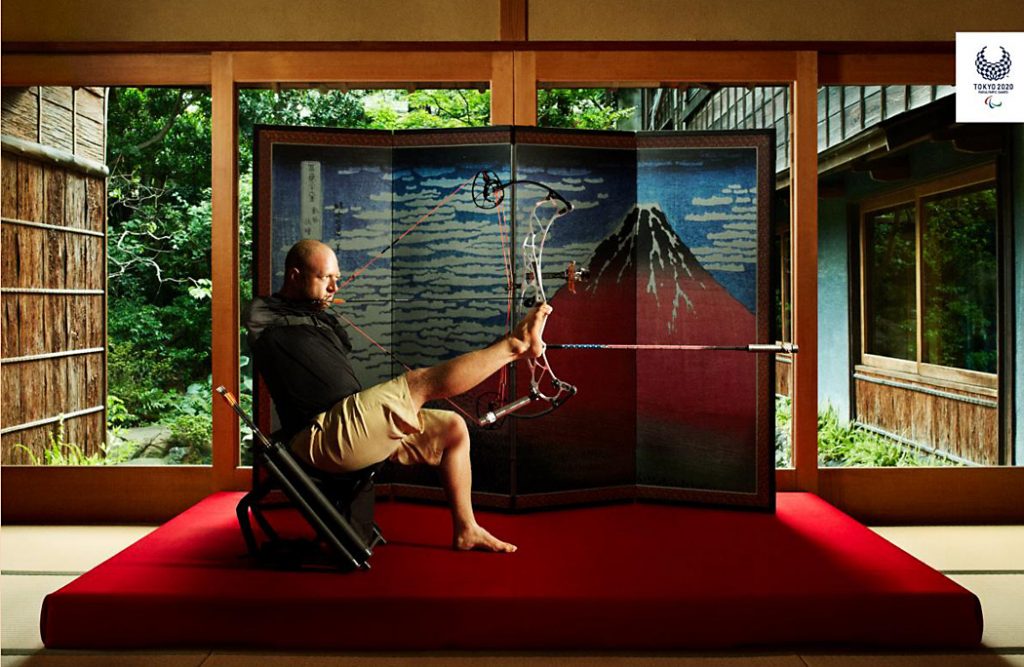 Do not try this at home. Step 1: Have a friend zip-tie your hands behind your back. Step 2: Sit down in a chair. Step 3: Load an arrow onto a bow with your feet. Step 4: Maneuver the bow so you can hook the string onto a release attached to your shoulder. Step 5: Push the bow away from your body, a move that requires about 60 pounds of force. Step 6: Take aim at the target 70 meters away and fire when ready.

Now repeat that in front of thousands of attendant spectators and millions of remote viewers while locked in competition with some of the best archers in the world.

Sound difficult? It is. Even for Matt Stutzman. Stutzman, the 29-year-old silver medalist in archery at the 2012 Paralympic Games in London, at first struggled to perfect his competition technique. But perfect it he did, thanks to countless hours firing arrow after arrow at an indoor range in Iowa City. In three years, his hard work took him from obscurity to the pinnacle of competitive archery.

Stutzman is an unassuming Olympian. Calm and polite, yet supremely confident in his abilities, Stutzman’s first task when meeting someone new is to put that person at ease. There is something unique about him, and it’s not just his skill with a bow and arrow.

Born without arms, Stutzman does things everyone else does. And he does them without seeking special treatment. “I’ve been this way my whole life,” he said. “It’s a lot easier for me than for someone who had arms and then lost them.”

He learned how to shoot a bow and arrow at 16 so he could hunt with his father near the family farm in Kalona. “I saved a long time to buy that bow,” Stutzman said. “But someone stole it out of the bed of a pickup truck and I didn’t have money to buy a new one. So I just went back to hunting with a gun.”

It would be a decade before Stutzman picked up another bow and arrow. When he did, a friend said he should make a video of his shooting style and post it on YouTube. Stutzman did and the video went viral.

“People started recognizing me,” Stutzman said. Shortly afterward he went to a tournament where he caught the eye of the Mathews bow company. They immediately sponsored him, a move a friend of his viewed with suspicion.

“I have a friend who always says what he’s thinking,” Stutzman said. “He told me the only reason Mathews sponsored me was because I shoot with my feet.”

“That was my motivation,” he said. “I told him I was going to be the best in the world.”

And so the hard work began. Five days a week Stutzman drove from the home in Fairfield he shares with his wife and two sons (now three sons) to Fin and Feather in Iowa City, where he practiced in the indoor range. Fin and Feather owner Roger Mildenstein recalled the first time he saw Stutzman.

“I saw this guy get out of his truck and start hauling all this gear into the store,” Mildenstein said. “I said, “Do you mind me asking how you shoot?’ Matt said, ‘Get me a chair and I’ll show you.’ ”

Stutzman showed him. The two men became friends. Mildenstein offered Stutzman free use of the indoor range. Stutzman accepted. At first his aim was, well, loose.

“See all those holes?” Stutzman asked, pointing to the blue foam pads on the wall at the back of the range. “I feel bad. I’m responsible for most of them.”

Stutzman reckons he shot between 200 and 250 arrows a day, five days a week, for a couple years. Eventually, the only damage he inflicted was on every target placed in front of him.

Mildenstein pointed to a series of targets he’d posted on the wall of the range. Stutzman had obliterated the center of each target.

“Those are all 300s,” Mildenstein said. “That’s really tough to do. You’ve got to be mentally tough to do that.” The mental aspect of shooting eventually proved to be the hardest part for Stutzman to master.

In 2010 Stutzman started attending training camps to improve. The camps were part of the U.S. training system. The next year the U.S. team invited him to try out for the squad.

“I outshot everybody,” Stutzman said.

He qualified for the 2011 Parapan Games in Mexico as the highest ranked archer in the field. But he didn’t finish that way.

“I got fourth place. I lost my concentration. Learning to deal with the pressure. That’s the biggest thing.”

By the time he tried out for the U.S. Paralympic team, he had the pressure thing under control. He shot a 699 out of 700 and qualified first. “I outshot all the guys on the Olympic team.”

Stutzman missed winning gold at the London Paralympics by one point. He lost in the heated final of the Men’s Compound Open finals to 18-year-old Jere Forsberg of Finland. Fosberg, who shoots from a wheelchair and has full use of both arms, matched Stutzman bull’s eye for bull’s eye and in the end simply outshot Stutzman.

“It was the calmest match I had,” Stutzman told the London Telegraph. “It was hard to explain but I felt at peace, I loved that match. I felt so good, whatever I did I’d come out a champion.”

Life has changed for Stutzman following his Paralympic success—he’s working out details for appearances on the late-night talk shows, has a growing list of sponsors, and has been able to build his own indoor range at his home.

“Life is way different now,” he said. “I don’t have to worry about how I’m going to pay my bills. As a person with no arms, it was hard to find a job. I could match someone qualification for qualification, but when it came down to it, they hired the guy with arms.”

Now Stutzman can spend more time with his family and prepare for the 2016 Games in Rio. Now Stutzman doesn’t have to worry about exceeding anyone’s expectations but his own.