FACC Executive Director Rustin Lippincott along with staff and board members have worked tirelessly to get the new venue on its feet to host shows, produce special events, and welcome groups from all over the state. (photo © 2012 Werner Elmker)

Spend 30 seconds with Rustin Lippincott and you realize he is charged with direct current. Spend five minutes and you find out that same electricity is now running through you. This man is a powerhouse. Manager of the Fairfield Arts and Convention Center (FACC), Rustin has tackled just about every job that’s come up, from setting up tables and chairs for a wedding reception to sweeping floors and changing light bulbs.

His staff is similarly charged up. When it comes to providing small-town service for a big-city experience, they work together like a shining, well-oiled machine. Rustin readily credits his staff for the great successes of the center, as he also credits the founding Board of Directors as well as the current 100-percent volunteer board.

But ask anyone if there is one person who embodies the spirit of the FACC, who took the baton and the upbeat resolve from the founders and carried it forward, they will say, “Rustin Lippincott.”

In early 2007, Rustin had been hired as Executive Director of the Fairfield Convention and Visitors Bureau, which had its office in the new Fairfield Arts and Convention Center. The FACC Board of Directors could not help but notice Rustin’s enthusiastic energy, and invited him to join the board to help provide oversight to the fledgling operation.

Then, in September 2008, the FACC board made a major strategic decision to change the center’s management. Twenty full-time staff were let go, as revenues had slipped far short of expenses and the budget could not bear the load.

In place of local management, the board hired the Ames-based management company VenuWorks, whose subsequent financial analysis showed the FACC was undercapitalized, with revenues from donations, ticket sales, and room rentals not supporting existing programming.
VenuWorks recognized the financial difficulties but differed with the Board on how to turn it around. The Board wanted the management and staff to generate revenues by creating a plan to strengthen community support and involvement while inspiring financial support.

After four months, the board and VenuWorks parted ways. With the financial picture so dire, however, there was no money to hire a full-time director.
Partnership with the CVB

But there was Rustin and the potential strategic partnership with the Convention and Visitors Bureau. “I couldn’t just stand on the sidelines and watch this magnificent creation go down,” Rustin said. Knowing how much pride the community felt in the new building, Rustin was maximally motivated for action. “What would the community be like if one of the major artistic pillars was dark—if this place fell through?” he wondered to himself.

In early February 2009, founder Suzan Kessel huddled with the Fairfield CVB board with a request from the FACC board to share Rustin’s time. She asked to have him installed as the interim director of the center, while continuing his CVB work.

Fortunately for all, the proposal was accepted. On his first day, February 5, 2009, Rustin was charged to streamline staff and keep the center doors open.

Kind Help from a Colleague

Rustin was truly a serendipitous choice for FACC Executive Director. As a student at the University of Northern Iowa more than a decade earlier, he had forged a strong friendship with Steve Carignan, Director of the Gallagher Bluedorn Performing Arts Center. Now he called his friend and laid out his plight.

“I put this in his lap and said, ‘I’m not going to fail,’ ” Rustin recounted. Steve responded quickly and unequivocally: “Rustin,” he said, “I’m on it!”

Immediately, Steve authorized a $15,000 donation from Gallagher-Bluedorn to the new Fairfield Arts & Convention Center. Then he assembled his managers—department heads for technical, marketing, development, programming, and ticket office—and brought them to Fairfield for several intensive training sessions with Rustin and staff.

For the fall 2009 season, they put together nine performances, advertised in a glossy brochure, rallied sponsors, and engaged media partners to get behind the flagship series. They got a good ticketing company and began finding the right niche in the national field of performing arts and shows.

One of the managers Steve brought down was Lindsay Haskins, the Director of Development. For Rustin and Lindsay, it was a life-changing meeting. They started dating, got engaged in September 2009, and married in August 2010.

The Shows Must Go On!

With season one taken care of, Rustin tackled his next mission. He wanted to feature the many local performing artists and give them the opportunity to be stars on the Sondheim Stage. With that ball rolling, his next mission was to increase the meetings, special events, and weddings held at the center.

To help generate new ideas, he pulled together a marketing committee that forged relationships and built momentum. Many people stepped up to the plate to increase public awareness of events and space rental opportunities, led by then-board president Bob Moore.

In another watershed moment, a group of top community leaders, including Mayor Ed Malloy, board members, and bank representatives, put together a proposal to transfer ownership of the FACC to the city. This involved raising an additional $400,000 and yet again, donors responded with generosity.

What was now required was a public referendum from city voters to approve the purchase of the center. Bob Moore and Rustin, along with board members Mark Cohen, Pat McMahon, Suzan Kessel, and others, took the initiative to explain to the public why this was the right path for the center, for increasing community involvement and eliminating the debt. The group also explained the ongoing efforts to maximize revenues and control expenses.

In yet another resounding demonstration of support, the citizens of Fairfield voted 2 to 1 to allocate 12.5 percent of the Fairfield Local Option Sales Tax (LOST) revenue to purchase the center and place ownership with the city. This watershed vote turned the corner for the center.

As a result of the strong relationships Rustin has developed with theatrical agents throughout the country, Fairfield is on the map. They know that Rustin made 2011-12 a whopping 27-show season. 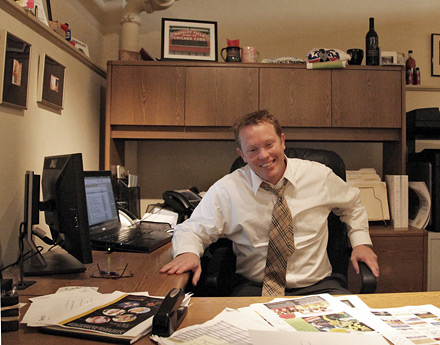 Executive director Rustin Lippincott stays calm and centered amid the whirlwind of activity at the Fairfield Arts and Convention Center. (photo © 2012 Werner Elmker)

The center has also become known as the premier venue in Southeast Iowa for meetings, special events, and wedding receptions. The staff have welcomed groups from across the state, utilizing all spaces of the facility and featuring the center’s catering partners.

In 2011, 50,000 people attended 867 separate events, coordinated by a full-time staff of six and a part-time staff of nine. Nearly 200 volunteers worked as ushers, greeters, ticket takers, concession stand support, and administrative assistants. And a new training program equips volunteers with the tools they need to continue this indispensable support.

Behind the scenes is the all-important FACC Board of Directors, led by chairman Rob Steinberg, serving without pay, to provide the oversight and experience necessary to run the center in the new millennium. Rob has brought new ideas to the board with a keen eye towards performance improvement.

The FACC will always have a need for community support for its programs and events in the form of financial contributions from both businesses and individuals. As Rustin explained, “Reasonable, affordable ticket prices for Broadway-quality and other diverse performances—and room rental fees at competitive rates in a beautiful facility—are possible because of the generosity of our donors.”

He continued, “All this has come about due to the enthusiasm, optimism, creativity, and persistence of the founding board members all the way through the current board. Our hats are ever off to these amazing people, who worked together and made it happen and continue to provide their insight. All of us working and volunteering here humbly serve in their footsteps and are committed to making the brilliance of their legacy shine on and on.”

"Wedding Band": Music to Get Married By | Wedding Band Charts the Pathetic Path of Aging Rockers