Wedding Band follows four friends who escape their boring day jobs by playing some of the wildest weddings in town. (photo: Darren Michaels)

Wedding Band (Saturday, 9 p.m., TBS) is a wonderful new comedy series that combines Spinal Tap and School of Rock in a satire of the wedding-band biz. The band in question is made up of four aging musicians with day jobs and, in one case, a family, but the wedding circuit allows them to keep their rock ‘n’ roll dreams alive. Their goal is to “make sure everybody has a good time,” which basically means playing “I Will Survive” at every gig – even country-western style, if need be. Still, the guitarist (Peter Cambor) gets to do scissor kicks, the drummer (Derek Miller) twirls the sticks to his heart’s content, and the lead singer (Brian Austin Green) has his pick of bridesmaids. Wedding Band finds laughs in the gap between their swagger and the sad reality of their place in the musical food chain. 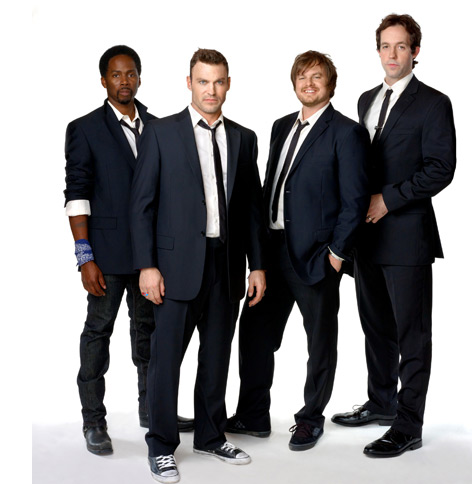 Aside from a few dumb breast-job jokes, the sitcom is as sophisticated as The Mindy Project, Parks and Recreation and other single-camera gems. Green’s character is an appealing con man with Jack Black bluster, and Miller shines as a barely civilized drummer à la Keith Moon (though it’s hard to imagine Moon playing in a yarmulke at a bar mitzvah party).

If the goal is to make sure everybody has a good time, then Wedding Band has accomplished its mission.

I admit to feeling grumpy about watching a Christmas movie before the Halloween pumpkin has even rotted on my front porch. A harried couple (Caroline Rhea, Barclay Hope) reluctantly hire a “Christmas consultant” named Owen (David Hasselhoff) to keep their holiday from descending into chaos. Dressed in a red-and-green bowtie, Owen is the personification of crazed Christmas cheer, marching the skeptical family through drills of shopping, caroling and decorating. Ultimately they can’t resist his over-the-top commitment to holiday happiness. 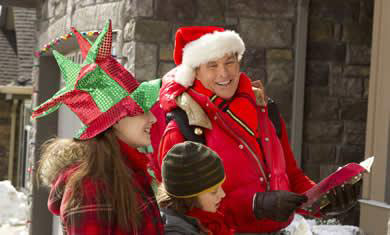 David Hasselhoff in The Christmas Consultant.

This is kind of embarrassing for a cynical TV critic (around this time of year I answer to “Grinch”), but ultimately I couldn’t resist Hasseslhoff’s over-the-top commitment to his role. As we know, the Baywatch mastermind has no fear of looking like an idiot, and as a result he’s willing to give the sort of shamelessly hammy performance that puts over the material.

I wouldn’t mind seeking Owen’s advice on how to survive the much drearier holiday programming that’s sure to come during the next month and a half.

A better title for this reality series would be Finding Something That Might Possibly Be Bigfoot, But Probably Isn’t. The four-member Bigfoot Research Team races across the country at the merest hint of a sighting – for example, high school kids catching a distant “apelike” figure in the woods on their camcorder. The team members, God bless them, are the only ones who don’t entertain the possibility that the kids are pranking them to get on TV. Instead, they throw themselves into a full-blown investigation, tramping through the woods to check out the “very compelling evidence.”

When evidence fails to add up, our guys aren’t inclined to conclude that Bigfoot wasn’t in the area. They tend to conclude that he was, but just acted in a way that no other bipedal primate would. As one of them says during an investigation, “This Sasquatch ain’t a rocket scientist.”

Frontier Earth
Tuesday, 7 pm (Animal Planet)
This new nature series chases after some of the world’s most elusive animals, allowing us rare glimpses via stunning cinematography. 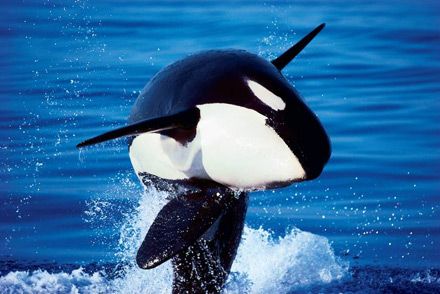 In the premiere, we head to New Zealand for an up-close encounter with the region’s dwindling killer-whale population. Our guide is Ingrid Visser, a passionate marine biologist who dares to swim with the massive, flesh-eating predators without benefit of a shark cage. You fear for Visser’s life when you get a good look at the whales’ sharp teeth, but she doesn’t seem concerned. In fact, she treats her subjects like pets, giving them names like Pirate and Funky Monkey. She gets to know each one personally and cares for them as if they were so many cute puppies. It’s surprisingly endearing.

Now I want my own killer whale!

Mankind: The Story of All of Us
Tuesday, 8 pm (History)
This series takes us on a wild ride through human history. That’s right— the whole shebang in a mere 12 hours, beginning with prehistoric hunters in the East African grasslands. Amazingly, Mankind pulls off this epic feat without seeming too shallow, thanks to brilliant graphics and testimony from a wide range of experts.

Historical reenactments can be cheesy, but they’re skillfully deployed in the first two-hour episode. A multitude of stringy-haired extras play half-naked ancients, from cavemen in loincloths to bare-chested Egyptian charioteers. The director must have had a ball staging the elaborate scenes in Ice Age caves and Middle Eastern battlefields.

Call me narcissistic, but I think it’s gratifying to see humanity’s greatest hits fly by: discovering fire, crafting tools, inventing farming. I can’t help feeling proud of our achievements, even with our ancestors’ tendency to under-dress.

FACC Part VI: The Shows Must Go On | Manager Rustin Lippincott & the Board Bring Success to Fairfield's "Magnificent Creation"

How to Make a Gingerbread House: Tips, Tools, and Recipes for a Candy Masterpiece