I have no interest in watching dogs bond with members of other species. At least, that’s what I thought before I saw Unlikely Animal Friends (Friday, 7 p.m., National Geographic). Maybe my defenses are down because it’s Thanksgiving weekend, but I laughed and cried at the amazing true stories recounted in the first episode of this four-part series. 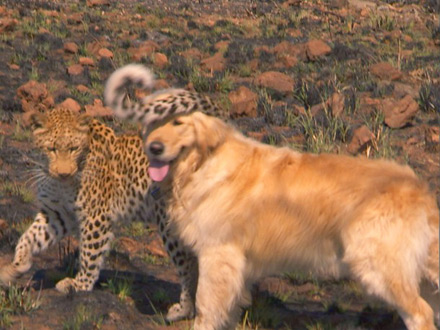 Salati, a 14-month old leopard, plays in a field with her golden retriever friend Tommy on Unlikely Animal Friends. The Brooker family, professional animal wranglers near Pretoria, South Africa, adopted Salati after learning she was the sole survivor in a captive-born litter. She and the family dog Tommy are best of friends. ( Photograph by National Geographic Channel)

A golden lab in Ireland swims with his best friend, a dolphin; a Great Dane in British Columbia raises an abandoned doe; and a mutt in Wyoming plays complex games with a donkey four times his size. Cesar (The Dog Whisperer) Millan chimes in with psychological insights about these unique relationships: “The dog is showing us that the best we can do is not change anybody’s nature, just honor who they are.” 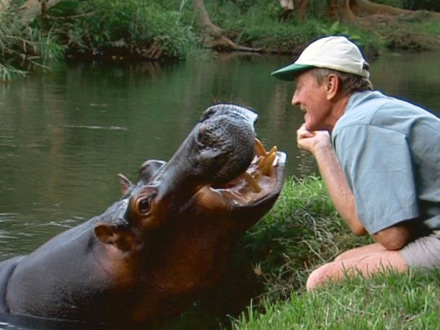 Jessica the hippopatumus makes daily visits to the home of a South African couple. ( Photograph by National Geographic Channel)

Well, that seems like a stretch. But on Thanksgiving weekend, I’m going to let it go. 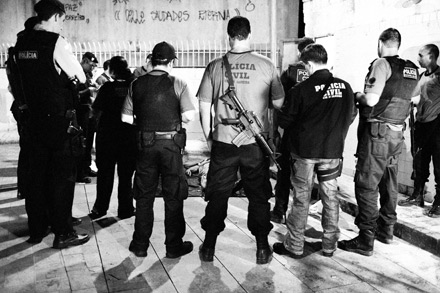 A scene from the "Rio" episode of Witness. (Eros Hoagland/ HBO)

“Rio” is the last episode in the documentary series Witness (Monday, 8 p.m., HBO), which follows war photographers into hotspots around the globe. Rio de Janeiro’s conflict is internal: police vs. drug gangs in the Brazilian city’s 900 slums. Photographer Eros Hoagland ventures into dangerous neighborhoods to find the real story, despite the fact that journalists tend to turn up dead in a horrific manner of execution known as “The Microwave.” Hoagland discovers that corrupt police officers and politicians are as bad as the drug traffickers, and the seemingly hopeless situation leads to a moment of existential despair.

“I just find more and more as the years go by that I have trouble lying to people and telling them that my work is going to help their situation,” he says, “because it doesn’t really change anything.”

That’s a depressing final statement for this series, and I don’t want to believe it. Maybe a photograph isn’t going to make the citizens of a troubled city lay down their arms, but telling the truth about a conflict remains a noble thing to do. At least it’s a start, right?

This pernicious singing competition subjects contestants to all manner of torture during their performances. The studio audience guffaws as they are made to walk through cactuses, step on snakes and alligators, get electric shocks, and survive blows to the head, all while warbling/screaming the likes of “Girls Just Want to Have Fun.” Host Steve-O slurs his way through his lines but seems just conscious enough to enjoy the sadistic spectacle.

Killer Karaoke marks a new low in pop culture – and while I’m repulsed, I’m also reassured in a strange way. Yes, the series sets out to degrade people, but at least it isn’t living up to its name and killing them. (Yet.) 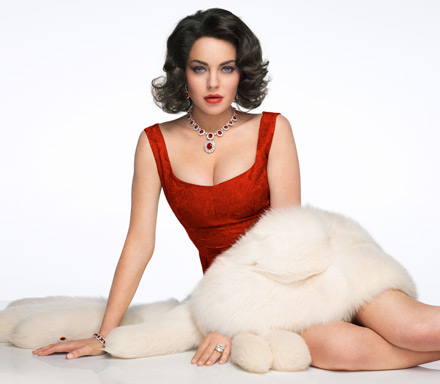 A scene from the "Rio" episode of Witness. (Eros Hoagland/ HBO)

Made in Chelsea
Monday, 7 pm (Style)

I’ve always idolized the English, who seem so much more sophisticated than we are. So I was in a state of ecstasy during the opening credits of this new reality series, whose posh narrator promises “an exclusive world of royals, aristocrats and playboys” in London’s Chelsea neighborhood. “In Chelsea,” the narrator confides, “the truth is more fabulous than fiction!”

I couldn’t wait to see a reality series where the people are witty and eloquent, as opposed to our own banal reality stars. Imagine my surprise, then, when these young, pretty things made the Real Housewives look like geniuses. What a waste of high-class accents! They natter on about how hung over they are, and about who likes whom. One of them even thinks Charles Dickens wrote Winnie-the-Pooh.

Turns out that just about anything is preferable to hanging out with these idiots. Even reading Charles Dickens’ Winnie-the-Pooh.

The returning cop series is easy to watch, with its low-key investigations and amiable banter between detective Rizzoli (Angie Harmon) and medical examiner Isles (Sasha Alexander). I’ve come to like it despite its shamelessness.

The shameless part is asking us to believe that Harmon is – according to the publicity material – “a tough-as-nails Boston police detective.” Harmon plays the comedy too broadly to register as tough. Then there’s the fact that she looks like a supermodel on a photo shoot. This week’s episode finds a pretext for getting her out of her stylish clothes, right in police headquarters.

Harmon’s stunning mane, with its dark, complicated curls, deservers a show of its own – though probably not a cop show.