A week after her Hurricane Sandy ordeal in NYC, Gisella was back in her element teaching cooking classes and giving demonstrations in Fairfield, Iowa. (photo by Juliet Jarmosco, jarphoto.com

The following letter was written by Leisa Aras, who did not know Steve Boss, Ben Schultz, or Gisella Isidori but immediately jumped into action when she heard a 78-year-old woman had been missing in NYC for over a week.

On November 4th, 2012, Derek Lee took a call in our real estate office from a man in Connecticut, Dr. Ben Schultz, who received a call from his good friend in Iowa, KRUU radio host Steven Boss. Steve was distressed that he could not find his friend Gisella Isidori, who was in Manhattan staying in a friend’s apartment. She was, he hoped, on the 30th floor of a building on Wall Street and no one had heard from her since Monday, October 29th, the day Hurricane Sandy hit the East Coast and caused widespread power outages. Gisella, who is 78 years old, was visiting from Italy.

Derek texted me to see if I was still downtown. I was close by, so we met up and went to her Wall Street address—there was never a question about going to check up on Gisella. Derek didn’t even give it a second thought when he took the call and I never questioned him when he called me. Of course we were going to help.

We knocked on the door and a little voice called out. Phew! Even better, she was, as far as we knew, okay. We introduced ourselves; she was relieved but of course a little cautious of these strangers at her door. We explained that Steve had called Ben, who called us to check on her. To put Gisella’s mind at ease we called Ben so he could speak to her too. She was so amazingly relieved.

It took a good 15 minutes to figure out what had happened, what we needed to do, and what Gisella needed. We knew one thing. We were not leaving without her. Where she would go after she was down from the 30th floor would be figured out later.

We had a larger logistical issue to figure out first: How do we get a 78-year-old woman with high blood pressure and a bum knee down 30 flights of stairs, with her luggage? Flashes of “there was an Australian (me), a China man (Derek), and an Italian (Gisella) in a bar” started playing through my head. I was envisioning us taking turns piggy-backing the Italian down the stairs … scratch that. A kitchen chair . . . we carry her down on the kitchen chair? Works in the movies . . . hmmmm, possible, very possible. Oh wait, the luggage, she won’t leave with out the luggage. Sheets tied together and hammock-style down? Same issue.  We called Brett Comeaux, another colleague of ours and a ripped 27-year-old, P90X-obsessed North Carolina transplant. He was uptown but never questioned—he just jumped on the train and headed down. Okay, three of us could figure this out. We had 20 minutes before Brett would arrive. Gisella could pack her things and we could rest a little waiting for back-up.

Oh, light bulb moment—I was married to a firefighter. If they can fight fires and get cats out of trees, then they could get a 78-year-old Italian down 30 flights of stairs. Minor issue—no one was unconscious or in danger at this point. This is considered urgent, but not a life-threatening emergency.  311 was called, situation explained, and explained again, and then we were patched through to 911. Okay! Logistical issue resolved!

The wonderful FDNY EMT’s arrived. Even though it was not this at this time a life-threatening situation, they took her vitals; they kept her calm and called for some firemen to help carry her down. Four more hunky FDNY men arrived! And two NYPD officers also. What an amazing blessing!

As the story unfolded, Gisella had been without food, water, heat, and power for 8 days. She had no way to call downstairs for help or any way to contact her family in Italy to let them know she was okay. Her phone’s battery had been dead since the third day and we were now on day 7. When the paramedics asked her when she had last eaten, she said Monday, except a pear, an apple, half a yellow bell pepper, and some pinot Grigio. She had had 1 gallon of water and 2 smaller bottles of water, and it was almost gone.

Just as we were about to start heading out, our awesome colleague Brett Comeaux burst through the doors onto the 30th floor. Without even being able to catch his breath, he was quickly given Gisella’s luggage (a good 60 pounds) by the smart NYPD officer who knew that a 27-year-old buff P90X-obsessed kid could handle it . . . and he did. No questions asked, he just turned around and started heading back down, luggage in tow.

Two hours after we had received the call from Ben, Gisella was carried chariot-style (see, I knew it was a cool idea!!!) down 30 floors by several of FDNY and NYPD finest. They took turns, two at a time, two flights each, carrying her down. It took about 30 minutes with only flashlights and some serious muscle work, some humor, and a lot of strangers pulling together, because that is what is done in NYC. 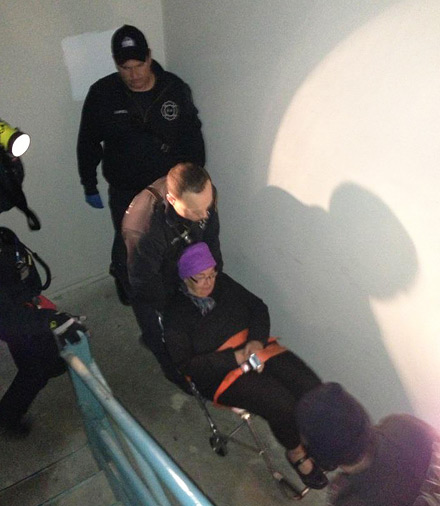 After eight days stuck on the 30th floor, Gisella gets the royal treatment as NY firefighters and police officers take turns carrying her down the stairs.

At one point Gisella wanted the guys to take a rest. “I could walk a little,” she said. We told her to enjoy the ride. “After all, Gisella,” I said, “how often in your life do you get a bunch of hunky men in uniform carrying you around?” Everyone laughed and she replied “Yes, it has been a while.” The last 20 flights were shared with a happy little 78-year-old Italian lady and her heroes. 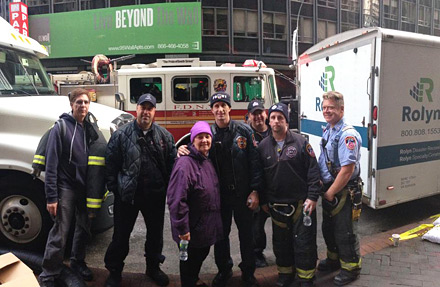 On the street at long last, Gisella posed with her awesome rescuers.

When we all reached the bottom, Gisella was so relieved and overcome to tears that 10 perfect strangers, a dear family friend, and his friend would come to help her. That one phone call from Iowa via Connecticut to a Google real estate ad and the chance that she was actually in the building and okay had her finally back on the ground and safe.

Next, I happily welcomed her into our home. I am an ex-pat Aussie and know the importance of being surrounded by people after a traumatic event—especially without friends and family close by. The marathon runners had descended on the city and hotel rooms were scarce, if not available at all. Top all of that off with thousands of displaced New Yorkers because of Hurricane Sandy . . . well, it was never a question. She was coming home with me and that was it! Of course, Gisella insisted on making us authentic Italian dinners. My kitchen was in shock, to say the least. (All of those stories you hear about New Yorkers never using their kitchens—they are true.) And my 10-year-old daughter Matisse did not leave her side. She is our new honorary Italian Grandma.

She enjoyed a nice long hot bath. Also some hot coffee, hot food, Internet access to contact her family in Italy and friends all over the USA and catch up on all the news. She happily commandeered my kitchen and my daughter . . . and the house smelled amazing!

Thursday, Gisella boarded an AMTRAK train, heading to her dear friend Steve in Iowa. We are so blessed and so glad we have met Gisella. She has not stopped talking about Derek, Brett, Steve, Ben, and her 8 first responders. When it counts, people are in the right place at the right time. When it counts, strangers are put together. When it counts, lives are changed forever.

I wanted to thank Steve, Ben, Derek, and Brett for being there that day. Derek for calling me in on this—I met the coolest chick on the planet, have a cool new radio station in Iowa to listen to, a dentist in CT if I break a tooth in that state, and an open invite to Italy.  SWEET! Thank you all.

Gisella made it safely to Fairfield, IA, after her NYC adventure. See Gisella’s Global Kitchen.