Samantha Fish will perform in Fairfield on January 4th, 2013.

It wasn’t all that long ago that the Bonzo Dog Band could croon, “Can blue men sing the whites?” and have everyone understand that the British comedy combo were parodying white middle-class Englishmen like the Rolling Stones and Eric Clapton, who became famous singing black American blues music. The question of authenticity was in the air. How could a teenage wanker from London really understand the downtrodden ways of Muddy Waters or Howlin’ Wolf?

Times have changed, and no one thinks twice anymore about whether a musician can be white and perform the blues. Many people believe the late great Stevie Ray Vaughn sealed the deal. But what about women? Sure, there are the famous blues singers of the past, like Bessie Smith and Janis Joplin, but most music enthusiasts are unfamiliar with pianist Marcia Ball or guitarist Susan Tedeschi.

Which makes you wonder why a 22-year-old woman from Kansas City would want to play the blues. Samantha Fish has a simple answer: “Everyone can understand it and feel it.” She notes that the old stereotypes about the music have faded. “If you look at the blues scene as a whole, there is a lot of diversity. Nowadays, more and more young people are coming in with their own interpretations of the blues. It has survived so long because the blues is relatable and honest.” But she says this does not make blues music a static thing that everyone does the same way.

Fish will be performing in Iowa at least three times during January, including January 4 at the Arts & Convention Center in Fairfield, January 5 at the Redstone Room in Davenport, and January 13 at the Gas Light in Des Moines. She’s performed in Iowa before and knows that like the rest of the Midwest, it is a good stomping ground for her music.

“The Midwest is where the blues took form,” Fish says. “Kansas City is famous for being one of the big towns for jazz and blues—jump blues in particular. It’s also where the idea of the ‘jam’ came from. I discovered the blues through my hometown. I’m sure it happens for a lot of people that way. I started playing music, and the only way to get out and jam with others was to learn some blues standards. I’m glad I did, because I discovered the passion and soul that is the blues. I think the tradition really carries on like that.” 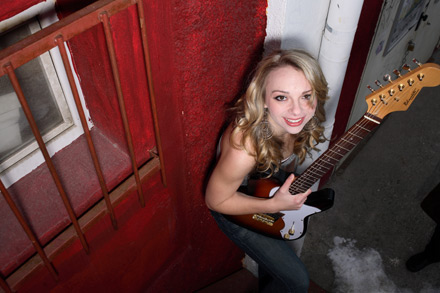 The blues has also discovered Fish, in a good way. She was this year’s 2012 Blues Music Award winner for Best New Artist Debut for her album, Runaway. The disc gets airplay on blues radio stations around the country and the globe. She’s played the European blues festivals circuit and this October embarked on the Legendary Rhythm & Blues Cruise. Her latest tour, of which her Iowa gigs are just one small part, take her as far away as Florida, Maine, Texas, and Alberta, Canada, and just about any place in North America where they love the blues.

Besides being known for playing a kickass electric guitar and singing raw-throated “blooz” while looking like a high school cheerleader, Fish has garnered much praise for her songwriting skills. “My inspiration for my songs generally comes from experiences in my life and the experiences of others. I focus on the story.” Tracks such as “Down in the Swamp” and “Money to Burn” reveal that she has a wild imagination that uses well-observed detail to make her lyrics convincingly real.

And then there is the slow, smoky jazz of “Feelin’ Alright” (not to be confused with the old Traffic tune), which, as Fish notes, is a drinking song. She admits that she prefers coffee to beer or whiskey, but there are times she needs the taste of something strong. In her case, that means BBQ! She seriously loves BBQ, but what else would one expect from a Kansas City denizen?

While winning the BMA New Artist award and touring extensively at such a young age suggests Fish may not have paid her dues, she begs to differ. “When I was 19, Frank Hicks, owner of Knuckleheads Saloon and dear friend—I wouldn’t have done this for anyone—asked me to do a Hannah Montana Show. . . I spent an entire weekend working on nothing but Hannah Montana songs. Long story short, those little kids ate me alive. I am not as good at performing Hannah Montana songs as she is.”

Fish laughs about it now, but she admits even Hannah Montana may be an influence. “I know I’m not a traditional blues artist. I dabble into rock and sometimes even country, Americana, and singer-songwriter territory. My music is bluesy and that is the constant. I’m really just playing what comes naturally to me. Growing up with heavy doses of rock ’n’ roll, that can come out. I am a product of my influences and inspirations. It’s not a matter of choosing any genre over another. I just write and play, and that’s it.”

The question of whether she’s authentic or whether a 22-year-old white girl can play the blues doesn’t matter. What counts is that she does and is true to herself. That’s what the blues have always been about.