﻿MARTIN FREEMAN as the Hobbit Bilbo Baggins in the fantasy adventure THE HOBBIT: AN UNEXPECTED JOURNEY, a production of New Line Cinema and Metro-Goldwyn-Mayer Pictures (MGM), released by Warner Bros. Pictures and MGM. (Photo by Mark Pokorny)

Your experience watching this film may be improved if you remember two simple words: cash grab. If you boil it all down, this is what the first entry in director Peter Jackson’s latest Middle Earth trilogy amounts to. Largely a soulless, lazy piece of filmmaking, this film is all flash and little heart. It fails to connect with the viewer in myriad ways where the Lord of the Rings trilogy succeeded, and becomes an exercise in Jackson’s hubris getting the better of him as he makes one mistake after another with this misguided creation. 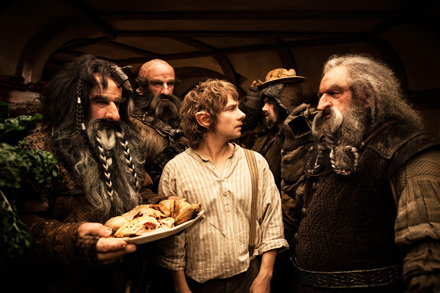 ﻿﻿WILLIAM KIRCHER as Bifur, GRAHAM McTAVISH as Dwalin, MARTIN FREEMAN as Bilbo Baggins, JAMES NESBITT as Bofur and JOHN CALLEN as Oin in THE HOBBIT: AN UNEXPECTED JOURNEY, a production of New Line Cinema and Metro-Goldwyn-Mayer Pictures (MGM), released by Warner Bros. Pictures and MGM. (Photo by James Fisher).

Set some sixty years before The Lord of the Rings, The Hobbit: An Unexpected Journey tells the tale of Gandalf the wizard, Bilbo Baggins the hobbit and a host of dwarves who set off to reclaim an ancient home of some of these dwarves, which was long ago destroyed and occupied by the monstrous dragon, Smaug, because of its enormous horde of gold. As happens on all such quests, there are moments of great tension and excitement, others where there is a respite from all the action, and the standard "moral of the story" admonitions from the likes of Gandalf and wise elves like Elrond. In some ways it is exactly what you would expect, and yet in some ways it feels empty because it has a lather-rinse-repeat sort of formulaity to it. 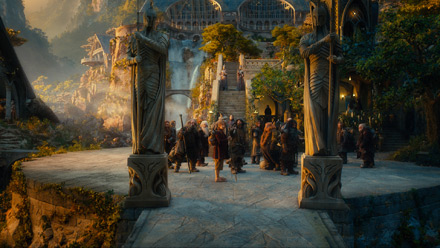 Visually, The Hobbit is on par with what Jackson gave us in the Rings trilogy, which is to say the battles are epic, the special effects are filled with appropriate amounts of pizzazz and you get lost in the wonder of the settings that many of the film’s scenes take place in. The creatures are nasty, the mines are dimly lit, the elvish kingdom of Rivendell is as majestic as ever. It is wondrous to behold and in many ways this film is indeed a feast for the eyes. 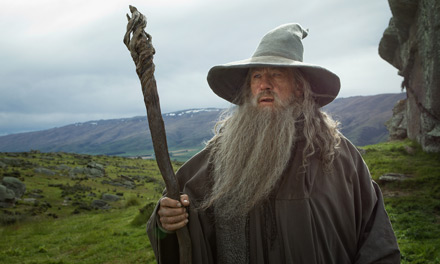 ﻿﻿﻿﻿IAN McKELLEN as Gandalf in THE HOBBIT: AN UNEXPECTED JOURNEY. (Warner Bros. Pictures).

However, this is also part of the problem, as Jackson counts on you getting sucked into the world he is creating that you will miss significant problems along the way. What problems are these? Here are a few.

Bilbo’s first encounter with the ring is exactly like Frodo’s (minus the new setting) in Rings, so the lack of imagination here is off-putting. Same goes for recycling the same joke about Gandalf walking into Bilbo’s chandelier because he is so tall and (apparently) is a bumbling old fool.

﻿﻿﻿﻿The trolls William, Tom, and Bert in The Hobbit. (Warner Bros. Pictures).

Also, after so much is made of hobbits’ legendary eating habits in the Rings trilogy there is not one mention of such things here. Also, the novel speaks many times to Bilbo’s homesickness, while next to nothing is done about it in the film (other than one of the dwarves mysteriously pointing this out at one point despite Bilbo having made no mention of homesickness since one moment mere minutes into the journey). 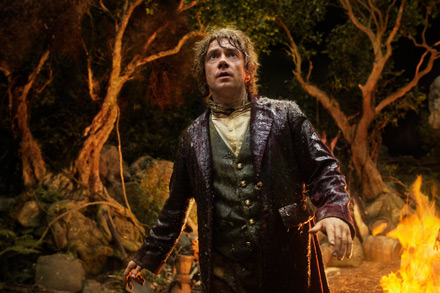 These may seem like little things, but when you consider how much they help frame Bilbo’s character, life and frame of reference, the fact that they are done so haphazardly in the film is disturbing. By the time you get to the end of the film, apart from a couple of stoic lines near the end, you genuinely don’t get much of a sense of what Bilbo’s purpose on this journey really is, or what’s at stake for him, whereas you get more of a sense about these things in the story. 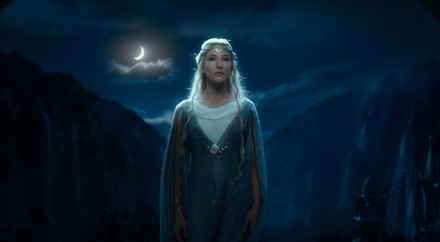 Further complicating matters is Jackson’s decision to bring in a host of Rings actors to make guest appearances in this film when they serve no purpose other than to assuage skeptical Rings aficionados that this is all somehow related. Bringing the likes of Lady Galadriel, Saruman and Frodo into the story does little more than suggest to the viewer that Jackson doesn’t trust his audience – and this is a shame. He is all but admitting that the source material is not enough (at least for him), and so he has to go and bring in these folks to add credence to his version of how he thinks this story should look.

The J.R.R. Tolkien novel on which this story is based (loosely) is short enough that one film should have sufficed. When it was announced that the story was being made into two films, I rolled my eyes a little at yet another story being split in half so film companies could make more money, but understood. It wasn’t a completely outlandish idea, especially after Jackson told people that he would be inserting material from unpublished notes of Tolkien’s into the story, so I guardedly went along with it.

﻿﻿﻿The White Council Chamber in a scene from THE HOBBIT: AN UNEXPECTED JOURNEY. (Photo courtesy of Warner Bros. Pictures).

However, making this into a trilogy, even with whatever additions Tolkien’s notes and Jackson’s fabrications (of which there will be some considerable ones in the coming films) is already proving to be too much for this series to handle. It is hard not to watch this film and see a bit of Star Wars: Episode 1 – The Phantom Menace in here (the inclusion of Radagast the Brown as the fifth remaining wizard in Middle Earth effectively serves as this series’ Jar Jar Binks) and think that the rest of this trilogy is already in serious trouble. C