This week on "The Abolitionists," the battle between pro-slavery and free-soil contingents rises to fever pitch. During his raid on Harpers Ferry, John Brown (above) is captured and executed, becoming a martyr for the cause.

If you’ve taken my advice and watched the first two installments of “The Abolitionists,” (American Experience, Tuesday, 8 pm, PBS) I know you will be dying to see the documentary’s thrilling finale. Will William Lloyd Garrison, Harriet Beecher Stowe, et al, convince the U.S. to peacefully free millions of slaves, or will it take, in Frederick Douglass’s words, “iron, lead and fire”?

Cue Civil War. Even Garrison, so committed to pacifism, finally realized that blood had to be shed before slaveholders would give up their property. As a reward for those who watch the whole series, the documentary ends with an unforgettable scene from 1865: newly freed slaves hoisting Garrison onto their shoulders to thank him for his 35-year campaign on their behalf. I doubt any other program on tonight’s schedule will top that image. 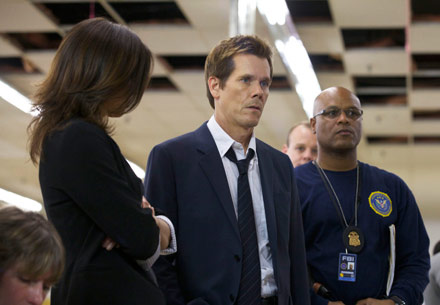 Former FBI agent Ryan Hardy (Kevin Bacon, center) is brought in to help track down Joe Carroll and his cult of followers in the new drama THE FOLLOWING, premiering Jan. 2 on Fox. (©2013 Fox Broadcasting Co.)

I’ve always argued that a Kevin Bacon performance is never without merit, no matter the production. But I’ve finally lost the argument with the premiere of The Following (Monday, 8 p.m., Fox), a horror series from Kevin Williamson of Scream fame. It’s written so badly that even Bacon bombs as a detective with a permanent Joe Friday scowl.

Williamson strained his brain to come up with the most brilliantly sick scenario ever seen on TV. He’s achieved “sick,” all right, but not “brilliant.” Even with one gruesome scene after another, it’s hard not to laugh at the idea of a diabolical English professor on an ornate killing spree inspired by Edgar Allan Poe works like “The Raven.” Would you believe that this evildoer can command his legion of cult followers to tattoo Poe quotations on their bodies and stab themselves in the eye? Or that Bacon’s character sleeps with the psychokiller’s wife while trying to crack the case? Didn’t think so.

Will Kevin Williamson still be a Hollywood player after The Following flops? Quoth the raven: Nevermore. 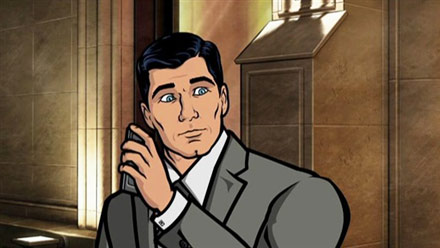 A whole generation of people were raised on earnest cartoons like Jonny Quest and Super Friends, featuring crudely drawn heroes with square jaws, no inner life and a clear-cut sense of good and evil. For them (okay, us), Archer is the cartoon series to enjoy in adulthood. The crudely drawn spy hero has the squarest of jaws, but his pursuit of the bad guys is freighted with adult baggage. Despite his rugged physique and manly voice, Archer has all sorts of human foibles. And despite the cartoon’s innocently retro look and score, it’s loaded with sex, drugs, profanity and violence. Oh, and most important of all: irony.

At the start of season four, Archer (voice of H. Jon Benjamin) is plagued by amnesia. How to cure him? “This isn’t The Flintstones,” says the resident scientist at spy headquarters. “We can’t just wang him over the head with a frying pan!”

This reality series pits nerd against nerd: videogame experts, comic book lovers, science geeks, heavy-metal enthusiasts and others likely to begin speaking Orc at the drop of a hat. They’re eliminated in geeky competitions until the ultimate nerd is left standing. In the words of one contestant: “You can cut the tension with a light saber!”

You might expect King of the Nerds to condescend to these stringy-haired, socially challenged folks, but it actually sets out to valorize them. True, there’s irony aplenty in putting the nerds on a pedestal, but it’s all done good-naturedly. I proclaim the series a success – and believe me, as a TV blurb writer, I know a little something about nerds.

This TV movie effectively recaps the controversial 2011 trial of Casey Anthony, who was accused of killing her two-year-old daughter. It tells the story from the prosecutors’ point of view, arguing that Anthony committed the crime and lied shamelessly about it. Rob Lowe communicates the state attorney’s righteous anger at a mother who would do such a thing.

There’s only one problem: The jury found Anthony not guilty, based on the lack of hard evidence and a credible motive. Prosecuting Casey Anthony essentially retries the case and pronounces Anthony a murderer, reasonable doubt be damned. Lifetime did the same thing to Drew Peterson in a 2011 TV movie (also starring Lowe), convicting him even before his trial had taken place.

In today’s America, we’re all innocent until proven guilty on basic cable.

Silver Linings Playbook | Rebuilding a Life When Everything Goes Awry