If you take nothing else away from this review, know this: Silver Linings Playbook is absolutely riveting. Writer-director David O. Russell’s adaptation of Matthew Quick’s 2008 novel is a dizzying, heartbreaking trip through one man’s struggle to pick up the pieces of his life following a breakdown. You will not be able to take your eyes off the screen while watching this film.

After Pat Solatano’s wife cheats on him with one of their fellow school teachers, Pat (Bradley Cooper) beats the man senseless and then plea bargains his way into a mental institution. Upon his release, Pat tries to get his wife and his old job back, insisting that he’s fine, all while ignoring the odd looks people give him. Everyone is uncomfortable around Pat, despite his efforts to turn a corner with his life and look for life’s silver linings.

Pat’s possible saving grace comes in the form of wild child Tiffany (Jennifer Lawrence). A grieving widow with no filter, she has alienated people since her cop husband was killed, and gotten herself fired from her job by sleeping with everybody at the station. She’s aggressive, foul-mouthed, and beyond uninhibited, and when Tiffany is introduced to Pat, bizarre sparks fly. Pat insists he wants to get his wife back and get his life on track, so he dodges her advances. 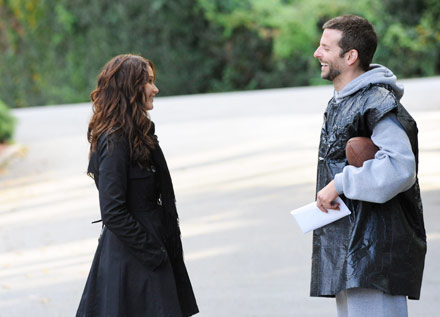 Jennifer Lawrence as Tiffany, with Bradley Cooper as Pat, in Silver Linings Playbook. (© The Weinstein Company, all rights reserved)

Despite wanting to reclaim his old life, Pat can’t figure out how to move forward. He doesn’t know how to relate to his superstitious, Philadelphia Eagles-obsessed father; his older brother—the star of the family—makes him feel inadequate; and between being ambushed by Tiffany on his morning runs and haunted by his wedding song wherever he goes (even if it’s only in his head), he is a mess of emotions he doesn’t know how to deal with.

With Silver Linings Playbook, Bradley Cooper has finally given a career-defining performance. He imbues Pat with a potent mix of rage, confusion, self-delusion, distance-keeping humor, bitterness, and hopeless idealism. Jennifer Lawrence gives a tour-de-force performance as Tiffany, and the raw way in which she comports herself regardless of what anyone thinks is a sight to behold.

Chris Tucker’s first role in almost five years is simultaneously humorous and touching as he does his best to inject life into Pat’s future by encouraging his time with Tiffany rather than discouraging it like everyone else does. And Robert De Niro gives one of his best turns in years as Pat’s emotionally unstable and uncertain father who has never known how to be the father Pat needed him to be.

At its heart, Silver Linings Playbook is about broken people trying to find their way through life and looking for the positives wherever they can find them. The dilemmas these characters face are difficult, and the self-destructive routes they take are hard to watch, but you root for them to get it right. They never stop giving up, and as a result, we don’t give up on them either.  A-