In the Civil Rights Movement, the act of singing freedom songs together was not just about singing—it was a potent means of bringing people together, inspiring them, and giving them strength in the face of violent oppression. Civil rights veteran and Iowa Freedom Choir founder Patti Miller calls the music of the civil rights movement “the glue that held everything together.”

Singing these songs together was so compelling, she says, that it was directly responsible for creating what was known as the Beloved Community. “The Beloved Community was the experience we had, black and white together, working to overcome what seemed to be insurmountable injustice,” Patti says. “In the midst of the dangerous and challenging work during those days, the power of the Community was electric and incredibly bonding.”

Now Patti wants to educate a new generation of Iowa students about the civil rights movement through her Iowa Freedom Choir project. Composed of mostly college students and a few high school students, the choir has been learning freedom songs together since last fall and will be performing on Friday, February 22, at the Sondheim Center in Fairfield. The multi-media performance will also include images and video from the civil rights movement.

The choir itself embodies exactly what Patti is trying to teach the students about. Says choir co-director Gloria Hardiman, “We have young people, old people in the choir, black, white—everyone coming together. I want people to know that this choir is out there, it is happening, you know?”

Patti was a 21-year-old music major from Drake University on July 30, 1964, when she boarded a bus from Iowa to Jackson, Mississippi, for her Freedom Summer orientation at Tougaloo College. During Freedom Summer, hundreds of mostly white college students from the north spent the summer in Mississippi registering black voters, teaching in Freedom Schools, and working in community centers. 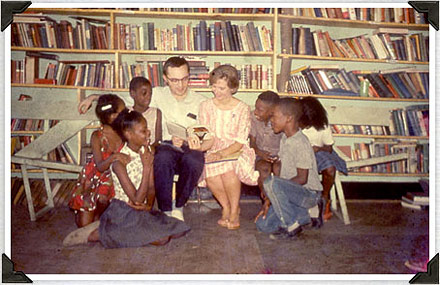 Patti Miller (center) and Marvin Gatch read to children in the Meridian Community Center in the summer of 1964.

It was a long, uncomfortable journey to Mississippi for Patti, sitting in her skirt and pantyhose per the prevailing dress code, with plenty of time to contemplate the recent disappearance of three civil rights workers in Mississippi—James Chaney and Mickey Schwerner, and Freedom Summer volunteer Andy Goodman. Patti was afraid to reveal the real reason for her trip to any of her fellow passengers.

Once she arrived, Patti was sent to work in the community center in Meridian, the same city where Chaney, Schwerner, and Goodman had been posted. In fact, the men’s bodies were found a few days after Patti’s arrival. Nevertheless, until her return to Iowa a month later, Patti immersed herself in her work.

She embarked on Freedom Summer wanting to change her country, but her experiences changed her as well. “My eyes were opened to the racism and bigotry in this country in such a way that I was drawn to understand our country’s history, having begun with slavery,” she says. “I was struck by the depths to which we disregard people of color. . . . It led me to want to now keep the history of the civil rights movement alive in order for students especially to learn from that history and become involved in moving our country forward even more.”

Given the powerful sense of community Patti felt singing freedom songs, paired  with her experience as a music teacher and speaker on the civil rights movement, it is not surprising that Patti has chosen to share the story of our country’s civil rights struggle through the creation of the Iowa Freedom Choir. Patti had both the vision and the enthusiastic students—all she needed was the right choir director. A friend of a friend put her in touch with two sisters who live in Iowa City, Mary Teague (known as Mama Teague) and Gloria Hardiman. Mary’s background is in gospel singing and Gloria toured for many years as a blues singer. In an amazing coincidence, it turned out that Patti had been Gloria’s choir teacher in Chicago in the late 1960s.

The two sisters are now lending their considerable vocal talents to the choir in addition to directing it and sharing their own experiences of the civil rights movement with the choir members.

The tenth and twelfth respectively of twelve sisters, Mama Teague and Gloria Hardiman spent their early years on a small farm in Mississippi owned by their mother and father, who was a minister active in the civil rights movement. 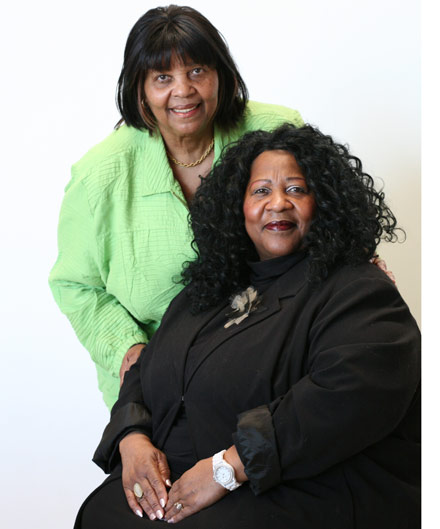 It was a dangerous time. Reverend George Lee had recently been murdered in Mississippi for urging black people to vote. And their father’s freedom work was drawing the attention of the Ku Klux Klan. Gloria, who was only five at the time, recalls the night a group of angry white men came to the house to kill her father when her father was away. Her mother threatened to shoot the men with a shotgun if they came onto the porch.

Ultimately, the family was forced to flee with the help of a sympathetic white neighbor. They chose to go to Chicago, where several of their grown daughters already lived. There the two sisters grew up singing gospel in their father’s new church. Many years passed and both sisters came to settle in Iowa, where they met Patti and formed the Freedom Choir together.

In addition to the Iowa Freedom Choir’s February 22nd concert in Fairfield, Patti hopes to give the singers a close-up look at the history of the civil rights movement by taking them on a tour of important sites in Memphis, Birmingham, and Selma, culminating in a joint concert with Meridian Community College Gospel Choir in Mississippi. Patti will be featuring the choir’s tour in her upcoming documentary, Return to Freedom Summer: Passing the Torch.

Touch: TV's Search for Truth | Touch Finds the Meaning of Life in the Number 318