If you love TV, you have to love its grand follies. These are the shows that throw caution to the wind to make REALLY IMPORTANT STATEMENTS ABOUT HUMANITY. Touch is one of those shows. Kiefer Sutherland plays the father of a mute boy who sees the connectedness of all things, somehow involving the number 318. (5227 also seems significant. Who knew?) Needless to say, an evil corporation wants to harness the boy’s powers to end life as we know it. At the start of season two (Friday, 7 p.m., Fox), Sutherland meets a woman (Maria Bello) searching for her own mystical child, who’s also in grave danger.

The two parents agree that “we cannot go to the police.” No, that would be too sensible. It would also prevent Sutherland from conking bad guys over the head, kicking in doors, and sneaking into corporate headquarters all on his own.

Touch is utterly convinced of its profundity, and that makes it irresistible for aficionados of bad TV. The child actors strive to look cosmic, and the script throws around concepts like destiny and mortal sin. The dialogue sounds less like human speech than a New Age bumper sticker: “No matter how we try to control it, nothing is as it appears to be.”

Well, with one exception. Touch appears to be as nutty as a fruitcake, and I think it really is.

Shakespeare Uncovered
Friday, 8:30 pm (PBS)
Six episodes combine history, biography, iconic performances, new analysis and the personal passion of its celebrated hosts — Ethan Hawke, Jeremy Irons, Derek Jacobi, Trevor Nunn, Joely Richardson and David Tennant — to tell the story behind the stories of Shakespeare’s greatest plays. Each episode combines interviews with actors, directors and scholars, along with visits to key locations, clips from some of the most celebrated film and television adaptations, and illustrative excerpts from the plays specially staged for the series at Shakespeare’s Globe in London. 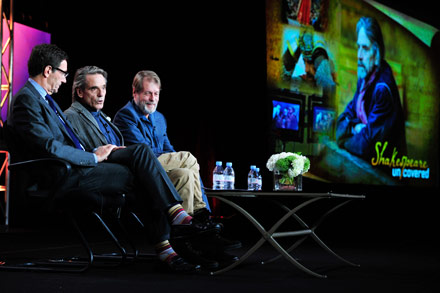 Actor David Tennant conducts an inquiry into Hamlet, seeking to understand why Shakespeare’s tragedy has made such a primal connection with audiences for over 400 years. Tennant takes us chronologically through the story, making detours to speak with scholars and fellow actors who’ve performed the title role. The actors testify to the difficulty of incarnating a character so obsessed with conscience and mortality: “This is a sharing of one’s soul,” confides Jude Law. The scholars offer interpretations of key scenes, which we experience in excerpts from movies and stage productions.

I’m here to tell you that, even in snippets, Hamlet works its magic. This is the first time I’ve ever experienced pity and terror in an educational program. 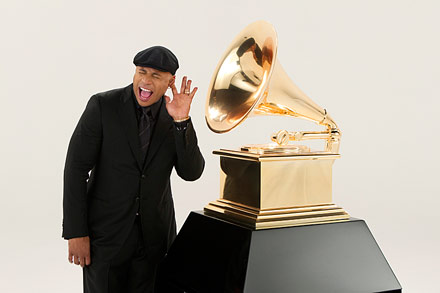 Two-time Grammy Award winner LL COOL J returns as host this year. The Black Keys and FUN will perform on the broadcast for the first time, while Mumford & Sons and Taylor Swift are returning to theGrammy stage on Sunday, Feb. 10 (Photo: Robert Voets/CBS ©2012 CBS Broadcasting Inc. All Rights Reserved)

“American Music Awards draw lowest ratings ever despite a performance by Justin Bieber,” read the headline after last fall’s telecast. I think a more accurate headline would have been “American Music Awards draw lowest ratings ever because of a performance by Justin Bieber.” Bieber was an embarrassment as he sat on a stool in a tank top and backwards baseball cap, accompanied by guitar. He scrunched up his face to sing faux-soulful bubblegum lyrics, straining for the high notes. His attempts to mimic African American inflections caused me – and apparently millions of other viewers – to flee the room in horror.

Wisely, the Grammys have made this year’s ceremony a Bieber-free zone. The singer’s camp was stunned to find him shut out of every category, despite the platinum success of his album Believe. Now that viewers can feel safe, I predict the Grammys will  have the highest-rated broadcast in its history.

Critics accuse David E. Kelley of having too much fun with his doctor and lawyer series (Ally McBeal, Chicago Hope, Harry’s Law), to the point of rendering them absurd. Kelley’s latest doctor series goes the opposite direction: no fun at all. Co-produced with CNN’s Dr. Sanjay Gupta, Monday Mornings is as generic as they come. Doctors (Ving Rhames, Alfred Molina, Jennifer Finnigan) roam a hospital’s corridors to deal with traumatized patients and anxious parents, not to mention their own personal melodramas. We get the usual tears, blood, arrogance, heartwarming music, medical jargon and soul searching. Lots and lots of soul searching.

David E. Kelley, all is forgiven. Please bring back the fun. 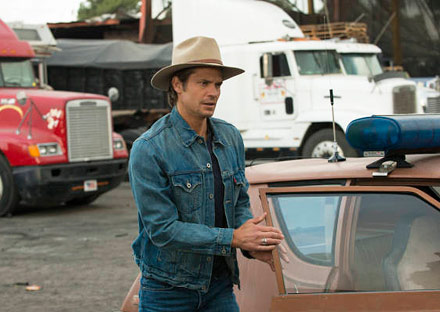 If you haven’t started watching season four, what are you waiting for? Justified remains a droll portrait of a deputy U.S. marshal chasing the bad guys in Harlan, Kentucky. In the latest installments, low-key Raylan Givens (Timothy Olyphant) digs into a cold case with connections to his childhood and his criminal father. Raylan goes about his business with a deadpan sense of humor, befitting the series’ source in Elmore Leonard’s writing. The Dixie-fried dialogue has the ring of authenticity, as does the portrait of small-town Southern life. Best of all is the lovingly detailed rogues’ gallery. 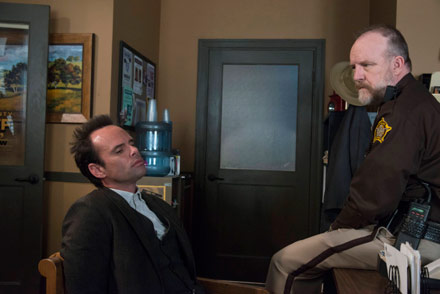 When you find yourself enjoying time spent with murderers, drug addicts and snake charmers, you know you’re in the presence of master filmmakers.