Corey Morrow holds a stoneware teacup of bi luo chun a few inches from his nose and inhales slowly. He deliberately slurps the Chinese pure leaf green tea as he swishes the honey-colored liquid around in his mouth as if tasting a fine wine.

The room is quiet as Morrow pinpoints the sequence of flavors as we taste tea on a February afternoon in his shop, Earth & Water Tea Lounge and Pottery Shop in Fairfield. “You can taste amazing things in your cup,” he says.

Upon first sip, he notices the soft and sweet quality of the tea. As the flavor evolves on his tongue, he detects a hint of grass. The aftertaste is harder for him to verbalize. He pauses and takes another sip.  In a few moments he’s found the elusive last note—cedar wood.

According to Morrow, tea contains a huge range of flavors, from yeast to cream, green pepper to asparagus. It can conjure up imagery as well, or even a feeling. One time, it transported him momentarily to the mountains, waking to the scent of ash seeping from wet forest floor. 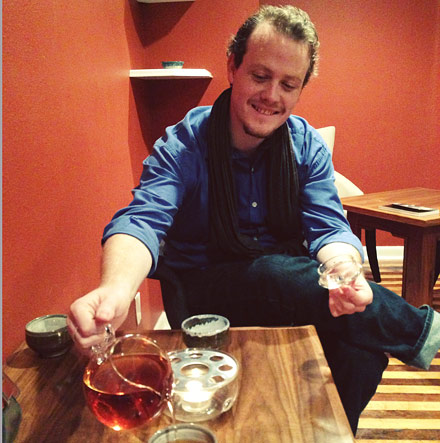 Everything in Morrow’s shop is conducive to enjoying fine tea, from the serene atmosphere to the local pottery and assortment of artisan desserts. Before he and Karen Aoki opened Earth & Water last June, he said many locals didn’t realize the depth of experience tea had to offer. The couple serves a wide selection of pure loose-leaf white, green, black, oolong, herbal, and pu-erh (aged) tea, as well as tasteful organic and fair-trade blends.

Aoki grew up in Japan, and Morrow said her country’s tea and bath culture inspired him.

“They really care about what they’re doing, and give such attention to detail,” he says. “We try to capture elements of the beautiful and reverent service culture.”

As a former bartender, Morrow says he enjoyed serving and tried to make unique, special cocktails for customers. But it wasn’t until he watched the documentary All in this Tea that he uncovered his hidden passion for tea.

The documentary told the story of David Lee Hoffman, a tea connoisseur who traveled rural Asia for decades searching for the finest organic and wild pure-leaf teas. Out of his efforts, he created the Phoenix Collection, made up of varieties from small tea farms and old tea gardens he partnered with during his travels.

“I didn’t have a lot of money,” he says, “but I ordered a significant introductory sampler from the Phoenix Collection anyway, with black, oolong, white, green, and pu-erh teas.”

Morrow rapidly fell in love with Hoffman’s teas and began creating a business plan for a tea lounge in Fairfield.

“It was a game; I didn’t know I was actually going to open a shop,” he says. “It was daydreaming. I thought, ‘If money were not an issue, what would I want it to be like?’ I was idealistic in that sense.”

When a job opportunity arose at a local business, Morrow had to make a decision. He opted to open the teashop. “I was far enough down the rabbit hole. I didn’t want to miss out on the opportunity.”

He wanted to serve the tea in handmade ceramic cups, so he partnered with local artist and avid tea drinker Mark Wilkins.

The complementary qualities of the pottery and tea inspired him to name the shop Earth & Water. Together, he felt they offered the community something “healthy, beautiful, old, slow, handmade, and of the earth.” 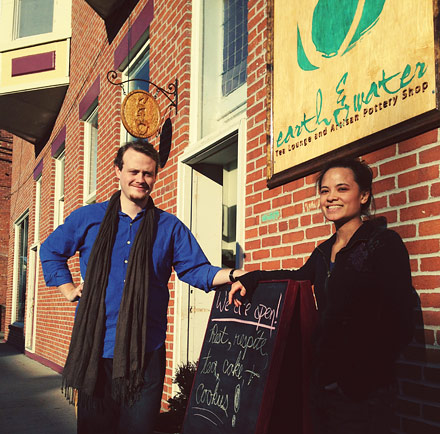 Outside Earth & Water on North Main Street in Fairfield

When Morrow conceptualized the store, he said his main goal was to offer something unusual, “nothing typical.” The store’s baked goods, for instance, each have an element of surprise or sense of wonder about them. What appear to be classic tea cookies burst with the exotic flavor of cardamom and browned butter upon first bite. Aoki also makes an assortment of delicious vegan and gluten-free treats, including Bananas Foster, cupcakes, and shortbread.

The Phoenix Collection is Morrow’s source for all of his pure-leaf tea. He purchases blends from two organic and fairtrade wholesalers in California. Morrow says part of the shop’s draw is its full-service offerings. He tries to help each customer find a tea to suit his or her taste buds and mood. If a customer is unhappy with a beverage, Morrow says he’ll replace it with another variety: “We like to take good care of people,”  he says.

Earth & Water Tea Lounge is approaching its one-year anniversary, and Morrow said it’s definitively been successful so far. Even coffee drinkers love the tea shop, as Morrow suspected they would. “I’ve always seen tea as something different than coffee,” he said. “I don’t like cake or pie, I like them both.”

And internationally, tea is the most consumed beverage in the world aside from water. “America is behind the times, and it’s only a matter of time before we catch up,” he says. “… I can see myself in this business for a long time.”

Side Effects: Unpredictable Consequences | When Prescription Drugs Have Life-Altering Consequences