Jude Law and Catherine Zeta-Jones in Side Effects.

Every prescription  medication carries a mega dose of warnings about its possible side effects: the undesirable secondary reactions that can accompany the drug’s therapeutic effect. But even the pharmaceutical company never predicted the consequences when Emily Taylor (Rooney Mara) took the experimental antidepressant called Ablixa. 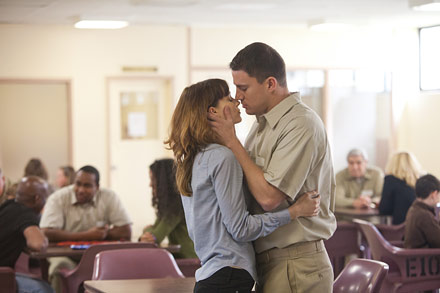 Rooney Mara and Channing Tatum in Side Effects.

Emily’s husband Martin (Channing Tatum) has just been released from prison for insider trading while Emily struggles with her debilitating depression. When Emily’s therapist Jonathan (Jude Law) prescribes Ablixa, the drug triggers some surprising side effects that will forever change the lives of Emily and Martin. And one of the biggest side effects of Emily’s prescription is the way it alters even the life of her therapist.

Mara and Law deliver convincing performances as the bizarre series of events unfolds. And while the film’s intricate premise is pretty far-fetched, this psychological thriller will grip you all the way to its conclusion and deliver a heavy dose of surprise. Possible side effects include tension and disbelief, and the tendency to recommend it to your friends. B+