Although the term “transcendental folk music” originates as a self-described tag from Colorado band Elephant Revival, this stripped-down style of folk Americana applies equally well to the new band the Good Mad, based in Los Angeles. This month’s column takes a closer look at these two intriguing groups and their recent CD releases.

Formed in 2006, Elephant Revival aspires to revive the human spirit through their song and dance collaborations. They describe their music as containing elements of gypsy, rock, Celtic, alternative country, and folk styles. Citing Nederland, Colorado, as their main home, the band consists of five multi-instrumentalists and singers from around the U.S.: Bonnie Paine, Sage Cook, Dango Rose, Daniel Rodriguez, and Bridget Law.

Across their three CDs, Bonnie Paine’s and Bridget Law’s vocals weave a magical spell reminiscent of a Cat Power-Natalie Merchant mix. The ladies lead the listener through aches and passion, ultimately lifting the spirit toward the light.

To begin an exploration of ER music, go to their self-titled 2008 CD where you will find “Ring Around the Moon,” “Twelve,” and the upbeat and celebratory “Sing to the Mountain.” The band’s signature acoustic guitar, mandolin, banjo, and fiddle lay down the perfect ambience that truly promotes the group’s goal to lift human spirits. From the 2010 CD Break in the Clouds, invest in “Drop” and then dip deeply into “What’s That” from the recent CD It’s Alive.

By sampling just these five songs, you are likely to embrace Elephant Revival as a new treasure that you can recommend to friends.

Formed in 2011, the Good Mad is a trio consisting of Adam Brooks (Ohio), Andy Fischer (Seattle), and TV actress Allie Gonino (Texas). All of them came to LA in search of acting jobs and ended up finding each other at local music venues. Their beautiful layered harmonies are distinctively country, echoing the style of another solid country-harmony band, the Rescues. 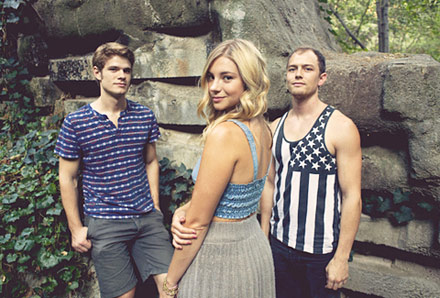 At a young age, Allie Gonino was inspired by a chance meeting with the Dixie Chicks and thereafter began taking classical violin lessons. Currently, she’s a regular character on the TV show The Lying Game, but she identifies most with being a musician.

Adam Brooks is the main songwriter and vocalist for the Good Mad. His father was a studio session guitarist in Nashville.  Andy Fischer has studied music since the age of nine, when he began joining choirs and developed his harmonic ear. He plays bass guitar and supports with vocals.
‘
From the Alta EP (2012), sample the perky “Stepping Stone,” which features Allie’s vocals and violin; “Good Ol’ Life,” on which Adam takes the lead; and “Falling Asleep (Shine Don’t Shadow),” on which the guys harmonize back and forth until Allie joins in to produce a delightful harmonic tapestry.

Some types of crazy are good. With Elephant Revival and the Good Mad, we are transported to a gentle transcendental place. Let’s take the challenge to spread their music to others of like mind.

Healing the Feminine Heart: Tips for Heart Health | Life-Saving News for Women and the Men Who Love Them