The most memorable experience at Kumbha Mela 2013 was bathing before sunrise in the middle of the confluence. Wooden boats of many sizes, from rowboats to dhows, had made circles around several large sandbanks, and people stayed close to their boats, so one could walk out into the middle, water only up to one’s knees, and be quite alone despite the 32 million other souls bathing on the sandbanks and along the confluence’s many shores. As the lights of the mela grounds lit up the dark, pre-dawn sky with a bright yellow glow, so inner light blazed. 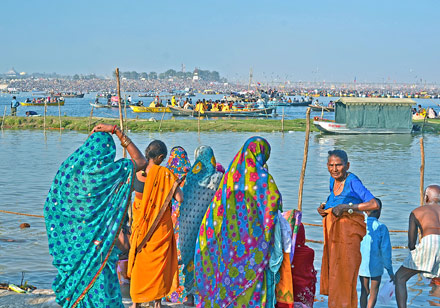 The dominant color at the mela was saffron and the dominant impression was coherent collective consciousness—all the millions with a single intention, each quietly nourishing that feeling in his or her heart, giving everyone else space—a smooth current of untroubled devotional feeling through the entire mass of people. 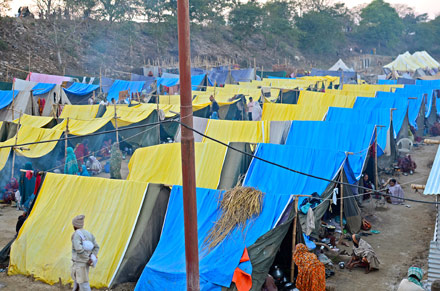 Where did this feeling come from? Certainly, almost everyone at the Kumbha Mela knew the story the mela celebrates. It is a central story of Hinduism, found throughout the Puranas and originating, in a much abbreviated form, in the Veda itself. It’s the story of the opposition of the gods and demons transformed into a sort of cooperation, during which they take opposite ends of the cosmic serpent and, using the world mountain as the post, churn the universal ocean, from which comes a number of primary delights, including Sri or Lakshmi, the goddess of fortune; Dhanvantari, the god of health bearing a kumbha (AKA kalasha) or vessel of amrita (the nectar of immortality) in his hands; Indra’s steed, who thus carries the impulse of unboundedness; the four elephants that establish the four corners of space and thereby create structure; and so on. 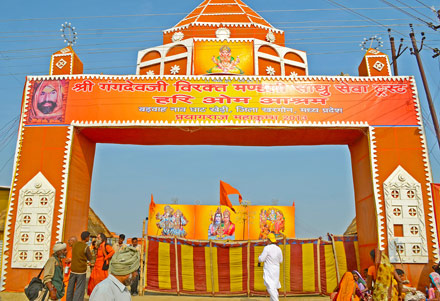 In other words, reciprocating activity at a deeply subtle level makes vortices out of which creation manifests from a chaotic, highly energetic sea—a description that sounds a lot like current physics theory. There is drama in the story, too, in which the demons violate the agreement they’ve made with the gods to share the result of their joint labors by stealing the kumbha of amrit, and Vishnu, on behalf of the gods, shifts into the desirable shape of a beautiful woman, beguiles the demons into giving her the kumbha of amrit and then runs off with it to the gods, spilling four drops onto the Earth—one at Haridwar, one at Nasik, one at Ujjain and one at Prayag or Allahabad, where the Ganga and Yamuna flow together. Hence, in these four locations celebratory festivals are held sequentially every three years.