Since the mid-19th century, the primary Kumbha Mela has been the one held every 12 years at Prayag. The 2013 mela was special, considered for reasons of Vedic astrology a Maha Kumbha Mela—one that occurs only every 146 years.

The mingling of the two primary rivers of North India, which water crops that sustain a large part of all humanity, is symbolic of the primal churning in the myth that creates orderly life from chaos. Dipping one’s body—one’s consciousness machine—into those waters when the stars and planets are properly aligned matches consciousness and matter. And it is not only humans who bathe in celebration of this myth of creation; it is believed that millions of devas and devis, impulses of natural law of all magnitudes, come to Prayag to dip in the confluence at the auspicious times during the Kumbha Mela. 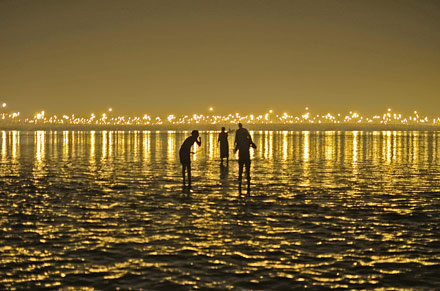 After dipping, one floats in a boat around the confluence as dawn fills the sky. Large flocks of Arctic terns mass and rise, swoop, dart and settle, as if the millions of devas and devis that had also gathered for a dip are borrowing their grosser bodies for a time. Like the birds, one dips as often as one likes, though six days are especially auspicious during the two-month festival. It all is quite magical. 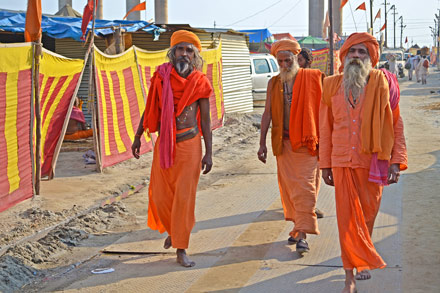 My most amusing experience was when visiting the naga baba tents in one section of the mela grounds. One naga baba saw my camera and wanted that I photograph him doing difficult yoga asanas. First he disrobed completely, except for his beads, and then he wrapped his legs behind his head and inverted, showing my camera’s lens extraordinary things not often seen publicly. 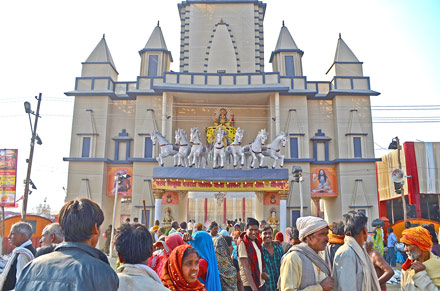 One of the pavillions

What impressed me more than the show of the naga babas or the tall pavilions of the various sects where saffron-robed swamis on microphones shouted out lectures at volumes intended to be louder than the shouts from neighboring pavilions, were the groups of simple village people sticking together where they camped and bathed. Sometimes you’d see a group moving through the immense crowd with a rope held around their perimeter and a young man with a flag at their head, the ladies with the ends of their sarees tied together so they would’t lose one another. I was told that for many this would have been the first time they’d traveled so far from their villages. 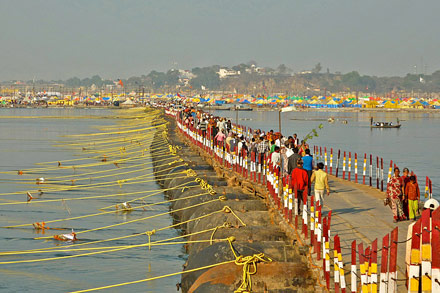 Some people carried their belongings on their heads in old rice bags, others in nylon duffles. As they traveled hundreds of kilometers from their villages they would camp wherever they were at the end of the day, building fires to cook their food and sleeping on the ground. At the mela they’d establish campsites for themselves, take their dips, and then begin the long trip home to their villages—extraordinary exercises in simple devotion.

Maha Khumba Mela 2013, Part I: A Holy Event That Only Happens Once Every 146 Years