John Stefaniak rides his bike down Dubuque St. in Iowa City on June 5, 2008.

When I was a kid, I always got my sister’s hand-me-downs.  She’s four years older, so when she got a brand-new blue-and-silver 26-inch Schwinn three-speed with hand brakes, I inherited her old 20-incher with its fat tires, green fenders, foot brakes, and only one unchangeable gear to pedal in, effectively making it a no-speed. (The 20-incher was probably the cooler bike, at least by today’s standards, but I didn’t know that then.)

In my Milwaukee neighborhood, bicycles were not really a mode of transportation—we did ride occasionally to the McDonald’s in Cudahy—nor, heaven forbid, a fitness program. They were a thing you did for fun, as in, “Wanna ride bikes?”   Depending on what TV show or mystery book had most recently captured our imagination, our bikes might be helicopters (from a program called Whirlybirds: we were copter pilots named Chuck and P.T.), or horses, or little blue coupes (Nancy Drew), or popcorn machines, where you turned the bike upside down and used the pedals like cranks to make handfuls of grass or apple blossoms fly out from between the wheel and the fender. That one worked better with a tricycle, actually.

My little brother—who, incidentally, couldn’t be expected to ride a hand-me-down girl’s bike, could he?—was a bicycle-accident magnet. At age seven or eight, he broke his two front teeth off when he went down face first over the handlebars in the alley behind our house. Five or six years later, he took a corner too fast and broke both arms the night before he was to compete in his first junior golf tournament.

Apart from getting my foot caught in the rear wheel spokes (not recommended) while riding on the back fender of my cousin Monda’s bike, I saved my share of childhood stitches and broken bones for tight-rope walking on the back porch rail and the deliberate misuse of folding lawn furniture.

Flash forward (not all that many years) to the first Christmas after John and I were married. This was back in the ’70s—the 1970s, I should perhaps specify. We were both still in college. He had a semester to go and I had my whole senior year left. (Wait a minute, wait a minute, our kids used to say. How come you can get married when you’re still in school but we’d better not bring home any prospective spouses until after we graduate? The answer is obvious: John and I were exceptionally mature for our age.) That first year, we lived in a one-bedroom apartment upstairs from my Aunt Madeline, who was born in the old country and gave us a huge break on the rent in return for shoveling snow and cutting the grass on her double lot. She made us use a non-motorized lawn mower, the kind that makes a lovely clickety-tick-tick-tick-tick when you push it. She had an electric lawn mower, but she was afraid we’d run over the cord. Aunt Madeline never understood how exceptionally mature we were for our age.

So there it was, our first Christmas morning as husband and wife, and I’m waiting with my eyes closed so I won’t see what John is bringing up the front hall stairs into the living room, where we’ve set up our very first Christmas tree, decorated with paint-them-yourself wooden cut-out ornaments and low-cost candy canes. When I heard a clickety-tick-tick-tick noise, you can be sure that it was very hard not to take a peek, but John said, “Wait! Wait! Wait!” and went back downstairs for more.

It better not be a lawn mower, I was thinking.

When I opened my eyes, I couldn’t believe what I saw: not one but two brand-new green-and-silver 26-inch five-speeds—a matching pair: one girl’s, one boy’s.

I felt in that moment that our marriage would last a lifetime—or at least as long as we had those bikes.

They were simply the best surprise present I had ever received. They were like the ending of a short story by Flannery O’Connor: “totally unexpected and totally right.”

In retrospect, it seems as if we rode those bikes everywhere together—once the snow melted—for years and years. In reality, the birth of our son two and a half years later curtailed our matching bike trips pretty effectively. As a matter of fact, the last year I applied for a bicycle license, as required in West Allis, Wisconsin, was the year that Jeff was born.

Dusty though they were, our matching bikes came with us from Wisconsin to Iowa, where, sad to say, John’s soon disappeared. He said I should say that he loaned it to a saxophone player, along with a ten-dollar bill, and he hasn’t seen either one since. He also said I should say that if the aforementioned saxophone player is reading this and still has the bike, we’d love to get it back. (You can keep the ten dollars.)

In Iowa City, the bicycle became our major mode of transportation. John scrounged up a recycled number for work, and I rode my formerly matching bike to workshop on Tuesday afternoons. (Not to brag, but coming home was all uphill.) A few years later, I rode my bike to work at ACT, where so many MFA grads find day jobs to support their writing habit. And I still recall, with a pang of parental nostalgia, the first time our son Jeff rode downtown on his bike—a 16- or 20-incher not too different from the one I inherited from my sister. Each of our three children fell off a bike at one time or another. Stitches were sometimes involved, but nobody knocked any teeth out. It was their father who learned the hard way that you can’t zip up your fly while turning a corner—Look, ma, no hands!—at the bottom of a hill.

My husband John has a different bike now, inherited from our friend Leslee Becker when she left Iowa City in 1986 or ’87, which he rides to work year round (weather permitting and sometimes not).   I’m afraid he still enjoys coasting down the long sidewalk along the river on Dubuque Street at “rush hour” with his hands behind his head, occasionally calling to the drivers in the cars that inch toward downtown beside him, “My transportation costs are zero!” 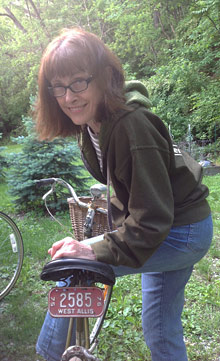 Mary Helen Stefaniakon the bicycle meant for her, June 2013.

Speaking of riding down Dubuque Street in Iowa City, I have included a photo of John and his bike that could have been taken this year—say, on May 30th or 31st—although it actually dates from the Great Flood of 2008, when we took a ride out to the Coralville Reservoir on the last day that it was possible to do so.

As you can see, I’m still riding my Christmas bike with the West Allis license plate that expired in 1976.
Mary Helen Stefaniak is author of the award-winning novel The Cailiffs of Baghdad, Georgia.