The CW, home of teen soaps like Gossip Girl, goes in a different direction with Breaking Pointe (Monday, 8 p.m.). Beginning its second season, the docuseries peeks behind the scenes of Salt Lake City’s Ballet West, where dancers dedicate themselves to an exacting art form.

That’s not a complaint. It’s easy to while away an hour gawking at the main characters, no matter how tawdry they get. 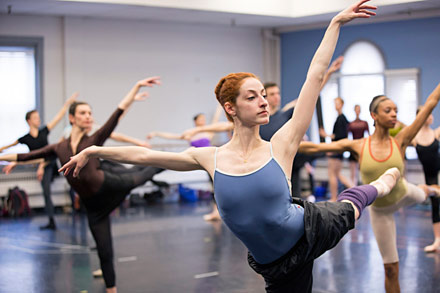 The season premiere is an enjoyable hour of backbiting and bickering. When two romantically involved dancers start having problems, another dancer counsels them: “I feel like you guys have, like, been a little, like, different than you were, like, in the beginning of the relationship.” (I said they had amazing bodies, not amazing brains.) As Ballet West begins rehearsing Cinderella, the artistic director says he hopes to “bring out that sadness and that joy that is so much a part of the story.”

I’m not sure this bunch is capable of sadness and joy. Sneering and scheming is more their speed. But, as I said, that’s not a complaint.

Camp
Wednesday, 9 pm (NBC)
In this dramedy, a brainy misfit named Kip (Thom Green) is forced to attend a summer camp that’s seen better days. Little Otter Family Camp is run by Mack (Rachel Griffiths), a woman who’s not quite up to the task. Her facility is falling apart, while her rival’s summer camp is doing so well that it treats its campers to lobster for dinner.

At first glance, you expect Camp to be a snarky farce along the lines of Meatballs. It offers sex and drugs, hunks and hot girls, along with other easy satirical targets. But the characters prove to be likable, with actual human qualities. We learn why Mack cares so much about saving Little Otter, and why Kip has his reasons for being alienated.

In short, Camp has a heart. I wouldn’t change the channel to any other show in this timeslot, even if it offered lobster.

City Girl Diaries
Sunday, 8 pm (Style)
This new reality series immerses us in the lives of five ambitious women in New York City. “This group of girls is completely crazy,” says Marianne, an editor at In Touch magazine. “We should not be loose on the streets.”

After an hour of City Girl Diaries, you feel like you’ve rushed from Brooklyn to the Lower East Side to Midtown and back again, hitting every party and café along the way. You can almost smell the taxicab fumes on your clothes. Entertainment reporter Raina picks up a guy in Leigh’s beauty salon. Fashion designer Leila hustles to get a publicist. Kelly throws a huge birthday party for herself to promote her business. “I just want everybody to get along and no drama,” she says.

Yeah, good luck with that. By the end of the night, Kelly is in tears and Raina has her tongue down the throat of Leigh’s former boyfriend.

These women probably shouldn’t be loose on the streets. But as long as they are, I’m happy to trail along on City Girl Diaries.

Speaking of clichés, is anything drearier in contemporary animation than trashing yet another institution we hold dear? In High School USA!, teachers are idiots, parents are creeps and life is (yawn) meaningless.

The cartoon puts you in a foul mood, but it’s nothing an issue of Archie couldn’t cure.

Supermarket Superstar
Monday, 9 pm (Lifetime)
This new reality series offers a glimpse of the supermarket battlefield. Home chefs compete to develop their products for the mass market in grocery stores. Experts give them advice in cooking, branding and pricing. At the end of each episode, the contestants present their perfected creations to a supermarket buyer, who chooses the one with the most potential. Never before have oatmeal cookies been so compelling.

A woman named Latrice has high hopes for her peach cobbler cupcakes. But branding expert Chris Cornyn informs her that “the cupcake, it’s been done.” As you’re reeling from that revelation, chef Michael Chiarello tells another contestant that butterscotch is a losing proposition.

Supermarket Superstar now has me rooting for cupcakes and butterscotch. Who knew they were underdogs?

In It for the Long Haul: A Bicycle Meant for Me

Zombies vs. Dinosaurs in Outer Space! | Axe Cop Aims to be the Most Awesome Cartoon Ever