Deb Arnold and friends take a break from biking to enjoy the scenery.

I’m on a mission this week to hunt down the ringleaders of community cycling in Fairfield. Although Fairfield is a small town, its citizens have a big interest in fitness and health.

My first stop is AJ’s Bike Shop, a local institution for bike lovers, where the eponymous owner greets me wearing a mechanic’s apron. At first reluctant to explain his love for bikes, after much prodding he shares that in his youth he cycled across the U.S. with a friend. He realized that it wasn’t just the act of biking that was enticing, but also “the experience that the bike brought into my life.”

To illustrate his point, AJ walks me over to the bulletin board near the front door of his shop. In between faded clippings, he has posted quotes from customers. One reads: “My bike is one of my happiest things.” Another says: “The first time I remember feeling free was on my bike when I was a kid. I remember flying through puddles. I was fearless.”

AJ also shows me various self-made maps, including “The Fairfield Four Corner Map,” which he developed on his daily bike ride to see how far he could go without leaving city limits. Every day he would seek out a new road and try to extend the boundaries of his route.

Inspired by AJ’s enthusiasm, I set off to contact more local cyclists whose names and numbers AJ’s assistant has scribbled on a Post-It note for me.

The first person I call is Deb Arnold, who spearheads a local women’s cycling group. We arrange to meet in Howard Park one drizzly spring evening. As we walk along, we excitedly spark conversation in one another. Deb tells me about  gathering with friends to ride 60 miles for her 60th birthday, and recalls another biking trip to Colorado with six other ladies.

Deb lights up as she proclaims that the real reason she gets in the saddle is that it makes her feel ten again. I think back to the quote on AJ’s wall and how biking promotes childlike exuberance in so many people.

As a cyclist passes us on the path, Deb informs me that he is a fellow bike enthusiast and shouts after him to join the ride to meet RAGBRAI’s pre-route inspection team. “Ride with us,” her voice echoes. I find myself admiring this small lady nearly a foot shorter than I and think, “I hope I have that much spunk at 60.” 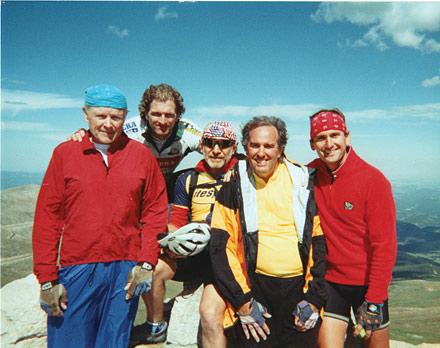 Next on my list is Jeff Feist, a cornerstone of the Fairfield biking community.  I meet up with him at local jewelry store Americus Diamond, where he works. We sit in the gallery room as he shares his many stories.

Twenty-one years ago, inspired by RAGBRAI, Jeff decided to attempt his first 200-mile ride. He chose to set out solo on a circuit that took him from Fairfield to Bushnell, Illinois, and back again. Jeff made the trip safely in 15 hours. For 20 years thereafter, he rode the same route every year. Locals later named it “The Feist Double” and other cyclists eventually joined the ride, too.

Jeff Feist on his way up to the summit of Mount Evans. (photo by Sandy Kellet)

Of all of his rides, though, Jeff feels especially passionate about cycling 14,240 feet to the summit of Mount Evans in Colorado. He attempts to explain the hardship of cycling 28 miles uphill in increasing altitudes, where the air is so thin your lungs and heart beg you to stop, and snow or hail might pummel you along the way. He’s completed this ride ten times, sometimes accompanied by fellow hardy riders. While most people would find this sort of exertion a total nightmare, Jeff says it’s pure exhilaration, calling it “a remarkable challenge” that he loves.

When it comes to cycling, Jeff says he has no choice—he has to ride. Three times a week he meets up with a group of cyclists, and on Sundays they gather at his house for rides in which each chooses a preferred distance and speed. “If you want to ride, come to my house on Sunday,” he says. Like many other cyclists in Fairfield, Jeff rides for the pure joy of it.

Zombies vs. Dinosaurs in Outer Space! | Axe Cop Aims to be the Most Awesome Cartoon Ever