Web Therapy is a series where comedians amuse each other and, more often than not, the viewers (Tuesday, 10 p.m., Showtime). Lisa Kudrow plans a dumb, vain, manipulative therapist named Fiona, who communicates with people via web chat. Each half-hour episode consists of a double-screen image, with Kudrow on one side talking to stars like Megan Mullally and Steve Carell on the other. In season three, they improvise silly conversations about a misbegotten Broadway musical and a phony self-help cult called Quorum. 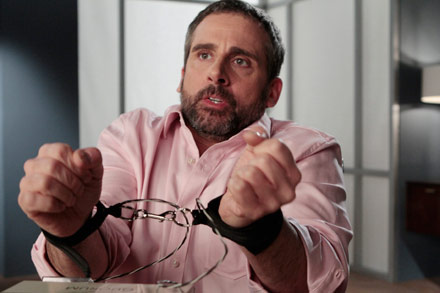 Carell plays Jackson, the head of Quorum, and this week he hooks up both Fiona and himself to a “soul-cleansing machine.” The machine makes a pleasant DING after a truthful answer and provides an electric shock after a lie. Jackson gets a shock when he denies that he once sold timeshares. He takes an additional jolt when he insists that they were “spiritually based timeshares.” BZZT!

A blooper reel over the closing credits shows the stars having a good time. You’ll have a good time, too. DING.

Best Daym Takeout
Wednesday, 9 pm (Travel Channel)
Daymon Patterson is a big guy in a hoodie who conducts tours of American takeout joints like a brash hip-hop MC. He lays down a percussive line of patter while searching for the best takeout in one city per week, using his car as his crib. The series’ editor draws inspiration from Daymon’s flow, so that Best Daym Takeout pops like a Jay-Z track.

How much does our excitable host love food? Never have I seen such passion for gravy, beef and cheese on the small screen. Daymon moans and squeals in his front seat. At a Chicago pizza place, he affectionately converses with a slice of pepperoni. “That’s the type of pie you want to marry,” he concludes.

Daymon makes the best case ever for human/food intermarriage.

Psychic Tia
Saturday, 9 pm (A&E)
Tia Belle runs a psychic shop in New Jersey, dressed in a black Morticia Addams gown and a 20-pound cross necklace. She heals people, casts spells and communes with the ghosts of clients’ loved ones. And she manages these miraculous feats with nothing more than candles and a deck of cards.

Oh, and a New Jersey attitude that would put Tony Soprano to shame. Tia has a big mouth and an abrasive personality, speaking in a thick Joisey accent. She is conspicuously lacking in mysteriousness when she screams at her son: “STOP BUSTIN’ MY BALLS!”

If I were a ghost, I would refuse to materialize when I heard that ear-splitting voice. I would waft the hell out of New Jersey.

In this week’s stunning episode, the cable news network faces challenges on several fronts. In each case, personal feelings intrude on the dispassionate business of gathering news. 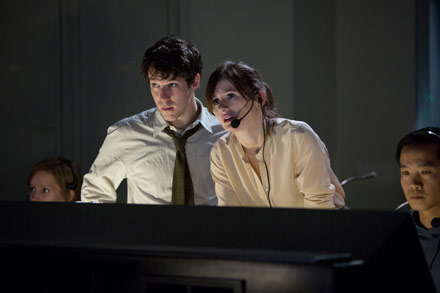 Neal (Dev Patel) arranges an on-air interview for his contact at Occupy Wall Street. When it goes badly, she punches him in the gut. Jim (John Gallagher Jr.) has a chance to redeem himself in covering the Romney campaign but lets his heart get in the way, with disastrous consequences. Most affecting of all is Maggie’s (Alison Pill) experience at a Ugandan orphanage – a tale she recounts back in New York City to a sneering lawyer (Marcia Gay Harden). She explains why she fell apart after her encounter with an orphan boy who was fascinated by her blond hair.

Warning: At the climax of this plot strand, you will feel like you’ve been punched in the gut.

Hot Listings Miami
Tuesday, 8 pm (Style)
Katrina Campins is one of the rare real estate brokers who deserve their own reality series. Like all the others, she sells luxury properties to the rich and famous. But she distinguishes herself with a classy presence. Katrina is smart and well spoken, and she has a playful relationship with the members of her Florida family business. She seems like a decent human being, albeit one with an extraordinary drive to succeed. “The word "can’t" doesn’t exist in my vocabulary,” she says.

Hot Listings Miami has the bright idea of including a couple of villains, allowing  you to root even harder for Katrina. Tomi and David are more typical of reality-show brokers: mean, manipulative and arrogant. “This is the lamest party I’ve ever been to,” David whispers to Tomi at a Katrina shindig. “They don’t even have cheese cubes!” I’d like a cheese cube myself…to throw at this creep.

Could Hot Listings Miami be any more entertaining? I’d say it can’t – if the word “can’t” existed in my vocabulary.