﻿David Lynch with students at Maharishi University of Management.

DRUM ROLL, PLEASE:  visionary filmmaker David Lynch is putting his name on a new M.A. program in film at Maharishi University of Management (MUM) in Fairfield. A yearlong studio program, the David Lynch M.A. in Film allows participants to dive deeply into their own creative process and realize a major project.

Lynch, a three-time Academy Award nominee for Best Director, wrote about his creative process in the book Catching The Big Fish: “Ideas are like fish. If you want to catch little fish, you can stay in the shallow water. But if you want to catch the big fish, you’ve got to go deeper.” 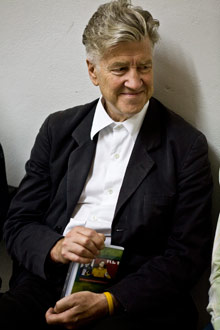 To find out more about the new program, I spoke to Stuart Tanner, co-chair of MUM’s Media and Communications Department as well as an acclaimed producer and director of documentary films for the BBC, National Geographic, and Discovery Channel. In his quintessentially British accent, Tanner graciously answered my questions about the department’s latest offering. 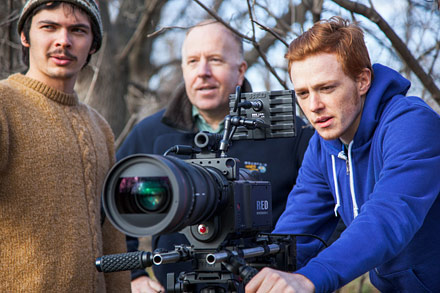 Tanell Pretorius: What do you think makes David Lynch such a fascinating director?

Stuart Tanner: David Lynch is interesting in the sense that he is more like an artist than a filmmaker, each piece of work being like a canvas in an exhibition, an abstract expressionist work in film. In his work there is a certain tension between the surface veneer of the American Dream, an ideal life in suburbia, and the forces of the unconscious and dream world. His films are exploratory and mythological. They are modern mythological fairy tales that do not follow traditional Hollywood plot logic but more of an artistic, intuitive logic. They explore the space, the gaps between the logic of our own life—we are constantly in a process of knowing what is going on and exploring the sheer mystery of it all.

Why do you think David Lynch is a good fit for MUM?

David Lynch is a pure and wonderful example of an artist who follows a vision consistently and without compromise and therefore produces works that will continue to have an impact and resonance for a long time. He has also combined that with meditating for 40 years and being an advocate of meditation for all the benefits that it provides. And those are exactly the two things that we want for our students. 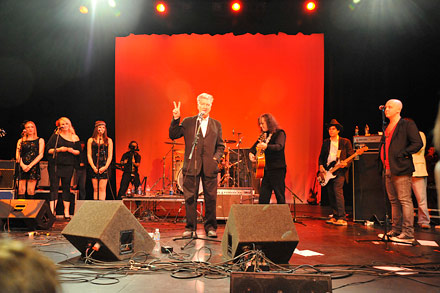 ﻿David Lynch with Donovan and James McCartney at the Sondheim Center in Fairfield.

What will Lynch’s involvement be in the program?

Students will have the opportunity to meet with David Lynch for a few hours over two days in Los Angeles. The students will have conversations with Lynch about film and the creative process, and other things that interest them.

How long has the Media and Communications Department at MUM been running?

That is significant growth! What would you attribute your success to?

We are brilliant. [laughs] The magical recipe is a lot of emphasis on project work so that people learn by doing, and the idea that the degree is about becoming highly employable in the creative industries; that, and Consciousness-Based Education.

And how would you define Consciousness-Based Education?

Well, the brain is the box and learning is what you put in it. Consciousness-Based Education makes you aware that, number one, you do have a box, and also that you can expand that box, by experiencing boxness. [laughs]

How do you expand the box?

Creativity is not a specialty; it is an innate ability for a human being. It is not really about developing creativity; you simply get rid of anything that gets in the way of creativity. That can be stress, emotional upset, and noise in the head. Your brain is like a sophisticated transmitter, receiving and sending out information all the time. Your awareness is what tunes in to a particular channel. If there isn’t clarity, your awareness can’t fine tune into a channel—all you end up with is hiss.

Consciousness-Based Education gives you the opportunity to silence those signals and to experience deep silence, pure consciousness; no noise. From the research and reports of experience, we know that when you come back into activity you experience less noise and more clarity.

And how is that implemented in the classroom?

You do the groundwork that prepares you for the creative experience and in the classroom you have the time, space, equipment, and advice on the craft to manifest your idea into something that everybody can see and experience. The most fundamental things are clear vision and clear execution—and this leads to a strong experience for your audience.

Do you have people with different interests joining in on the program?

Yes, in actual fact not everybody needs to make a major film, because people may collaborate and play different roles. They can be interested in something more artistic or something more on the business side, like setting up a media company. All that we require is that film plays a part in that. It does not matter as much what the project is. The program is about having a year to deeply go into a creative experience for yourself and as a team.  This can make a difference to the rest of your life.

Whom would you say is the program mostly targeted towards?

Anybody who has interest in the creative industry and wants to work on a major project individually or in a team.

For more information on the new program, visit http://filmschool.mum.edu or contact DavidLynch.ma@mum.edu.