You’d expect a TV movie called Escape from Polygamy to be a predictable docudrama. It’s true that the title gives away the ending, but this Lifetime production offers plenty of surprises in its story of a teenage girl trapped among religious fundamentalists (Saturday, 7 p.m.).

Julina (Haley Lu Richardson) joins a creepy New Mexico sect when her true-believer mother (Mary McCormack) becomes wife #4 for a dour old man. Julina is smart, playful and inquisitive, and she manages to look good even in a long pioneer dress. Unfortunately, these are considered “sinful” qualities by the sect’s leader (William Mapother), who humbly calls himself the Prophet. Sinfulness is a constant topic of conversation on the Prophet’s ranch, with the elders alert to any signs of disobedience. So there’s a Romeo and Juliet sense of danger when Julina and the Prophet’s skeptical son (Jack Falahee) become attracted to one another.

Escape from Polygamy is blessed with skillful actors and a vivid setting. The movie satisfies your curiosity about polygamous communities while also mustering artistic touches. It’s undoubtedly sinful to enjoy the story as much as I did. 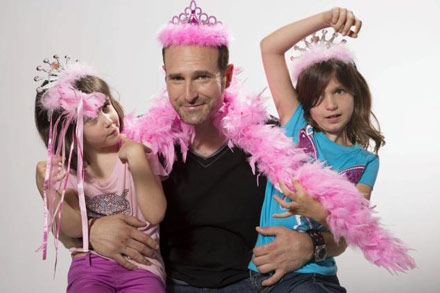 This new reality series focuses on four dads who handle the bulk of the childrearing in suburban Texas. Three of them do it because their wives or girlfriends have high-powered jobs; the other is a single dad.

It sounds like an enlightened arrangement – until the dads open their mouths. Though in their late 30s or 40s, they still talk to each other like sniggering frat boys. Their conversations fixate on hot babes and sex, even as the kids play innocently nearby. Indeed, the single dad is not above using his child as a pickup device in the grocery store, to the hooting approval of his friends.

Do the stars of Modern Dads feel the need to proclaim their manliness because they feel less than manly in the nurturing role? That doesn’t sound very “modern” to me.

Dogs make me feel happy, so I looked forward to this special about their extraordinary abilities. Beautifully produced, it offers the latest scientific insight into canine behavior while introducing us to real dogs who’ve done remarkable things.

At first I smiled at the stories of pets who help the blind and work around the farm. But I grew uneasy as the stories became ever more grandiose. A Labrador named Endel does everything for his disabled owner, from picking out groceries to mailing letters. The owner even gives the dog credit for saving his marriage and repairing his relationship with his kids. When the two of them were hit by a car, Endel limped off to a hospital to get help. For his courage, he won England’s Victoria Cross.

Last year’s Video Music Awards was a snore, despite extravagant attempts at naughtiness by the likes of Rihanna and Pink. Not surprisingly, it was also the least-watched VMA ceremony in years.

With Miley Cyrus up for three awards, I was all set to skip the 2013 show…until word came of a Lady Gaga performance. Gaga, missing from the VMAs last year, will perform the debut single from ARTPOP, and it’s sure to be an event. In previous VMA appearances, she has covered herself in blood, worn a meat dress, and impersonated a man. No one knows what provocations she has planned this time, but I think it’s safe to say that on Monday morning no one will be talking about Miley Cyrus.

I’ve been enjoying this reality competition about the cosplay subculture, in which super-fans compete in costume contests on the convention circuit. They put heart and soul into replicating characters from videogames, movies and TV, simply for the purpose of being adored by the fantasy community. They measure success by the number of followers or, in the case of breakout stars like Yaya Han, by the number of business deals. Yes, you can make decent money impersonating an elf.

The fun part of Heroes of Cosplay is seeing how far our heroes will go for a good costume. I mean, I like to play Darth Vader as much as the next guy, but these people put my Halloween efforts to shame. I’ve drawn inspiration from the series’ Holly and Jessica, who risked suffocation via plaster casting to create realistic Dungeons & Dragons characters. Sample dialogue: “I’m just going to do some quick dry-brushing of the horns.”

I thought I was a perfectionist myself, but not compared to Becky, who prepares the world’s greatest Merida costume from Brave. To create the striking red wig, she hand-colors every strand of hair with magic marker. Why didn’t I ever think of hand-coloring a wig?

Now if you’ll excuse me, I have some horns to dry-brush.

Cops vs. Cops: Luther | London Police Turn Against Their Own in Luther