Hamburg Inn No. 2 has been serving burgers, pie shakes, and home fries since 1948.

Beloved Iowa City institution the Hamburg Inn No. 2 is celebrating 65 years of feeding families, writers, students, politicians, and more on Tuesday, September 3, by serving a free lunch to everyone who comes to dine between noon and 2 p.m. A 65¢ or more free-will donation to the Crisis Center Food Bank is encouraged but not required.

Burgers and a Darn Good Breakfast
The restaurant, which opened in 1948, has been called the best greasy spoon in Iowa, and in addition to their award-winning burgers, they serve breakfast all day. On the 3rd they will be serving their original quarter-pound burgers, hot dogs, and garden burgers with sides and drinks. Congressman Dave Loebsack will drop in to help celebrate.

Politicians are Full of Beans
Hamburg Inn No. 2 has seen its share of campaigning politicians, from Ronald Reagan, Bill Clinton, and Barack Obama to Dennis Kucinich, Pat Buchanan, and Howard Dean. The Burg is also the host of the Iowa Coffee Bean Caucus, in which patrons vote for their favorite candidate by placing a coffee bean in a jar labeled with the politician’s name. 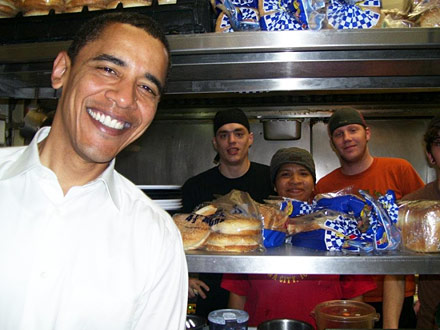 Obama, seen here socializing with the Burg’s cooks, is one of many politicians who’ve made Hamburg Inn No. 2 one of their campaign stops.

Writers’ Retreat
The restaurant has a long history of supporting writers, acting as an office, and hosting readings and book releases. The Burg itself has even been the subject of a book, The Burg: A Writer’s Diner, a collection of essays and photos edited by Marybeth Slonneger. Author Mary Helen Stefaniak’s essay from that collection, “The Burg and I,” was also published in the June 2012 issue of The Iowa Source. In the essay, Stefaniak shares that her kids spent so much time in the restaurant while she attended the Writers Workshop that they essentially grew up there. 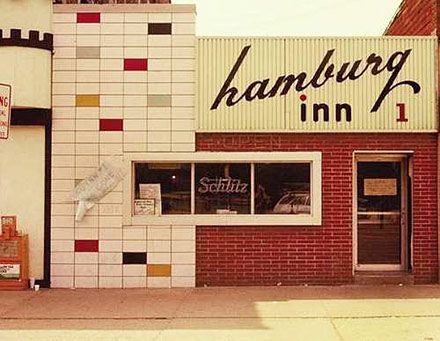 Growing up in the Restaurant Business
Dave was only one year old when his parents bought the restaurant. He spent his early years living over the store, and when he was older he also worked there. He had no plans to take the restaurant over himself though. “When I was a child, this was the last place I wanted to be,” he says ruefully.

After serving in the Air Force and then working briefly at Radio Shack in their manager-training program, Dave was more open to the idea of taking over Hamburg Inn No. 2, and he has now happily owned and run it for 34 years. He credits his great staff, who have always made customers feel welcome and happy, for a large part of the restaurant’s success.

Will Dave be retiring anytime soon? If he does, it won’t be an easy decision, “There’s a lot of history and emotion tied up in it and it’s going to be hard for me to let go if I ever decide to do that.” Dave hopes when that day comes that he can find a new owner who will appreciate and preserve everything that makes the Burg such a beloved Iowa City restaurant, even while expanding and improving on all that Dave has done, just as Dave himself has worked to preserve and expand his parents’ vision for all these years.

Cops vs. Cops: Luther | London Police Turn Against Their Own in Luther