What Maisie Knew is about a divorced couple with a six-year-old daughter named Maisie, played to perfection by Onata Apriele. Surprisingly, it’s based on the Henry James novel of 1897, an era we rarely associate with broken marriages and child custody. But there you have it, divorce is not a recent invention. Deferring to the heart of the novel and to the perceptions of the child, the filmmakers update the drama to contemporary Manhattan and deliver a captivating tale. 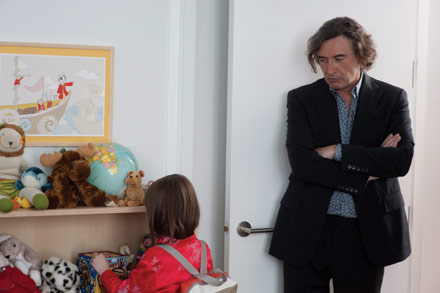 ﻿Steve Coogan in What Maisie Knew.

Susanna (Julianne Moore) is Maisie’s mother, an aging rock star trying to keep her career afloat. Beale (Steve Coogan) is Maisie’s dad, an art dealer, always talking on his cell phone. The court has awarded joint custody to mom and dad. Or as the novel explains, Maisie was “divided in two and the portions tossed impartially to the disputants.” Sadly, neither parent is up to the task of being a responsible guardian. And they refuse to function as a team in Maisie’s best interest. Beale and Susanna are consumed by mutual hostility and their conversations are screaming matches—mostly audible only in volume, as a child would hear them. They hug and kiss Maisie and tell her they love her, as though their caring gestures will smooth over the damage. But as the novel explains, “they had wanted [Maisie] not for any good they could do her but for the harm they could, with her unconscious aid, do each other. She should serve their anger and seal their revenge.” 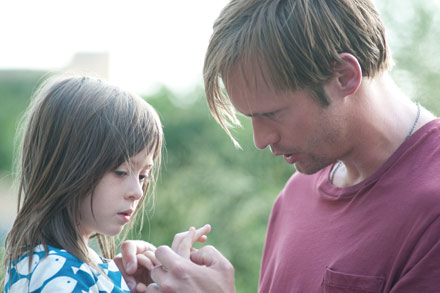 ﻿Onata Aprile as Maisie and Alexander Skarsgard as Lincoln in What Maisie Knew.

Okay, you get the picture. But as sad as it all sounds, the film is well worth watching. Writers Nancy Doyne and Carroll Cartwright create an all-too-real version of James’ story with a modern twist and, yes, they take some liberties but hooray for Hollywood, it worked for me. Co-directors Scott McGehee and David Siegel bring out the best in every character, especially Maisie. The movie belongs to Onata Aprile and we can’t take our eyes off her. At age seven, she is adorable and believable. She might be a naturally gifted actor, or maybe she was brilliantly directed. I’m going to assume it’s both. 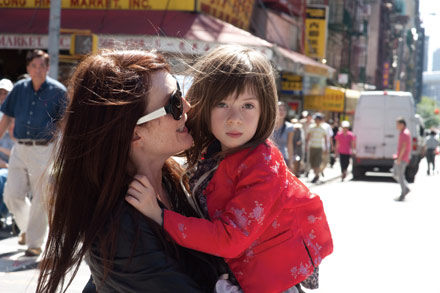 There’s another dimension to this story that involves two more characters, but that’s all I’m going to say. But I will tell you that even sad stories can find a bright light of hope, and like me, you’ll be cheering for Maisie all the way.   A