Michael J. Fox is one of our most beloved sitcom stars (Family Ties, Spin City), and he’s become even more so during his fight with Parkinson’s disease. With The Michael J. Fox Show (Thursday, 8 p.m., NBC), he returns to sitcoms as an unconventional leading man, given the involuntary contortions of his face and body. It’s a gutsy move, both for Michael and for NBC. Viewers have deep reserves of goodwill for this actor, but few would sit through a labored comedy merely for charity’s sake.

Believe me: You will not laugh at The Michael J. Fox Show just to be nice. You will laugh because you can’t help yourself. The single-camera series puts Fox’s physical predicament in a comic context, with no trace of sentimentality. Indeed, it’s the opposite of sentimental, as the star mercilessly pokes fun at his limitations. Fox sees the humor in his condition and allows you to laugh along with him. 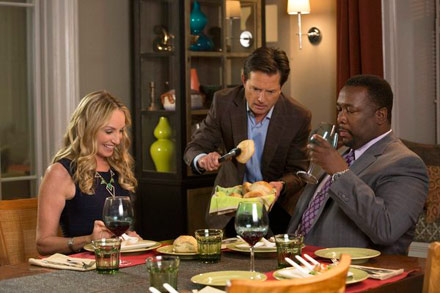 He plays Michael Henry, a former TV news star who left work after developing Parkinson’s. His family tires of having him around the house, while his old boss wants him back at work so the network can play the sympathy card for higher ratings. Michael worries he’ll perform poorly but still be given credit just for trying. “I don’t want to be the guy who gets a standing ovation every day at work,” he grumbles.

Fox surrounds himself with fast-talking comic pros and has no trouble keeping up with them. You don’t just give him credit for trying; you give him credit for turning in yet another unforgettable performance. Sorry, Michael, but for that you deserve a standing ovation.

The Crazy Ones
Thursday, 8 pm (CBS) 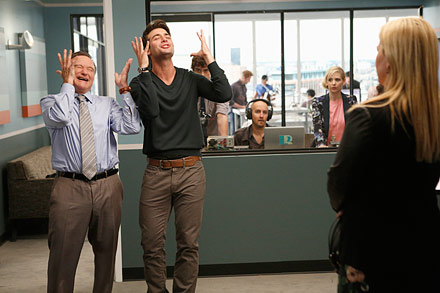 Simon Roberts (Robin Williams, left) and Zach Cropper (James Wolk, right) must pull out all the stops and convince Grammy Award-winner Kelly Clarkson to record a new twist on a classic advertising jingle for their biggest client on the series premiere of The Crazy Ones. (Photo: Cliff Lipson/CBS © 2013 CBS Broadcasting, Inc. All Rights Reserved)

It would take a miracle to get me interested in a whole season’s worth of Robin Williams. He’s been doing the same speed-freak funny-voice free-association shtick since Mork and Mindy in the 1970s, and CBS has built yet another sitcom around it.

But wait: The Crazy Ones finds a perfect context for Williams’ act. And for the first time in years, it’s funny again. Williams plays Simon Roberts, an eccentric advertising genius who runs an agency with his daughter, Sydney (Sarah Michelle Gellar). The business has fallen on hard times, so Simon must summon all his wit and charm to woo back his once-faithful clients. 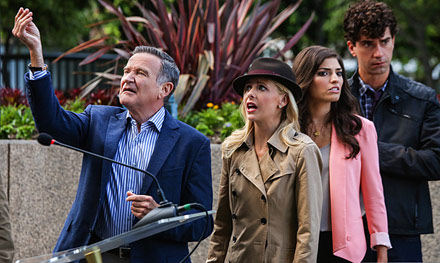 That’s similar to what Williams does here to woo back once-faithful fans like me. His manic improvisations have the old zing, and Gellar’s exasperated Sydney is the perfect foil.

A miracle has occurred: I’m interested in a whole season’s worth of Robin Williams.

Terry (Maggie Lawson) is a former star pitcher with a young son (Griffin Gluck) who has no talent for baseball. She signs on to manage his Little League team, populated by all manner of misfits. The sexist men in town look askance at a female manager, but that only stokes Terry’s competitive fire.

Sound like another Bad News Bears? It might have been but for one ingredient: Terry’s gruff father (James Caan), a former Major League pitcher known as the Cannon. The Cannon rode Terry hard as a kid, giving her hell on and off the field. He’s still riding her hard, and he’s just as merciless with his grandson.

Caan makes this character as mean as possible within the confines of a comedy. It’s a risky performance, but it pays off. The relationship between Terry and her dad is more complicated than what you’d find in the average sitcom, resulting in edgier humor.
You have to respect a baseball series with the guts to throw a few curveballs.

This new drama is tastefully filmed and acted. But something is missing, and it’s hard to say what. Sara (Hannah Ware) is a married woman who meets Jack (Stuart Townsend), a married man. Though both are basically happy with their affluent lives in Chicago, they find themselves attracted to one another. Cue shy smiles and coy glances, followed by guilty sex. You keep waiting for something more significant to happen, but the plot doesn’t add up to much. Betrayal really is about little more than two blandly good-looking people having a bland affair.

A sweet goofball named Carter (Chris Smith) breaks up with his girlfriend, after which his life falls apart. He winds up in an apartment complex in the middle of nowhere – Tarzana, on the outskirts of L.A. – to start over again. There he meets three silly older dudes (Tony Shalhoub, Kal Penn, Jerry O’Connell) who’ve been around the block with women. They’re happy to impart their wisdom, despite the fact that they’ve all screwed up their own relationships.

We Are Men could have been just another male-bonding sitcom engineered to drape beer ads around. But it’s better than that, thanks to the cast’s comic skill and the writers’ keen sense of the pathetic. Carter falls in love with the silly older dudes, and you find yourself falling in love with them, too. Maybe Tarzana won’t be such a bad place to hang out after all.