John Raatz, who founded Global Alliance for Transformational Entertainment, was interviewed by Tanell Pretorius in 2013.

Can you tell me more about your non-profit Global Alliance for Transformational Entertainment, or GATE?

JOHN RAATZ: I feel like there are lots of people in mainstream entertainment and media who are themselves transformational oriented. I call them closet transformationalists, because they don’t really speak much about it publicly, or with their peers, and yet I know from personal experience that there are many people in that way. They can also be called cultural creatives. A cultural creative is somebody who does some sort of spiritual practice, such as meditation. They probably follow a healthy lifestyle, are probably at ease in nature, pro women’s rights, pro children’s rights, pro peace, have a deep concern for the environment, listen to eclectic music, and tend to be more liberal in their political views.

The institute of Noetic Sciences did a study around 1999 and discovered that one in four Americans is a cultural creative and the number has grown since. Cultural creatives are a very potent force in the world; they are actually at the leading edge of positive change in the world.

Many of them work in the art, entertainment, and media fields. Through GATE and through our other work, we bridge that gap for them to become more comfortable in this milieu. A couple of weeks ago, we started a new GATE program, called The Better You, Gate, New Mind Dialogues.

Better You is Jim Carrey’s private foundation. The dialogues are a series of private monthly events at Jim’s home. We have a couple of other programs, of which one is The GATE Sharing Circle, which is meant to be a kind of support group for professionals in entertainment and media who are experiencing a personal or professional challenge and this gives them the opportunity in a very safe environment to meet their peers and to have that kind of conversation facilitated. 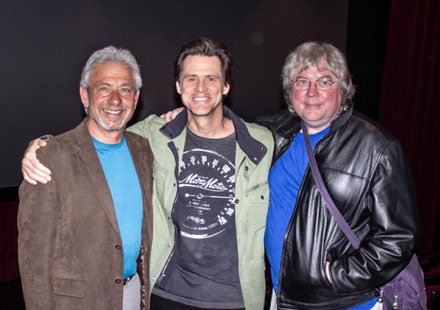 What is Transformational Entertainment?

I think that everybody should have their unmediated relationship with the meaning of transformation to them, inwardly and outwardly. I think they should discover what that means for them.

What part does Transformational Entertainment play in Hollywood?

How do you think Transformational Content can become more prominent in Hollywood?

Hollywood is chastised for gratuitous violence and other things, and that may be true, but Hollywood has also given the world so many uplifting moments in film, in television, and in the arts. There are plenty of people there who would like to do more of that, but the opportunities are not necessarily there because there is a disconnect to the ability of that kind of content to produce dollars, which is the bottom line in Hollywood.

If Hollywood could understand that many of the films that they have already produced, and that have made tens of millions or hundreds of millions of dollars, are transformational films; and that there are people out there, the cultural creatives worldwide, who are hungry for more content like that, I think a strong case could be made to help them produce it.  At GATE we have an expression, “The audience is ready.” There just needs to be more that is created from that intention, from that consciousness. The works imbued with that consciousness and intention would have such a huge impact on our culture in terms of media.

We need to define what we mean by news. Right now the definition of news tends to be framed according to a set of values that journalists learn in J-school. Those values tend to be conflict, controversy, celebrity, novelty that is generally characterized by the phrase, “If it bleeds it leads.” Of course, the news organizations will tell you that this is what we want, but I say it is what they have conditioned us to want. There is no way to be right or wrong about it, it just is, but we can try to build a strong case that people would be open to other kinds of content if it was presented to them. In fact, they have proven they are open by the types of movies they go to. Like movies that almost didn’t get made, like The Blind Side—it almost didn’t get made, and look at the impact that it had.

What do you see the role is of a small community like Fairfield or a program like the David Lynch MA in Film in creating this change?

Number one, energetically it is imprinting consciousness, and whenever you imprint consciousness, the field of infinite correlation, it affects everything. So it’s not a small endeavor as it might appear to be, but rather it produces a giant effect. I also feel that when an accredited institution such as Maharishi University of Management gives permission for that sort of program it also sets up the positive environment for other such programs to take shape at other colleges and universities around the world.

What is your involvement in the program?

For the next couple of days I will be leading a workshop in my particular specialty, which is how to market your transformational content. Many times creators use all of their heart, and soul, and mind, and consciousness, and money in the creation of their product. And they don’t know how to bring it to the market. They don’t necessarily know how the professional entertainment and media communities function. There is a big gap within the entertainment community. A schism between the creative and the business people and it has gotten wider and wider over time.

It is within that schism that there is incredible dysfunction. Artists have always pointed in the direction of more and said to us, “Look at that, consider this, here is what you can be.” They have always led the way and somehow they are getting more of a back seat position. I would like to see that reversed. I would at least like there to be a healthy partnership between the business and the creators.