Quay Thomas has just released his second album, The Highway.

Local blues musician Quay Thomas, who grew up in Fairfield and Pella, is passionate about launching a music career for himself. Currently in town on fall break from Berklee College of Music in Boston, Quay is the 18-year-old son of Cindy Schaus and Gus Schaus.

In September, Quay performed at the Burlington Blues and Barbecue weekend, and on November 9 he’ll open for Peter Karp and Sue Foley at the Fairfield Best Western. We caught up with Quay in early October and asked him about his developing music career and his newly released second album.

Last January you opened for international blues star Samantha Fish in Fairfield. What was it like to play for a hometown crowd?
It was a great opportunity. That was actually the biggest show I’ve done so far. It was a lot of fun and everybody came to help support me.

Was there a moment when you knew you wanted to be a musician?
About two years ago, I went to an Eddie Turner concert in Morning Star Studio on the square. At the time I was playing guitar, but it was just a hobby. When I saw him play, I thought, wow, I want to do that for a living! So from then on I’ve been taking steps toward that. I don’t see myself doing anything else—I really want to play music. 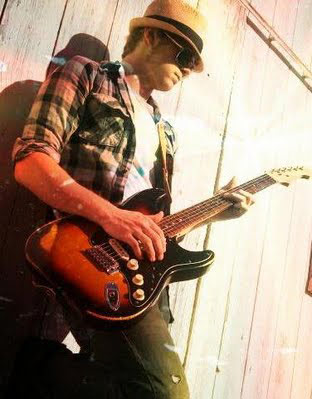 Did you always play an instrument?
I grew up playing a lot of sports, but around 12, I started getting into music and had this feeling that I’d like to play guitar. Then I found my first guitar at the local guitar shop in Pella. It was blue-stained wood and it just caught my eye.

What sort of music you were drawn to?
When I started playing guitar, people were saying, you should check out Jimi Hendrix—he’s a great guitar player. At the time I had no idea who he was. I had just listened to classic rock, like Aerosmith and Guns N’ Roses, stuff like that. And then I started listening to Jimi Hendrix and found I really liked his calmer, bluesier stuff. I regressed from there and got into earlier music like Muddy Waters and Son House, and then I went to the way-old blues, and then B.B. King.

What is it about the blues that draws you to it?
It’s a really expressive style, and I could communicate what I was feeling way better through blues than with anything else. And you can communicate really well with the musicians that you’re jamming with, because it’s such an open, expressive genre. When I’m up there playing, it’s like having a conversation with my band.

Do you remember the first album you bought?
I would say it was B.B. King’s Live at the Regal—I got it on iTunes. It will probably always be one of my favorite albums.

You started Berklee last summer. What was it like, and what did you get out of it?
Oh man, I’m a totally changed musician. I was able to hone in my abilities for songwriting, for recording my own stuff, and for performing live.

How do you come up with ideas for songs?
I just plug in my guitar or I’ll bust out an acoustic, and I’ll start messing around. When I stumble upon a riff that sounds really cool or a chord progression that’s really interesting, from there the song kind of unfolds itself. Then I’ll write the lyrics on top of it. I try to write the lyrics that really match the emotion of the chord progression.

This must be so exciting for you. You’re only 18 and you’ve got this whole world ahead of you.
It is, it’s really cool because everything’s starting to fall into place. I’m about to release a new album, my second album, The Highway, and I’m getting more gig opportunities. 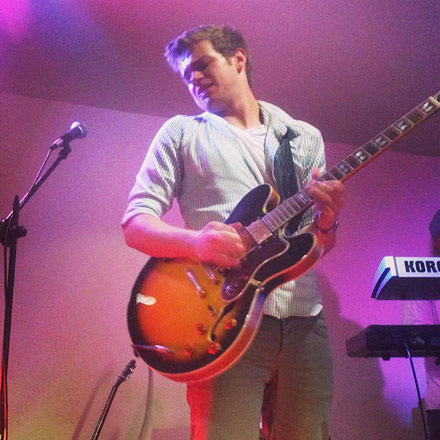 Where do you see yourself in the future? Can you see yourself in a place with a bigger musical community, like New York, the West Coast, or Nashville?
I could, but I also think the Midwest is pretty surprising as far as supportiveness goes. I can see myself branching out to places like Chicago or Minneapolis, because my roots are here, and there are a lot of people that would really help out. But depending on how my next semester goes at Berklee, I could see myself focusing and staying on the East Coast.

There’s a lot happening in Chicago. On the way to Boston for Berklee, we stopped in Chicago and went to a little blues bar called Kingston Mines. It’s so undercover—it’s just a door‚ no signs. I was actually able to play that night. At 8 p.m., it was just me and my Dad there, but by 10:00 there were 300 people shoulder to shoulder. It was all about the blues and it was fantastic!

If you could play with anyone, who would it be?
I would have to say the blues legends. I’d say my top three would be B.B. King, Eric Clapton, and Buddy Guy.

Anything else you’d like to say about your music?
This next album is slightly different from what I’ve done previously, but it’s still me. There’s a couple songs that are light blues, happy blues, but then there’s more of a contemporary rock feeling for the album. I’m verging away from blues just a little bit on this one, but this album feels more a part of me than the last one. This one is more about finding myself as a songwriter and musician.

So we have to ask: do you ever watch American Idol or think about competing in one of those vocal competition shows?
I watch The Voice a lot, and yeah, I have thought about trying that. I’d like to strengthen my voice a little more and then I might consider it.

Quay’s new CD, The Highway, is available on iTunes and Amazon.

Our Dog Blue: How Our Adopted Blue Heeler Became One of the Family