My brother Garrett met Blue in the summer of 1996. He would ride his bike to visit her at Noah’s Ark Animal Shelter in Fairfield and spend hours talking to her, promising to give her a good home and a good life. Up until then, Blue had only known a life of pain and disappointment, surviving abuse and abandonment. She was living at Noah’s Ark after being found almost dead in a ditch near Ottumwa.

Garrett was 13 and she was a two-year-old Australian Blue Heeler mix; he knew they were the perfect match. Our parents had recently divorced, so when Garrett adopted Blue, he brought her to live at my dad’s house. Despite Blue’s initial reservations around men, she soon warmed to the three of us. The countless hours Garrett and Blue spent hiking in the woods and trails around Fairfield were a form of therapy for both of them, but we had no idea what an important member of our family Blue would become.

After I graduated from high school in 2000, my dad was ready for a change. He moved with Garrett and Blue to Tucson, Arizona. 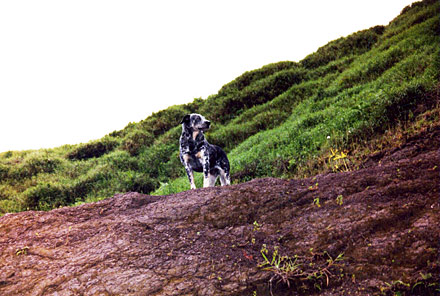 Blue needed to learn a few new things about hiking in a desert environment. Since Tucson has rattlesnakes in abundance, my dad enrolled her in rattlesnake school. Yes, that’s a real thing. Dogs are introduced to de-fanged western diamondback rattlesnakes that shake their rattles and strike out. The dogs are then instructed to be afraid of the snakes so they are not bitten in real-world situations.

Blue passed with flying colors and thereafter spent many days and nights exploring the washes and canyons around Tucson with Garrett. A herding dog by nature, she would run off after wild desert boars, called javelinas, and attempt to bite their heels as if they were domestic cattle. Javelinas are extremely dangerous, but Blue thought they were her toys.

Whether camping in Mexico, hiking to the top of Mt. Lemon, or rushing home to beat a flash flood, Blue never left my dad or Garrett’s side.

After two years in Tucson, my dad, Garrett, and Blue moved again, this time to a mountain cabin in Bozeman, Montana—with bigger sky, bigger mountains, and bigger wildlife. Blue regularly chased turkey, deer, moose, and even black bear out of the yard. Though the geography changed, one thing remained constant: Garrett and Blue hiking in the woods, side by side, exploring and strengthening their bond. 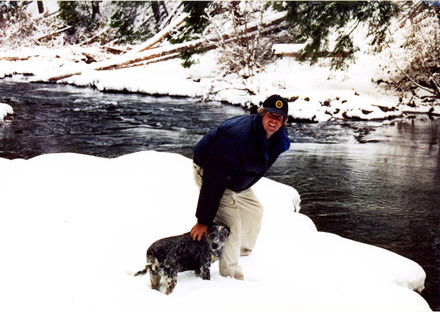 Kim Strubell with Blue in Montana.

After six months in Montana, Blue started to slow down more than was normal for an eight-year-old Blue Heeler. She had trouble walking and was beginning to lose control of bodily functions. My dad took her to the vet, but they could not determine what was wrong with her. Needless to say, my dad and Garrett were beside themselves: their girl was dying and there were no solutions. Another vet finally made a breakthrough: Blue had been harboring heartworms since she left Iowa. By the time they were discovered, three large ones were constricting her heart. Everyone recommended putting her down, since the odds of survival were so low. But after researching online, I found that full recovery was possible with the right care and time. I told my dad if any dog could do it, it would be Blue. She was nothing if not tough.

Throughout the long recovery process, my dad stayed devoted to Blue’s care—she had won his heart, too. It’s hard to quantify the effect it had on them when she began to walk again, but it’s safe to say they were all better for having each other. Blue brought love and commitment to their lives each day.

Eventually, Blue became healthy enough to accompany my dad on car trips to Yellowstone. Her strength began to return and she was moving around much more easily.

Recovery in Iowa City and Another Move

Then my dad opted for an even bigger change: a move to Panama. We made arrangements for Blue to come live with me for three months in Iowa City while he squared things away. As soon as she arrived, we began training. I wanted to return her to health so she could start walking with Garrett again. I should explain that hiking with Garrett is not a casual stroll—it’s a 15-mile trek through uncut brush—and Blue needed to be ready. We started jogging together in the mornings before I went to class, slowly at first. She was carrying an incredible amount of weight and stress from her treatment. Over a few weeks, we started to pick up the pace, and one day she ran out in front of me faster than I could keep up.

Nearly two years after my dad was told to put our dog down, he moved Blue to the jungles of Panama, in the mountain town of Boquete. Garrett, Blue, and I climbed active volcanos, tracked jaguars through the jungle, and swam in the Caribbean Sea and Pacific Ocean.

After I returned to the States, they moved south to the Darian Gap, a mostly unmapped portion of lush jungle south of Panama City. My dad, Garrett, and Blue lived in a village with native Embera Indians. Initially, they feared Blue—until they discovered how much easier she made it to find and hunt boar. Every morning at sunrise, the native hunters would come around my Dad’s hut and wake him up with “Blued, Blued.” They never really got her name right, but they loved having her around all the same.

Blue, my Dad, and Garrett moved several more times before returning to Fairfield four years ago. Blue had visited three countries and over 35 states, living a life so full of experience and adventure, most people would be proud to tell her story as their own. She stood on the edge of the Grand Canyon, swam in the Mississippi, barked at bison herds in Wyoming, chased bear and moose in Montana, crashed through the snow at Crater Lake, lapped water from streams of the Great Smokey Mountains, sunbathed in the Everglades, and took a boat ride on the Panama Canal.

But most importantly, she gave something to my family far greater than we could ever give back. She never gave up and she never stopped trying to be our companion. 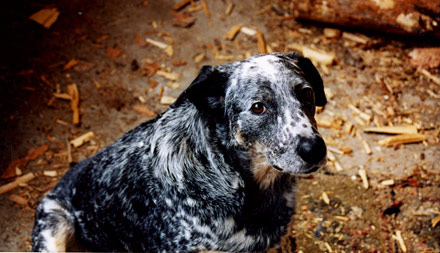 Blue had a tough early start, but once she was adopted into the Strubell family, she lived a long and rich life, devoted to her people.

Blue passed away on August 25, 2013. We believe she was 19 years old. I think she felt a sense of debt to my brother for choosing her at Noah’s Ark so many summers ago. Garrett kept his promise to Blue by giving her a good home and a good life. In return, she gave us more than we could have ever hoped for.

For over 27 years Noah’s Ark Animal Foundation has offered loving care to homeless and abandoned cats and dogs. Even if you aren’t ready to adopt, stop by to say hello!

For the past several years Noahs Ark Animal Foundation has been able to accept and place every adoptable dog scheduled for euthanasia in Fairfield. Noah’s Ark is a 501(c)(3) tax exempt, charitable, nonprofit organization. Your donations make it possible for us to continue our work.