Dick Smith and daughter Lori Schaefer-Weaton in the offices of Agri-Industrial Plastics.

In 1978, when 10-year-old Lori Schaefer-Weaton joined her brother, mother, and cousin on the very first assembly line in her father Dick Smith’s new business, the idea that she might one day run Agri-Industrial Plastics did not occur to her. “I think at age 10 I still thought I was going to be a veterinarian. Either that or an American Idol, had it existed,” laughs Lori, who became company president just last month.

The aspiring vet might have been surprised to know that her future self would one day step into her father’s shoes, but grown-up Lori seems very happy where she’s ended up. It’s a trait shared by everyone I interviewed who now works in a family business, whether they always wanted to work there or not.

Co-workers You Can Count On

When Dick Smith started Agri-Industrial Plastics 35 years ago, after the plastic blow-molding company he worked for went bankrupt, he probably wasn’t thinking in terms of starting a family business. As his daughter tells it, “He kind of had to start his own company out of necessity. Quite honestly, I don’t think it was ever a master plan. I think he just said, ‘Hey, I know how to do this. I’ve set it up for someone else. Maybe I can set it up for myself.’ And so with that and a second mortgage on our house . . . he bought a used machine, rented 10,000 square feet, and just started it.”

Since then, the company has grown from 4 employees and 2 customers to 175 employees and 40 customers. Lori joined the company in 2004. She has found working with her father especially rewarding, with shared values making the work-family relationship possible.

“My dad and I have a great working relationship—we keep it very professional. . . .  He’s an engineer by trade and  I’m a finance person by trade, so we have a lot of differences. But at the core, I think what allows us to work together is that our values are the same, our ethics are the same . . . that’s what really keeps you all going in the same direction.”

For Cory Lindberg, who works with his uncle Brett and brother Chad in his dad Bruce’s chiropractic clinics, being able to rely on his co-workers is a big part of why he loves being in business with his family. “You can trust family,” he says. “Family is always there to help you out when you need it. If you have something going on with your kids or in your own personal life, they’re real understanding and are there to help you out.” 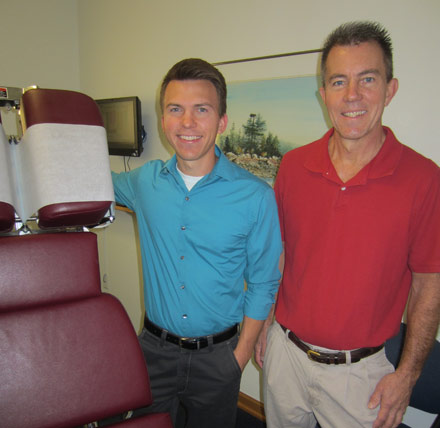 Cory Lindberg with his dad Bruce

Meghan Dowd, who owns the artisan beverage company Shaktea Kombucha with her brother Jack and mother Deb, also loves working with her family. “We are able to share the different aspects of the business, creating variety for all of us, and allowing the flexibility to support each other when someone needs to take time away.” The downside? The Dowds are so busy working together, they have no time to vacation with each other!

The Benefits of Leaving

As a child, Cory Lindberg was sure that he wanted to be a chiropractor like his dad Bruce Lindberg, who owns the Ottumwa Chiropractic Clinic and Lindberg Chiropractic in Fairfield. But in college Cory changed his mind and studied psychology for a while. Eventually, though, he chose chiropractic, knowing that it would make him happy.

For Lori Schaefer-Weaton, the decision was not as simple. Although Lori soon outgrew her animal-doctor dreams, it took her longer to decide she wanted to work for her father. “I went to college in Valparaiso, Indiana, and after college I immediately moved to Chicago. I was not necessarily in a hurry to come back to small-town Iowa.”

It wasn’t until she married and had kids that she considered moving back. “Six hours seemed a little bit too far away from family and grandparents, and Fairfield at that point seemed like a really nice place to raise kids.”

Lori strongly believes that kids who want to work in the family business should strike out on their own first. “You want to go out and have your own experiences professionally so you have something to bring to the table when you come back,” she says. “In a small company you’re not going to get the kind of training that you would at a GE or a Principal Insurance. So I think the best thing you can do is go stand on your own, earn your own stripes, and then come back and have something to offer.”

In fact, having something to offer is crucial to the continued success of the business. “No matter who your dad is, no matter if you own shares or not, you’d better do your job, and you’d better do it well,” Lori says, “because in this day and age things are too competitive to have low performers.”

Even experience that does not directly relate to the family business can be a benefit. Meghan Dowd, who worked in LA as a writer’s assistant and script coordinator on a scripted TV drama before returning to Fairfield, finds that the creativity and project-coordinating skills she developed are real assets when it comes to taking a business project to completion.

And the best part is that she is using her skills in her family’s business where she has creative control. “I’ve worked on a lot of different people’s projects, and at some point you start to say, ‘Oh, I wouldn’t have written it that way,’ or ‘That’s a little cliché.’ This really gives me a chance to just dive in and not compromise on any of our ideals or values.”

Connection to a Larger Family: The Community

Meghan also hopes growing up in a family-owned business will teach her son some important lessons. “I think it’s very valuable for children and young adults to learn how to take an idea and develop it into something tangible that fulfills a service or need in the community. Having a family business is a way for our children or grandchildren to plug in early and develop a work ethic.” 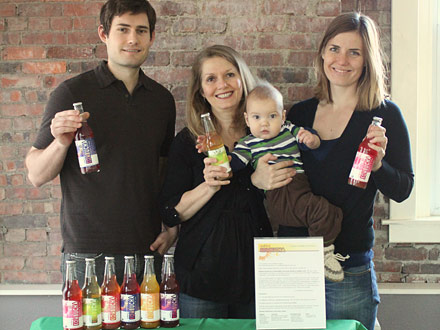 The Dowd family works together to promote their new business, Shaktea Kombucha.

And when a family decides to go into business together, it can have a positive impact not only on the family, but the whole community. Since joining Agri-Industrial Plastics in 2004, Lori has embraced Agri’s role in the community, taking seriously the need to create the next generation of skilled workers. “If kids who go to Fairfield High School think there are no opportunities in Fairfield, they won’t move back,” she points out. Her family’s business supports the engineering curriculum at the local high school and also the career academy, which lets kids take courses for college credit. She has also taken on the role of president of the Fairfield Economic Development Association.

“People who have family businesses stay connected to the community,” Lori explains. “They’ve seen their parents give back. They’ve seen their parents give time and money, and I think that’s something that’s learned to a large extent. . . . Fairfield is very, very lucky to have family companies that want to stay here, that aren’t in it for the money.”

Iowa’s towns are indeed lucky when they are home to a successful family business that is invested in its community, since economic success tends to lead to more of the same. On a small scale, Shaktea has found success through sales at established local restaurants and markets, while on a larger scale Agri-Industrial Plastics’ presence in Fairfield has led directly to the addition of other companies like TrafFix Devices and H&H Molding, leading to more employment opportunities. Residents in turn need services like those offered by Cory Lindberg’s family.

State director of the Small Business Development Center Jim Heckman would agree. “[Small businesses] play a huge role not only at the local and regional level but also the state level.” Jim believes that even a business like Bruce Lindberg’s, which employs two full-time and two part-time employees, can make a significant difference in its community. Jim feels very strongly that the state needs to recognize and support the small businesses that are so crucial to Iowa’s economic well-being.

Says Lori, “Economic development in large part is about supporting existing businesses and helping those businesses grow. You know, everybody wants to think it’s about recruiting the next great business to town—it certainly is partly about that—but if you look at where our real economic growth comes from, it’s expanding the businesses that we have here today…. It’s all about the connections.”

And what about the next generation? Will they be following in their parents’ footsteps? Cory doesn’t seem too concerned. “I have four boys and I’d be happy if any of them chose chiropractic. I’m not going to push it on them.”

Lori is also not worried about either of her kids joining the family business. “I don’t obsess over that, honestly. I hope they’re healthy and happy and they do something they love, so they love going to work.”

And while Lori suspects that at least one of her daughters may have gotten Dick Smith’s engineering genes, that daughter has other plans. Her daughter, Lori says, is planning to be a vet.

Heckman is state director of Iowa’s Small Business Development Center, which helps small business owners become better at business and assists them in gaining access to capital. “You’d be amazed to discover what small businesses are manufacturing and exporting. Iowa businesses, and I’m talking about not farms—they sell all across the country and all across the world.”

How easy is it to start a small business? As easy as you want it to be, says Heckman. “[It] depends on perseverance. Entrepreneurship is an attitude.” If you won’t take no for an answer or give up when things don’t go well the first time, you will succeed.