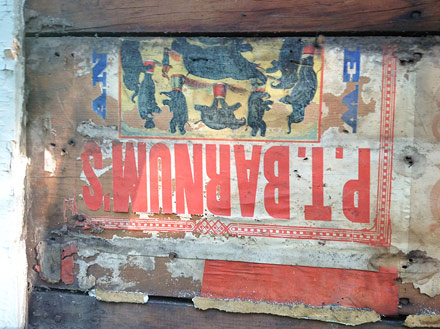 This upside down circus-poster fragment was revealed in a room upstairs.

In 2004, Mary Helen and John Stefaniak became the fourth family to own the historic Louis Englert house in Iowa City. This is the fourth in a series about the renovation of their 157-year-old home.

It’s hard to imagine how excited people around here must have been the first time the circus came to Iowa City. It was on a Monday in September, two days after the show in Des Moines, one day before Davenport. There must have been a crowd to meet the train—as many as 50 railroad cars’ worth, an 1877 circus-route book tells us. One hundred and seventeen horses! Twenty-five animal cages holding lions and tigers and at least one bear, plus a live hippopotamus! Whether P. T. Barnum called it his Great Traveling Exposition and World’s Fair, or simply the Greatest Show on Earth, people must have lined up to watch the elephants and camels being led from the train. How many of them had ever seen an elephant or a camel before the circus came to town? 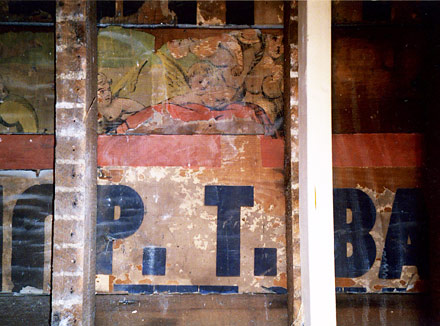 More boards with circus posters were revealed under the plaster in the upstairs bedroom.

They must have been at least as astonished as we were when, in the course of tearing out the walls of an upstairs bedroom in our former stagecoach inn, our daughter Liz spied the first signs of what lay hidden behind the plaster. There were words on the boards back there, she said—and pictures! “Come and see!” she called to me in the next bedroom. I squeezed through a pair of hand-hewn studs and soon we were wielding our crowbars side by side, exclaiming to one another in mask-muffled voices as chunks of plaster fell, revealing pictures of—what? Was that a foot? And perhaps—a barrel? A pair of bare legs? In dainty boots? A horse’s—tail? The dust rose and then settled around us. Finally, we stepped back and took in what we had uncovered.

The entire wall of the bedroom—an exterior wall made up of 12-inch boards formerly covered by lath and plaster—was papered with circus posters. 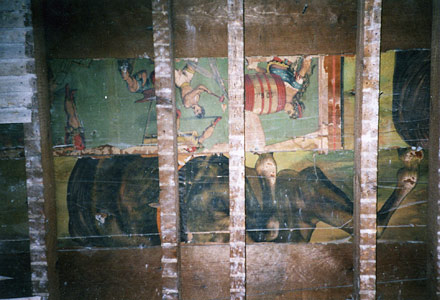 They were in strips and pieces as wide as the boards they were pasted to, some words and images right side up, others upside down, but there was no mistaking them. Along with “The Greatest Show on Earth,” and “Well worth going 100 miles to see,” we had uncovered the chests and pounding hooves of horses whose upper halves, we cleverly theorized, were on boards that faced the outside, under the clapboard siding. Balancing acts and trapeze artists appeared here and there, in whole and in part, and in various sizes. A woman in buttoned boots and a scandalously short skirt seemed to be lifting a barrel with her teeth. (This, we learned later, was “Millie DeGranville, the Woman with the Iron Jaw.”) In another picture, on another board, she lay back with an anvil resting on her midsection, while a shirtless man with a handlebar mustache hoisted a sledgehammer over the anvil, as if in mid-strike. (Apparently, she had an Iron Stomach, too.)

In other rooms, we found lettering that spelled out things like “P. T. Barnum,” “Music Chariot,” and “Iowa City,” “Saturday,” “Sept 8.” A poster fragment in the bathroom promised “A Stupendous Bear” and “The Only Living Hippopotamus” in America, billed as a “Behemoth” “worth $20,000.” In a corner of the master-bedroom-to-be, a pair of bare-breasted ladies posed demurely. 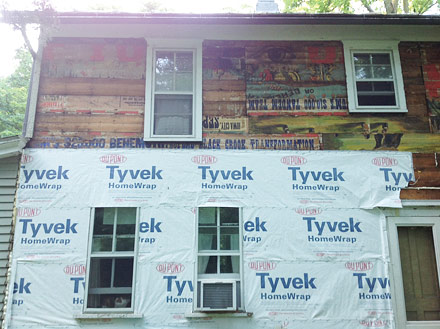 More circus posters were uncovered at the back of the house.

It was recycling, mid-19th-century style: a roadside barn or mill dismantled, the boards once papered to advertise the circus put into service a second time.

A closer look at the posters on the house.

My first impulse was to call all our friends to come and see—maybe the local paper and the historical society, too. Circus posters brought to light after 150 years seemed like news and history. Then I remembered the deadline on our construction loan. We had a lot more interior to demolish and haul away before our contractor could move on to plumbing, wiring, insulation, walls, etc. We called a few friends and took plenty of pictures. Then we covered all the poster-bearing walls with heavy-duty kraft paper, ready for the insulation man.

But we weren’t through with those circus posters, or maybe they weren’t through with us. In the summer of 2007, while I was looking into camels for The Cailiffs, we made a research stop at the Circus World Museum in Baraboo, Wisconsin. The very nice people at the library there were fascinated by our story of recycled boards and circus posters. They helped us hunt through files and catalogues for a poster that matched the pieces we had discovered in our house. No luck there, but when it came to finding out what year P. T. Barnum played in Iowa City on the “Saturday, Sept 8” our poster fragments advertised, all we had to do was look at a few early route books, the librarian said. Circuses kept daily journals that listed not only dates and places but how many miles were traveled on a given day, what the weather was like, and whether any “mishaps”—like the “Season ended by fire at Hippotheatron on December 24,” 1872—had occurred.

We told the librarian that we would need to see route books from the mid-1850s. Our house was a former stagecoach inn, and, it was widely believed, a stop on the Underground Railroad. In fact, I had recently read in Nineteenth Century Architecture in Iowa City by Margaret Keyes that abolitionist John Brown might have stopped at the inn. Local historian Irving Weber reported a construction date of 1857.

Suddenly, the librarian looked doubtful. “Well,” he said, “I can see a few problems there.”

We turned to the route books. In 1871, P. T. Barnum and his newly traveling circus hadn’t ventured any farther west than western New York state. In 1872, emboldened perhaps by the successes of the previous season, the circus had crossed the mighty Mississippi and played dozens of towns in Missouri and Iowa and even Kansas. The first P. T. Barnum show in Iowa City was on Monday, September 9, 1872. The next one was in August 1875. We finally found our “Saturday, Sept 8” in the route book for 1877. (The weather was fair that day—a nice break, I’m sure, after rain in Des Moines.) We couldn’t help noticing that 1877 was more than a decade after the Civil War. A little too late for the Underground Railroad. Maybe too late for a stagecoach stop.

We left the Circus World Museum feeling bereft. If part of the house was made of boards advertising a show in 1877, did that mean all the long-held lore about our former stagecoach inn was, in a word, incorrect? Were we all living proof that, as P. T. Barnum himself reportedly said, “There’s a sucker born every minute”?

Find out in Part V.

Lily Tomlin: One Woman and a Hoard of Characters | The Actress-Comedian Appears November 16 in Riverside