The Southeast Iowa Symphony Orchestra will perform Lemony Snicket’s The Composer is Dead.

For their annual Kidsymphony! Concert, the Southeast Iowa Symphony Orchestra will give three performances of Lemony Snicket’s The Composer is Dead on Saturday, November 9. The shows will take place at the following times and places: 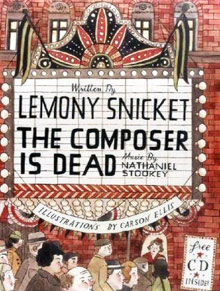 A musical whodunit that introduces kids to the orchestra.

Based on Lemony Snicket’s hilarious children’s story, The Composer is Dead, this musical whodunit follows a determined inspector as he interviews all the instruments in the orchestra as suspects in a murder mystery. The music was written by Nathaniel Stookey and was originally commissioned by the San Francisco Symphony Orchestra. Like Peter and the Wolf before it, this orchestral work is designed to introduce young children to all the instruments in the orchestra. Percussion instruments will be handed out at the door and kids will get a chance to play along with the music.

Southeast Iowa Orchestra has been performing their annual Kidsymphony concert since the early 1990s, when Robert McConnell became the music director. The first performance was called "Old McConnell’s Farm" since Robert McConnell, in addition to being a terrific conductor, is also a farmer.

Chuck Mitchell: An Extraordinary Life of "Why Not?"