Janet Schlapkohl shares stories of her Midwestern childhood in this one-woman show.

Get your tickets now for Coming of Age in Chore Boots, Janet Schlapkohl’s one-woman show. The writer, director, and frequent Walking the Wire performer shares her memories of growing up in the Midwest. Stories both hilarious and poignant emerge—from the local characters of the Wapsi Women’s Club, back-to-the-landers, and early Lamaze advocates, to Vietnam and the farm crisis. This show is directed by Tim Budd.

Schlapkohl says about the play, “It celebrates the survival of humor and good nature found in the silence and pauses in conversation of the people who experienced the Farm Crisis. People are drawn to these stories like they’re drawn to old photographs of farming. They remember the idiosyncrasies and the effort with a great fondness.” 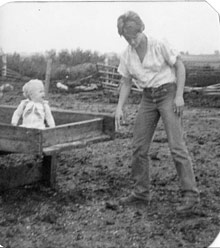 Shows run at Riverside Theatre in Iowa City, November 29 through December 8. There will be a post-performance talk on Sunday, December 1. Tickets and information are available at riversidetheatre.org, or by calling the Riverside Theatre Box Office, (319) 338-7672.