The multitalented Will Oldham is known for his work in film, videos, and music. At age 17 he played a teen preacher in John Sayles’ 1987 movie Matawan and more recently has acted in such notable flicks as Old Joy (2006), Wendy and Lisa (2008), Jackass 3D (2010), and New Jerusalem (2011). Oldham’s videos have received critically positive responses and his most current ones have premiered on the prestigious New York Times’ website. Oldham himself starred alongside Zach Galifianakis in the alternate music video for Kanye West’s “Can’t Tell Me Nothing.”

But most people recognize Oldham for his music, even though he rarely records under his own name. He’s used the monikers Oldham, Palace Brothers, Palace Music, Palace Songs, Palace, Bonnie Billy, and Bonnie “Prince” Billy. These days he mostly goes by Bonnie “Prince” Billy, the name he will appear under at the Englert Theatre in Iowa City on December 15. Oldham said he chooses different names to represent the separate styles and bands he records under, not to confuse the audience as much as illuminate what they should expect to hear.

Speaking over the telephone from his Louisville, KY, home, Oldham said, “The audience is the boss. I can’t tell them what to expect.” But in Iowa City, audiences can expect that he’ll perform solo. He started performing by himself again following several years of playing in a group. “After the intensity of navigating other folks’ realities, it seemed like a good time to go out and put myself in the cauldron without the protections or distractions of others,” Oldham said in a slow Southern voice. He spoke in full sentences and reflected upon his thoughts before articulating them.

Oldham has released more than a dozen studio albums and several EPs, in addition to compilations and live recordings. He has mixed feelings about whether personal songs can be delivered more effectively with a band or more powerfully when stripped down. “When I was younger, I would have said the solo show. Now I find it fascinating how people work by themselves and with other musicians,” Oldham said. “At the end of the night is the only time you can judge. It may be a cliché, but every show is different.” 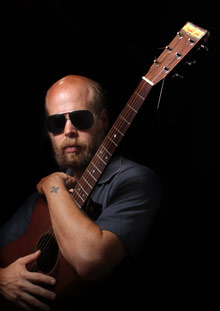 And so are Oldham’s recordings, which can vary from lo-fi rock to alt-country to folk to indie rock to new-age instrumental. He has collaborated with everyone from post-rock heroes Tortoise to the father of modern country, Johnny Cash.  “It’s a reflective time right now, so soon after Lou Reed’s death,” he said. “He kept his relationship to his music alive. I would have enjoyed working with him.” When asked about living artists he wanted to work with, Oldham surprisingly named English folksinger June Tabor. “I still harbor fantasies of performing with her. She is not a folk rocker, but a pure folk artist—something that could be called chamber folk.” He thinks the two of them share the same attitude towards tradition and modernity.

Oldham lived in Iowa City more than 20 years ago, when his girlfriend attended the University of Iowa. “I remember in the wintertime best,” he said. “The cold wind caused my eyes to water and then the water would freeze.” He paused and added, “Stay warm.”

Oldham is also an author. The New York Times began its review of his 2012 autobiography Will Oldham on Bonnie “Prince” Billy with the line “Will Oldham does not care for interviews.” This was the second time I had interviewed Oldham  and the opposite seemed to be the case. “I think it is important to do interviews before you tour to give audiences a sense of where you are at and who you are. I do not like interviews about a record because the person tries to simplify your work into something linear.” Oldham admitted to enjoying person-to-person contact and just talking to other writers.

He is also funny. Oldham compared God to certain carnal acts and body parts on a recent release (“There is no God”) in which the aphorism about God being love was taken to a physical level.

“I think the general rule is, or at least what I have been told, is that all stand-up comedians are closet musicians,” Oldham said. “I find I have such admiration for comedians, and that I am the mirror that proves the rule. My idols include George Burns and Edgar Bergan. Mortimer Snerd was my hero while growing up.”

Snerd was the secondary dummy employed by the ventriloquist Bergan, behind the better-known Charlie McCarthy. Hmm, Bonnie “Prince” Billy is the secondary persona behind variations on the Palace name for Oldham. Perhaps there is a connection here, but Oldham won’t comment on it. Snerd wasn’t noted for being particularly perceptive, even for a dummy. Oldham is content to treat the topic as a joke, and sly enough to pretend that maybe there is a connection.

Memories of Holidays Past | Googly Eyes and Stollen Dough