What are the odds of a black-and-white 1950s sitcom being funny in 2013? Extremely low – unless the sitcom is I Love Lucy. In the I Love Lucy Christmas Special (Friday, 7 p.m.), CBS offers us a holiday gift by airing two 1956 episodes, "The Christmas Episode" and "Lucy’s Italian Movie." The only concession to modern-day audiences is colorization. Otherwise, the acting, writing and staging are for the ages.

"The Christmas Episode" is of particular interest. It wasn’t included in the series’ decades of rebroadcasts and was thought to be lost until CBS rediscovered it in 1989. In other words, this is a TV gem you probably haven’t seen. 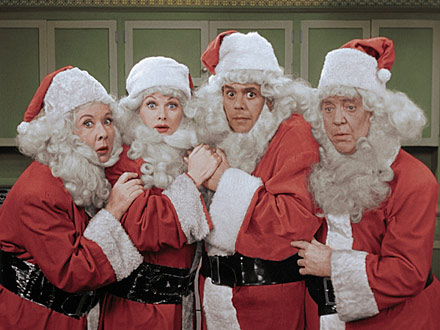 Lucy (Lucille Ball) and Ricky (Desi Arnaz) decorate a Christmas tree with their friends Fred (William Frawley) and Ethel (Vivian Vance) while reminiscing about life before their son was born. The reminiscences come in the form of clips from previous episodes — and I dare you not to laugh out loud at the one where Ricky, Fred and Ethel try to keep Lucy from singing (badly) in their barbershop quartet. Or the one where they do a practice run for getting Lucy to the hospital when she goes into labor. From the repartee to the double takes, the chemistry among these four comic pros is nothing short of astonishing.

I was also struck by the characters’ warmth and bonhomie. Though the apartment set looks flimsy by today’s standards, Lucy, Ricky, Fred and Ethel make it feel like home.

Mob Wives is like The Real Housewives with no legal or moral constraints. The reality series’ stars are romantically involved with New York gangsters and don’t give a damn what anybody thinks of their "lifestyle," as they call it. (Yes, murder and robbery are now a lifestyle choice.) They’re loud, foul-mouthed and combative. You got a problem with that?

I said, you got a problem with that?

In season four, Renee markets a clothing line called Mob Candy. New wives join the cast, including Alicia, whose husband has been indicted for racketeering, extortion and conspiracy to murder; she herself pleaded guilty to embezzlement. As always, though, the Mob Wife you can’t take your eyes off is Big Ang. She lives up to her name with impossibly big lips and big breasts, not to mention a big heart. Big Ang gives everyone the benefit of the doubt, including Alicia.

"I think Alicia’s a really good person," she says in her thick New Yawk accent.

Can an admitted embezzler be a good person? It is possible, at least for an hour a week on Thursdays.

"Christmas in Washington" —it’s kind of sad that TNT is saddled with that title for its annual holiday special. Many Americans are now repelled by the idea of Washington, D.C., given the government shutdown and other examples of dysfunction. "Christmas in Guantánamo Bay" is the only imaginable title that would earn lower ratings.

And it’s too bad, since stars Hugh Jackman, Anna Kendrick and Sheryl Crow will make this an enjoyable variety show. Is it too late for TNT to change the location and name to "Christmas in Washington State"?

Britney Spears is known for singing and scandals. For expressing herself verbally, not so much. Over the course of her career, we’ve learned that she’s deeply uncomfortable with self-reflection, so why devote 90 minutes to a so-called in-depth interview? E! asks Britney to bare her soul on the eve of her Las Vegas residency, but this is an entertainer much more adept at baring her body than her soul.

How about skipping the interview, sticking with footage of the singing and scandals, and keeping I Am Britney Jean to a brisk half-hour? I bet no one would complain — not even Britney herself.

With Girls, HBO became the go-to network for comic insights about young women in the 2010s. But Ja’mie: Private School Girl threatens to undermine its reputation. Australian writer-director-star Chris Lilley slaps on a wig to play a crude stereotype of a spoiled high school girl. Ja’mie obsesses on her looks, catfights with fellow students, and threatens suicide when her boyfriend drops her. The series is supposed to be a comedy, but Lilley’s writing is almost entirely humor-free. He seems to think the dialogue will automatically become funny if delivered by an adult man in schoolgirl drag. No such luck.

Worst of all, Ja’mie: Private School Girl has an undertone of hostility toward females. Hopefully the Girls season premiere on Jan. 12 will rinse this icky taste out of our mouths.