For 97 years the Hardacre Theater provided entertainment for the citizens of Tipton; first as an opera house and later as a movie theater.

Hardacre Theater in Tipton was the home of the Hardacre Film Festival for 16 years, bringing us an awesome assortment of independent films that would be otherwise hard to find in rural Iowa. It was a sad day for film buffs when it was announced that the 2013 festival would be the last. The rising costs of renting films as well as the prohibitive but necessary cost of upgrading to digital projection meant it was no longer financially feasible to keep the Hardacre open.

Fortunately, that doesn’t have to be the end of the story for the Hardacre Theater. The nonprofit Hardacre Theater Preservation Association (HTPA) is raising money to not only purchase the theater but renovate it and upgrade to digital technology. The HTPA launched a Indiegogo fundraising campaign at the end of December. The campaign’s goal is to raise $60,500 before January 30, 2014,
with the goal of purchasing the theater on Jan. 31, 2014. Phase 2, which will begin after the purchase, will involve raising funds to renovate and rehabilitate the theater.

The “Save the Hardacre” Indiegogo campaign is using a “flexible funding” option, meaning the campaign must reach its goal to receive the total funds donated. If the fundraising goal is not met, the HTPA will only receive 91 percent of the money raised.

“This is why it’s incredibly important to meet our fundraising goal of $60,500,” said Greg Brown, HTPA president. “While this is less severe than the all-or-nothing crowdfunding campaign we originally planned to use, meeting our goal will mean the difference between making the purchase deadline or failing to make it.”

To access the campaign, go to indiegogo.com and search for “Hardacre Theater” or find the link at the HTPA website at thehardacre.org. Donors can give via credit card. 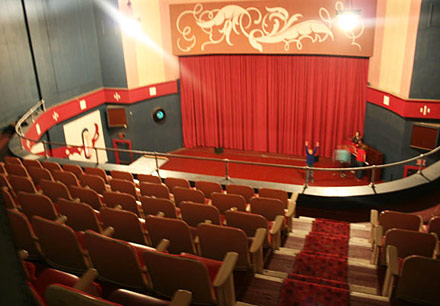 After purchasing the theater building, the HTPA plans to raise additional funds to renovate the theater and upgrade to digital projection.

The purchase price for the theater is its assessed value, $96,100. One donor has pledged a $40,000 matching donation toward the purchase price. The Indiegogo campaign is designed to raise the remaining amount, in addition to $4,400 in campaign fees.

Campaign donations are tax deductible, and donors can choose from a variety of donor rewards, depending on their level of giving. Those rewards include free tickets to post-renovation Hardacre movies, T-shirts and art prints of the theater designed by local artists, and invitations to the Hardacre’s post-renovation grand opening event.

For more information, go to thehardacre.org.