Children and parents—prepare to be delighted! Mermaid Theatre of Nova Scotia will visit the Coralville Center for the Performing Arts on Thursday, February 20, and Friday, February 21, with three performances of their signature production, The Very Hungry Caterpillar and Other Eric Carle Favourites. The engagement includes two sold-out school performances at 10:30 a.m. on February 20 and 21, and a public performance at 6:30 p.m. on Thursday, February 20. This one-hour production is recommended for ages three through second grade, and anyone who loves Eric Carle stories. The performance brings three of Carle’s beloved stories to life through the magic of black light and fanciful puppets.

The fifty-minute production includes three beloved stories: The Very Hungry Caterpillar, Little Cloud, and The Mixed-Up Chameleon. The Very Hungry Caterpillar follows the wonderful adventures of a very tiny and very hungry caterpillar as he eats his way through an amazing variety of foods on his path to becoming a beautiful butterfly.  High up in the sky, Little Cloud playfully transforms himself into various creatures, including a sheep, an airplane, a shark and more. The Mixed-Up Chameleon is bored with his life, sitting about predictably changing color all day. Following an adventurous trip to the zoo, he attempts to emulate the beautiful animals he sees before coming to the conclusion that there is value in his own unique self. 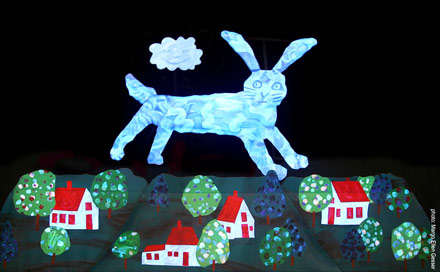 In Little Cloud a cloud playfully changes himself into various creatures.

The production was adapted, designed, and directed by Jim Morrow, with music by Steven Naylor and narration by Gordon Pinsent.

Tickets for the public performance are available online at coralvillearts.org, by phone at (319) 248-9370, and in person at the CCPA box office and the Coralville Recreation Center.