After aliens crash-land on Earth, the military herds them into a detention camp. They look just like humans — indeed, the gorgeous alien teenagers could easily be mistaken for stars of a CW series — but most Earthlings despise them. As an experiment in integration, the authorities allow seven alien kids to attend a normal high school. That leads to disaster, but it also allows the cute human girl Emery (Aimee Teegarden) to meet the hunky alien boy Roman (Matt Lanter). Cue the Romeo-and-Juliet romance, hinted at in the series’ title: Star-Crossed (Monday, 7 p.m., CW).

With its immigration subtext, Star-Crossed is less reminiscent of Shakespeare’s play than the Romeo and Juliet adaptation West Side Story. The aliens are ethnic types, misunderstood in their new land. Roman himself is the kind of smoldering misfit familiar from countless teen movies — an Extraterrestrial Without a Cause. But Lanter fits the role, and Star-Crossed proves itself a superior high school soap opera. The science fiction setting adds an appealing novelty, with futuristic gadgets and miraculous medicine. Plus, it’s hard to top Roman’s reaction on seeing Emery in peril:

"One of my hearts stopped beating for a minute!"

How exciting is it to watch a bunch of dudes catching fish? In the case of Wicked Tuna, extraordinarily exciting. These are Old Man and the Sea-type fishermen, in search of the elusive bluefin tuna in Gloucester, Mass. The fish are like floating money pots, with a single 500-pounder going for as much as $20,000. The reality series focuses on a handful of guys in small boats who pursue the tuna with old-fashioned rods and reels — a quest that can lead to great joy or great sorrow, depending on their luck.

As if the man-against-nature theme weren’t compelling enough, the fishermen also fiercely compete with each other. In the season premiere, they jockey to find the best fishing holes and catch the biggest tuna. "Karma, baby!" whiz-kid Tyler crows when he gets the better of a rival.

After you’ve experienced the high drama that goes into catching these fish, just imagine how thrilling it will be to eat your next tuna sandwich.

The problem with most reality series about L.A. socialites is that the stars are witless. That’s not the case with Dorothy Wang and Morgan Stewart, who banter their way through #RichKids of Beverly Hills at a mile a minute. Yes, they indulge themselves as extravagantly as any Kardashian, but they often do so ironically, with an edge of self-mockery. Dorothy is aware of how silly she is examining her latest selfie: "Do I look this bitchy in real life?" Morgan, checking her own selfie, matches Dorothy quip for quip: "Oh my God, I could do a Crest Whitestrip ad!" When’s the last time you met a quotable rich-kid reality subject?

I understand that some viewers might have a hard time enjoying an hour’s worth of shopping, clubbing, and more shopping. My advice is to take a cue from Dorothy and Morgan and enjoy it ironically. 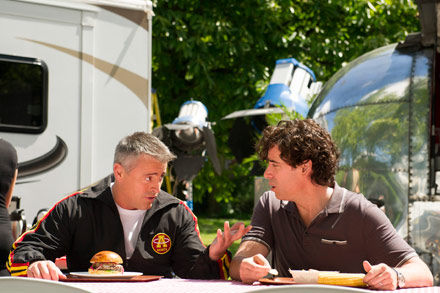 Matt LeBlanc as himself and Stephen Mangan as Sean Lincoln in EPISODES (Photo: Des Willie/SHOWTIME)

In its third season, Episodes is wreaking satirical destruction upon Hollywood. We see the industry through the eyes of two smart, sane British writers, Sean (Stephen Mangan) and Beverly (Tamsin Greig), who’ve been lured to L.A. to adapt their BAFTA-winning TV series for an American audience. One idiotic network decision leads to another, and soon their sophisticated creation is reduced to a hockey comedy called Pucks, starring Matt LeBlanc (playing himself). LeBlanc should win the Good Sport of the Decade Award for going along with this merciless lampoon of himself.

The Hollywood of Episodes is populated by stupid, jealous, vain, lying, paranoid hacks, whose only real talent is looking out for their own interests. This week, Pucks is put on hiatus, sending everyone scrambling for new opportunities even in the middle of filming an episode. Only Sean clings to the notion of quality. He refuses to shift one character’s dialogue to another character after an actor abruptly leaves the production for a Michael Bay movie. "There’s an internal logic!" he insists.

The poor guy hasn’t come to terms with the fact that he’s working in an industry with no logic whatsoever. 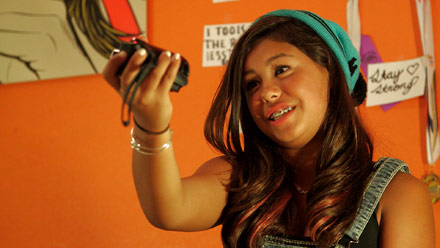 Generation Like explores the sinister side of social media, specifically the way big business uses it to manipulate today’s kids. Companies have perfected a method of turning "likes" and "follows" into money, and step one is getting youngsters to obsess on their products. It turns out to be incredibly easy to turn the new generation into marketing stooges.

Take Tyler, a narcissist who has amassed a huge following by saying stupid stuff on YouTube. All Taco Bell had to do was offer a few perks to say stupid stuff about their Cool Ranch Doritos Locos Tacos, and voilà: They get cheap viral marketing for their product. True, that means Generation Like is even more likely to grow obese from its addiction to junk food, but why would Tyler care? The documentary portrays a cohort made amoral by social media, which encourages attention-seeking at the expense of all else.

"Selling out is not selling out anymore," a commentator says. "It’s like grabbing the brass ring."

Generation Like had me fearing the younger generation and — this is weird — also craving one of those Cool Ranch Locos Doritos Tacos.

The Annual Crispy Awards 2013: Fringe Toast Picks the Best Songs of the Year