Passenger pigeons were once so plentiful they filled the skies. This hunting scene is from a 1870s newspaper.

In 1914, the last surviving Passenger Pigeon died in the Cincinnati Zoo, ending a half-century in which the pigeon population declined from billions to one and then to none as a result of uncontrolled hunting. To mark the 100th anniversary of the loss of one of the world’s most abundant birds, the Leopold Center for Sustainable Agriculture presents renowned ornithologist and wildlife biologist Stan Temple.

Temple uses the case of the Passenger Pigeon to call attention to the world’s ongoing extinction crisis and our relationship with other species. His presentation, “The Extinction of the Passenger Pigeon: Lessons from the Past for a Sustainable Future,” will begin at 7 p.m. on Thursday, March 6, in the Great Hall of the Memorial Union at Iowa State University, Ames. 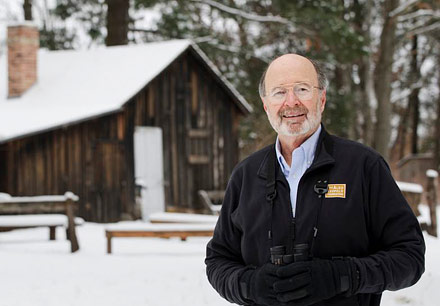 Dr. Stan Temple outside of the Leopold Shack in Baraboo, Wisconsin.

“Just as we should never forget the tragic story of the Passenger Pigeon,” Temple says, “we should fully understand its lessons for today and the future.”

Temple is Senior Fellow and Science Advisor to the Aldo Leopold Foundation in Baraboo, Wisconsin. For more than 30 years, he was the Beers-Bascom Professor in Conservation in the Department of Wildlife Ecology at the University of Wisconsin-Madison, a position originally held by Aldo Leopold. Early in his career, he studied endangered species on islands in the Indian Ocean and led a peregrine falcon reintroduction program at Cornell University. 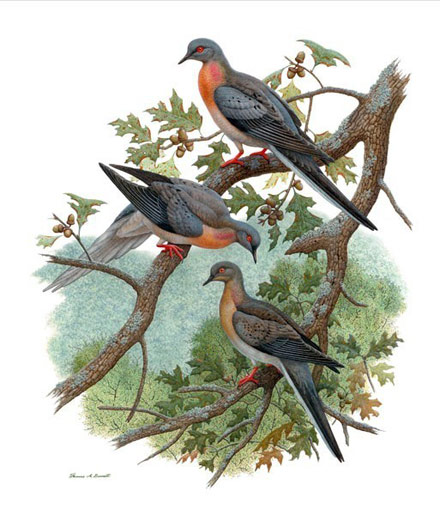 A painting of the Passenger Pigeon, Ectopistes migratorius, by Thomas A. Bennett.

Leopold wrote about the bird in 1947, when the Wisconsin Society for Ornithology erected a monument to the Passenger Pigeon at Wyalusing State Park near the confluence of the Mississippi and Wisconsin rivers close Prairie du Chien. His essay, one of the most poignant pieces written about extinction, later appeared in his classic book, A Sand County Almanac.

Also called “the blue pigeon” for its delicate coloring, the Passenger Pigeon was native to North America. Flocks of a million birds or more could denude fields and ravage woods in search of food. Pigeon hunts were a popular sport and the birds were stewed, served in pies, boiled and pan fried. By the turn of the century, however, it is believed that the once prolific species no longer lived in the wild.

“This was an era of extreme resource depletion,” notes Leopold Center director Mark Rasmussen. “But we also can find examples of similar destruction today that hit pretty close to home and are closely linked with our own existence.”

The lecture is co-sponsored by the ISU Department of Natural Resource Ecology and Management, the Graduate Program for Sustainable Agriculture, the College of Agriculture and Life Sciences and ISU Lectures. For more information, visit The Leopold Center or call (515) 294-3711.

It's All in Your Head: "Mind Games" | Con Artists Experiment with Psychology in Mind Games