Dame Judy Dench (nominated for Best Actress) is extraordinary in this film based on real people and events. Dench plays Philomena, a retired nurse, who decades earlier as a young unwed mother was incarcerated (there’s no other word for it) in a residential work facility run by Catholic nuns in Ireland and then forced to give up her baby for adoption.

This movie could be a companion to 2002’s Magdalene Sisters, a harrowing film that intimately portrayed the humiliating ordeal of three girls in such an institution, also based on three real women. 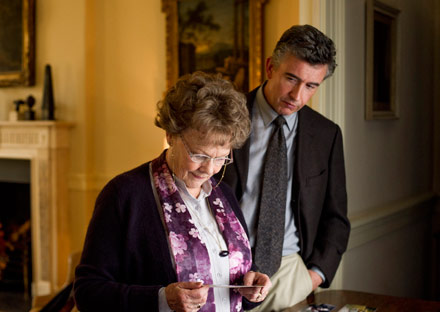 Steve Coogan plays Martin Sixsmith, a writer and journalist who meets Philomena and starts chronicling and aiding her attempts to track down her long-lost son. Sixsmith starts off as an investigative journalist pursuing a story that uncovers scandalously evil practices by the Irish Catholic Church. But he gradually becomes deeply invested in Philomena’s quest, moved by the purity and goodness of her heart, charmed by her simple down-to-earth personality, and pained by the suffering, guilt, and grief she feels over the loss of her son.

This is a finely acted, finely crafted film that moves back and forth between the past and the present, telling a poignant engaging story, with Dench embodying the human heart of it.

It's a Gosh-Darned Interesting Thing to Say