In a stunning one-man show called Ghetto Klown (Saturday, 9 p.m., HBO), John Leguizamo presents a "cautionary tale." He details his progression from a poor Latino boy to a showbiz star to a jerk.

Leguizamo may be the most appealing jerk in Broadway history. He gets the live audience laughing at his colorful life story, always making himself the butt of the joke. With an assist from video, sound effects, impressions, Spanish slang and expressive movement, he acts out his first fumbling attempts at performance on a Queens subway car. A series of mentors encourages his theatrical talent, leading to TV and movie roles and even acclaim as a playwright. Why, then, does his life keep bottoming out? Leguizamo will explain it all for you, and rarely has failure been so entertaining.

With his genius for baring his soul via raunchy comedy, Leguizamo recalls Richard Pryor. But his influences stretch back even farther, to the philosopher Ralph Waldo Emerson – that’s evident in his quintessentially American self-reliance. Ghetto Klown ends with Leguizamo transforming himself into a better man, based on hard-won insights from his psychic journey. And I bet, were he around, even Emerson would be break-dancing to the celebratory blast of hip-hop music over the credits.

A nuclear apocalypse has killed all the inhabitants of Earth except a group that escaped to live in outer space. But after a century, their space station is becoming overpopulated, so the group’s authoritarian leader decides to send 100 juvenile prisoners back to Earth to see if it’s become habitable again. If it hasn’t, and the kids die, no biggie.

The 100 takes its cheesy premise so seriously that it’s enjoyable in a bad-TV kind of way. You won’t be surprised to learn that the 100 juveniles are a compendium of CW teen-drama types, wearing cute post-apocalyptic outfits. There’s the roguish hunk, the good blond girl and the bad dark-haired girl who won’t let even mutant snakes stop her from seducing all the guys in the group. For all its high-mindedness, the sci-fi concept is just the CW’s way of begging permission to parade another bunch of gorgeous young actors across the screen.

This new series bills itself as “the greatest home-renovation competition show of all time.” It tries to outdo its many rivals by tapping established designers rather than the usual bunch of wannabes. A sneering European cad named Lukas calls himself “The Bad Boy of Design,” suggesting that we’re in for a season’s worth of naughty fun.

But the pilot simply offers the same bickering, blaming and bragging you see on every other home-renovation show. Given that this is a prime-time broadcast-network extravaganza, you’d expect more exciting plot points than how to turn a kid’s bedroom into a den.

Even Lukas lets us down, creating a piece of furniture that everyone agrees is terrible. Turns out that the self-proclaimed Bad Boy of Design is really just Bad. 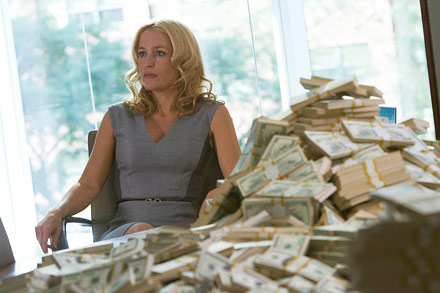 In this new drama, criminal masterminds led by a former CIA analyst (Dermot Mulroney) kidnap a bus full of high school kids with the intention of blackmailing their well-connected parents. Last week I raved about the pilot, but episode two settles into familiar thriller territory, with fewer surprises. An FBI agent (Rachael Taylor) and Secret Service agent (Lance Gross) who team up to foil the kidnappers don’t have much chemistry. And it’s hard to buy into the subplot about a powerful CEO (Gillian Anderson) who goes rogue to save her daughter.

The best thing about Crisis is the complicated relationship between the Mulroney character and his daughter (Stevie Lynn Jones), who’s one of the kidnapped kids. She doesn’t realize he’s a bad guy, as he pretends to be a parent chaperone who got nabbed along with everyone else. Her mixed feelings about him, and his mixed feelings about her, are enough to carry me into episode three.

Story of the Jews with Simon Schama
Tuesday, 7 pm (PBS)

The words “Simon Schama” in the title are a guarantee of quality. As with Simon Schama’s Power of Art and Simon Schama: A History of Britain, the British historian applies his keen intelligence to a potentially untelegenic subject —the 3,000-year-long Jewish saga – and turns it into riveting TV. Schama hosts with his emphatic way of speaking and restless movements. He also writes himself into the story as a man trying to figure out what he and his fellow Jews, past and present, have in common.

In episode one, Schama provides an answer: a story. It’s the ongoing story of suffering and survival, kept alive in Jewish heads and hearts. Schama tells part of that story tonight, including the Romans’ decimation of Jerusalem in A.D. 70. How did the Jews survive this potentially religion-ending holocaust? Schama’s explanation is so moving I’m going to quote it in full:

“Words, copied, memorized, internalized, made unforgettable, will beat swords anytime. You can’t hold words captive. The Roman Empire has come and gone, but go into a synagogue any Saturday and you’ll still hear those words.”