Bryan Hancock and Jan Swinton work to get the greenhouse ready for spring planting.

As you head north over the railroad tracks on 9th street in Fairfield, on the left you’ll see the new greenhouse tucked incongruously behind a factory owned by Schaus-Vorhies Companies. Not only will this groundbreaking greenhouse provide fresh food for local schools, but it will do it in an ingenious way. In fact, just about everything about this greenhouse is an experiment, from the heating system, to the kinds of food that will be grown, to its very existence as a USDA farm-to-school growing operation.

The greenhouse is part of the USDA’s push to incorporate more local foods into  school lunch systems. All of the produce grown there will be sold directly to Fairfield Community School District’s lunch program, according to Jan Swinton, the local food coordinator at Pathfinders Resource Conservation and Development.

Why would you choose to grow food for children on an industrial site when you live in a town surrounded by rich Iowa farmland? The answer lies in a rusty rectangular structure just outside the factory called a baghouse, whose purpose is to remove air particulates from sandblasting in the factory before the air is released outside. At its hottest, the air is 1600 degrees F. and it must be cooled to 350 degrees before it can enter the baghouse for filtration. 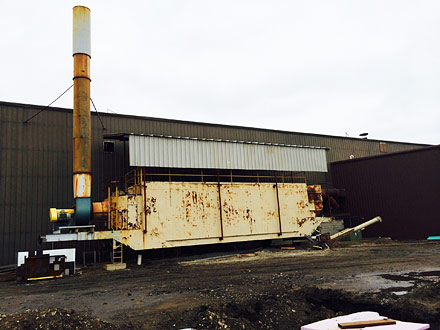 It doesn’t look like much, but the baghouse is the key to whole operation.

The greenhouse is in the ideal location for taking advantage of that 350-degree air. Water from an insulated tank is circulated through piping that has been placed in the baghouse and heated by the filtered air before the air goes up and out of the stack. The hot water is then pumped through pipes buried four feet underground in the greenhouse, transferring heat to the soil.

Jan Swinton was able to secure the very first grant in USDA history for implementing the first local farm-to-school program in Iowa. But only $12,000 of the $100,000 grant was allocated to the greenhouse project, which just covered building the basic structure. That meant Jan had to get creative and do a lot of fundraising in order to raise the additional $68,000 needed to secure the water, electrical, and heating systems. 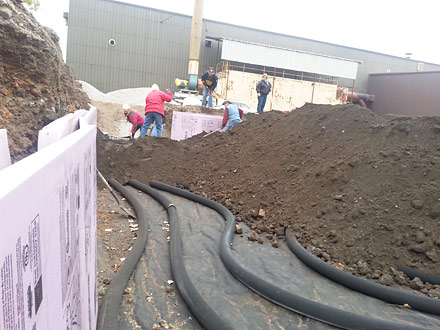 Volunteers installed earth tubes that will heat the greenhouse.

Schaus-Vorhies gave the use of the land and agreed to pay for water and electricity for the next 25 years. Jefferson County donated a 17,000-gallon road-tar tank, which was cleaned up and insulated, and now serves as a holding tank for hot water when the baghouse is not running. Many other individuals and organizations donated their time, skills, and money, too. 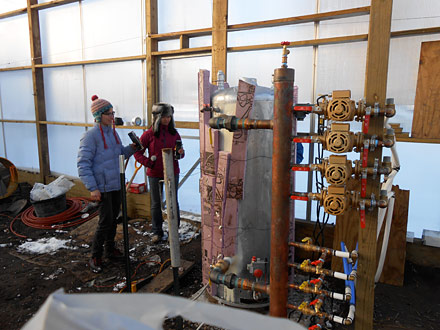 The result is an impressive structure with an innovative heating system that uses earth tubes, an irrigation system, and sensors that monitor the soil and air temperature. The final touch is a four-foot layer of organic soil over a layer of sand. 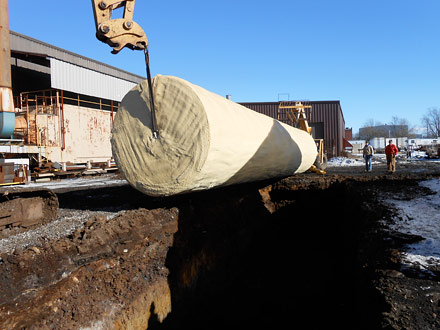 Freedom Foam insulated the 17,000-gallong tank before it was buried 4 feet below ground surface.

“This is a total big experiment,” Jan tells me as she gives me a tour of the facility’s features. “We’ve got a lot of theories that we’re going by and a lot of engineering practices that we think should work. But actually, nobody’s done this.”

And that’s just the beginning of the experiment. According to Jan, a greenhouse this size will grow about $12,000 to $15,000 worth of produce and all of it will be sold directly to the Jefferson County School District at prices comparable to what they’re already paying.

But there will be some challenges involved in producing it. “The hard part about farm-to-school is that the easiest time to grow the food is when there are no kids there at school,” Jan says. The greenhouse staff also needs to figure out what to grow that the kids will actually eat and that the school kitchens will be able to process. 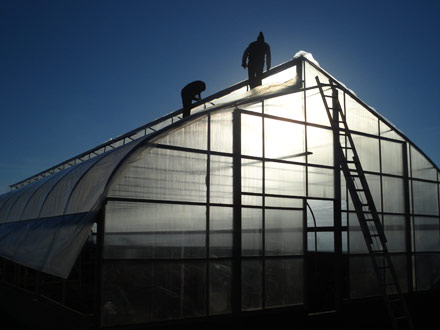 Volunteers worked all hours to complete the greenhouse.

At first the greenhouse will focus on producing raw vegetables for the schools’ salad bars, but eventually they may branch out to growing produce like green beans, peas, and tomatoes that can be processed for later consumption. “A lot of other systems have avoided green beans because they’re kind of expensive labor wise to harvest and process,” Jan explains. “But the kids will eat these. And so you’ve got to weigh the differences here. . . . We want to have things that the kids will eat. We want success.”

And kids definitely seem to prefer frozen vegetables to canned ones. Jan tells me that the staff at different school kitchens have told her they have to put out four times as many peas when they serve frozen peas instead of canned.

Another thing the kids are sure to like eating? Strawberries! Jan is hoping to raise an additional $5,000 to grow this popular fruit in hanging baskets.

Students won’t just be eating the vegetables from the greenhouse. They’ll be helping to grow and harvest them, too. Visiting students will even be contributing their lunch leftovers to the greenhouse compost.

Jan hopes to place webcams around the greenhouse so that students can plant a bed of spinach and then visually monitor its progress from their science classrooms, making predictions about how well the spinach will do based on information from the temperature sensors.

“They can do their own predictions,”â€ˆJan says. “They can say, ‘Wow! It got down to 34 last night; did the spinach die?’ Because they know that 40 is what you’re supposed to have for spinach. Spinach won’t die at 34 but we’ll let them figure that out.” 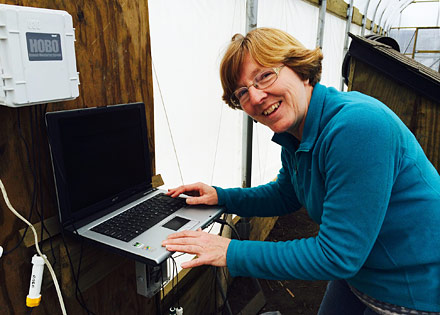 It turns out that I am visiting the greenhouse on a very exciting day in March. Master gardeners from Iowa State University have recently planted beds of spinach, salad greens, peas, and carrots, but Jan has held off irrigating them until the main heating system was completed and running in order to avoid having the seeds sprout and then freeze. But finally the greenhouse is ready for the first crop to start growing, and Jan can’t wait. “Once you get the water going and you can smell the dirt, it really starts to smell like spring.”