Jim Carrey will be the commencement speaker at Maharishi University of Management’s graduation ceremony on Saturday, May 24, 2014 in the Golden Dome on the MUM campus.

For more than three decades, Carrey has brought laughter and happiness to millions all over the globe. In recognition of his significant lifetime achievement and the joyful gifts he has given to the world, the University Board of Trustees will present Mr. Carrey with the degree of Doctor of Philosophy Honoris Causa.

In 2013, Carrey released his first children’s book, How Roland Rolls, which received the Gelett Burgess Children’s Book Award for contributions to children’s literature. In addition to the book, a four-song EP with songs written and performed by Carrey and his daughter Jane was release on iTunes as well as an enhanced e-book version.

“Mr. Carrey’s wisdom, deep clarity, and compassion — as exemplified in his profoundly charming book, How Roland Rolls — has captured and inspired many of us in this meditating community,” says professor and trustee John Hagelin. “The classical message of Vedanta, of enlightenment and universal love, so charmingly told and accessible to children, is a precious contribution to humanity in its own right.”

Carrey is also a celebrated painter and sculptor.  He won rave reviews from critics at his debut art exhibit “Nothing To See Here” in Palm Desert in 2011.

Carrey spoke last fall to students in the new David Lynch Master’s in Film program at MUM. He has actively supported the David Lynch Foundation’s campaign to bring the TM technique to at-risk young people, veterans with PTSD, and women and children who are survivors of domestic abuse.

Jim Carrey will be the commencement speaker at Maharishi University of Management’s graduation ceremony on Saturday, May 24, 2014 in the Golden Dome on the MUM campus.

Carrey will next be seen starring in the comedy Dumb and Dumber To, reprising his role as Lloyd Christmas in the long-awaited sequel to Dumb and Dumber. The film is set to be released in 2014. 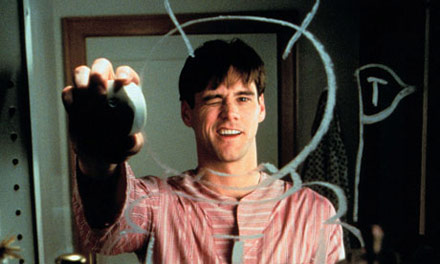 Jim Carrey in The Truman Show.

Over the course of his career, Carrey has been recognized by the MTV Movie Awards, People’s Choice Awards, and Nickeldeon Kids’ Choice Awards. He won a Golden Globe Award for Best Actor in a Motion Picture – Drama, for the title role in Peter Weir’s The Truman Show. He won his second Golden Globe, for Best Actor in a Motion Picture – Musical or Comedy, for his portrayal of comedian Andy Kaufman in Milos Forman’s Man on the Moon. Other film credits include I Love You Phillip Morris, Yes Man, Eternal Sunshine of the Spotless Mind, for which he received Golden Globes and BAFTA Award nominations for best actor in 2004, Bruce Almighty, Liar, Liar, Ace Ventura: Pet Detective, and The Mask.

In 2005, Carrey founded The Better U Foundation (BUF), which addresses global food security and helps rice farmers earn a better living for their families by supporting the System of Rice Intensification (SRI).

Portrait of the Artist as a Young Mensch: Billy Crystal | In 700 Sundays, Billy Crystal Explores the Forging of a Jewish Comedian's Soul