Billy Crystal performs his Tony-winning one-man play 700 Sundays before a live audience, telling the story of his wonderful, horrible Long Island childhood (Saturday, 8 p.m., HBO). He stands in front of a brick façade that evokes his modest abode, with home movies and photos from the 1950s and ‘60s flashing on the walls. “When I was a kid,” he says, “I would do anything for a laugh.”

Well, little has changed. 700 Sundays is a tour de force of jokes, impressions, tap-dancing, funny faces and pantomime as Crystal lovingly reanimates his meshugga Jewish household. For an established star in his 60s, he still has the manic energy of a Borscht Belt comedian trying to break into the big time. He delivers the script’s well-crafted lines at breakneck speed, his dial turned up to 11.

It’s a virtuosic display, lending the performance a heightened, theatrical quality. We’re plunged into a phantasmagoria of chain-smoking aunts and phlegmy grandparents, each characterized with the precision of a master novelist. At the center of the madhouse, taking it all in, is young Billy, who finds his vocation doing standup for family members in the living room.

For all its belly laughs (and believe me, you will be sore), 700 Sundays is ultimately a poignant remembrance of things past. The show’s title comes from Crystal’s calculation that he had 700 glorious Sundays with his father by age 15, when an untimely heart attack spoiled all the fun. He develops an uncanny intimacy with the audience by confessing his doubt and pain. At the same time, he undercuts the sentimentality with absurdist humor.

I believe the technical phrase for this feat is “work of art.”

Last year, this human-cloning drama started with a bang. A London punk named Sarah (Tatiana Maslany) stumbled on a secret world after witnessing a clone of herself commit suicide. Maslany was impressive as a woman seeking the truth, but she’s become less impressive as three women seeking the truth. At the start of season two, she’s playing Sarah and her clones Alison and Cosima, and the additional characters don’t make much of an impression. Neither does the now-confusing plot, involving a sinister company that’s fooling with Mother Nature.

Right now, I’m more freaked out about its catastrophic effect on the once-promising Orphan Black. 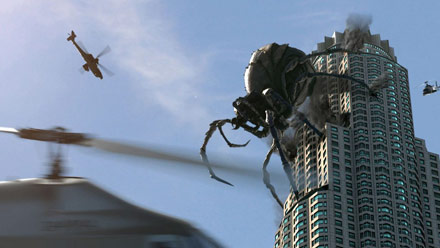 You probably don’t require the services of a TV critic to explicate this creature feature, in which an alien spider terrorizes Los Angeles. But I will offer one insight, for what it’s worth: The title is not false advertising. 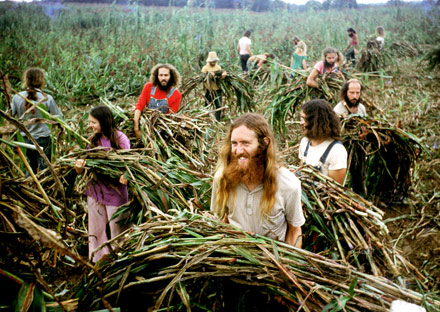 Members of "The Farm," a utopian commune near Summertown, Tennessee, harvesting sorghum, from A Fierce Green Fire. (Photo courtesy of David Frohman and Gerard Wheeler)

A Fierce Green Fire is an inspiring account of the environmental movement from the 1960s onward. Robert Redford, Meryl Streep, Ashley Judd and others hand off narration of individual chapters, dealing with such key themes as ecology and climate change. The parade of heroes includes David Brower, who mobilized the Sierra Club against nature-killing dams; and Lois Gibbs, who demanded action over toxic waste at Love Canal.

The parade of villains includes business executives and politicians who cared less about the planet than about the almighty dollar. Chief among them is President Ronald Reagan, who brought environmental progress to a screeching halt in the 1980s. Not only did Reagan hand over the Environmental Protection Agency and the Department of the Interior to corporate interests, but he sneered at the very idea of conservation.

"There is environmental extremism," he says in one clip. "I don’t think they’ll be happy until the White House looks like a bird’s nest."

A Fierce Green Fire is a testament to citizens’ power to preserve our one and only Earth. The White House doesn’t look like a bird’s nest yet, but if we all work together, maybe it will one day.

In this new series, best pals Amy (Rita Volk) and Karma (Katie Stevens) are high school nobodies trying desperately to be popular. Then they’re mistaken for lesbians, which turns out to be the ticket to success at their hyper-progressive high school in Austin, Tex. Karma wants to milk the ruse for all it’s worth, while Amy is skeptical. “Please, being gay finally made me interesting!” Karma pleads.

If Amy and Karma recall madcap female duos from TV history (they even name-check Lucy and Ethel from I Love Lucy), Faking It is still an up-to-the-minute bulletin from the high school battleground. The delightfully wordy script captures the way cynical teenagers snark and snipe at each other in 2014 – not to mention the way they occasionally support each other, too. Even the minor characters jump off the screen, especially a mean girl (Bailey Buntain) determined to keep Amy and Karma from turning the social pyramid upside down.

“There is a natural order to high school,” she whines, “and all this is against nature!”

In this particular war against nature, Faking It wins.