This Saturday, May 3, and Sunday, May 4, 300 artists will use more than half a ton of chalk to turn Mount Vernon’s Main Street into a work of art. Festivalgoers can enjoy the art and even create some of their own from 10 a.m. to 6 p.m.

This year’s event will be a juried art festival, and will include awards for 22 artists and more than $1,200 in cash prizes. Last year’s 1st Place Winner, Beth Drilling, will return to the event as this year’s featured artist. Festivalgoers will also have the chance to participate in a collaborative art piece.

New this year will be a large area designated as a Kid’s Zone where children will can create original art pieces in a parking lot set aside just for them. Returning this year will be a Culture Fair presented by students from Cornell College featuring international foods, music, and dance from several countries. At the other end of the festival grounds will be a music stage that will include a Sunday morning drum circle and performances throughout the weekend by several musicians including Gayla Drake, Two Bit Maniac, Kevin “B.F.” Burt, Heart Consort Music, and Kimberli Maloy. 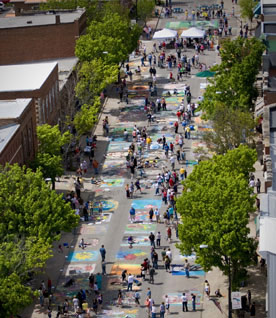 Birds-eye view of Chalk the Walk.

Chalk the Walk is based on an original art form that began in Italy in the 16th century. Called Madonnari, this form of public art was originally done by street artists hoping to collect coins from passersby. Images back then were based on religious themes, and as the Madonna was a popular subject, the artists became known as the “Madonnari.”

Finding Vivian Maier | Everyone Knew Her as a Nanny, But She Had a Secret Life